It *Usually* All Evens Out in the End

However, let’s snap back to reality. 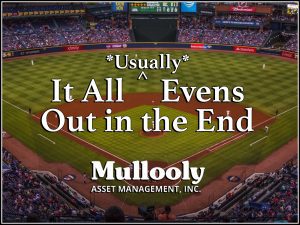 The Mets are 18-17, and most Mets fans are acting like the season is over, and they should just pack up and get ready for next year.  It feels as though the Mets are the worst team in baseball despite what their actual record says.

Well, to start this season the Mets jumped out to a ridiculous, scolding-hot, 11-1 record.  The best in baseball.  They could do nothing wrong.  NOTHING.

New manager Mickey Callaway was a GENIUS!  Every move he made turned to gold, and the Mets couldn’t stop winning.

Was it sustainable?  Of course not, but it was fun nonetheless.

What happens all too often after a long winning streak, whether it’s in baseball or the stock market?  That’s right.  Mean reversion.

Mean reversion happens all the time.  Sometimes it’s drastic, and sometimes it’s a slow and steady slide back down to the mean, but it happens.

Unfortunately for the Mets, for how great the 11-1 start was, the rest of the season so far has been equally as terrible.

They have gone 7-16 since then which qualifies them for the worst record in the National League.  They quite literally went from BEST to WORST in the blink of an eye.  The pitching has been shaky, the bullpen is overworked, the hitters can’t hit, and Mickey Callaway doesn’t quite seem like the genius he was the first two weeks of the season.

The Mets still have 127 games left in this season.  That is A LOT of baseball, and being 18-17 right now is not the end of the world.  In fact, it’s pretty much in line with where many experts thought they were going to be.

The violent moves in their record however make it FEEL worse than it is.  Violent highs and violent lows essentially even out to middle of the road.

The EXACT SAME THING happens all the time with investing.  It’s similar to active funds versus an index that end up in the same spot.

The very active fund is going to have some periods of outperformance, and plenty of periods of underperformance while the index will most likely trot along with both ending up in about the same place. 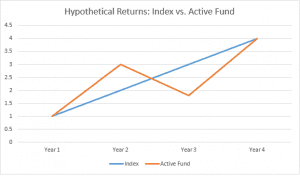 For people trying to look for those active funds to capture the outperformance periods in these funds, look to places like Active Share to find out just how active funds are.  What is Active Share?

Active Share is a good way to determine if you are paying for an active fund, that you’re actually GETTING a truly active fund.  Active Share has been great at outing “closet indexers”, or managers that claim to be active, but really just very closely stick to the index they are tracking.

Active Share is also good to make sure that investors are getting what they paid for.  Active funds are inherently more expensive than an index fund with the idea that they will outperform.  However, if the fund is not actually outperforming, and ends up in the same spot as the index when all is said and done, what did you pay for?  You essentially paid more to have your emotions whipped up and down for no added return.  Active Share can help you determine if a fund is truly active, and truly worth paying more for.

When it comes to active funds, a lot of times you will get performance similar to what the Mets have experienced so far this year.  Some crazy good ups, and some rough downs.

Whether it’s a professional sports team on a cold streak, or an active fund reverting back to the mean and underperforming, it becomes easy to jump ship.  However, it will cost you significantly less money to stop rooting for a team, than it will to jump out of an investment.

The shift towards “passive” funds, or index funds, over the last few years is partially due to the fact that people are realizing they can’t emotionally handle the moves that these active funds provide.  Everybody wants all of the upside, but none of the downside.  Unfortunately for us, that’s not the way active investing works.  Even more unfortunate for us, many people jump off the ship at the bottom.

Will this Mets rough patch last forever?  Probably not.

Will your active fund outperform/underperform forever?  Probably not.

It’s just important to understand if it’s worth your emotional, and physical stress.