How Often Should You Expect Average Stock Market Returns? 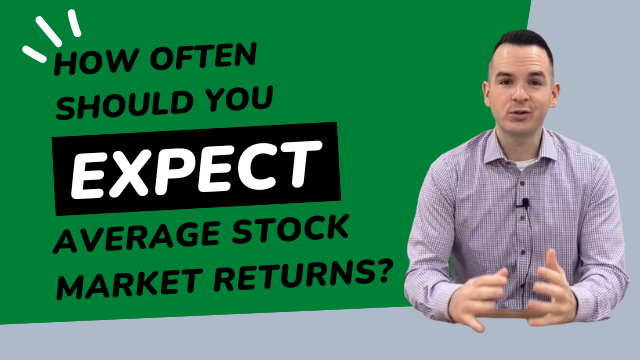 We are often asked “what can I expect my portfolio to return each year?”. Historical stock market returns offer an answer. But that answer doesn’t do a good job of setting expectations because average returns don’t happen very often.

In this week’s video, Casey discusses how often you can expect average returns from the stock market… it’s less than you think!

Casey Mullooly: How often can you expect average returns from the stock market? Keep watching to find out.

Welcome back to the Mullooly Asset Show. I’m your host, Casey Mullooly. Happy to be back with you here for this week’s episode. So we talk a lot about average returns because it’s important for investors to know what to expect. We get a lot of people wanting to know, well, what can I expect from my investments each year?

Or sometimes people want to, especially in retirement, people want to just live off their principle. And if they can expect a certain number gain each year, then they just want to take out the gains and live off that. But in theory, these ideas sound good, but just because stocks average this each year and bonds historically average that each year, doesn’t necessarily mean that it’s going to be a smooth ride.

So Ryan Dietrich of Carson Wealth Management looked at this exact topic. He looked at how often can we expect average returns in the stock market, and the number is pretty surprising. Ryan went back to 1950, so we’ve got 72 years worth of data here, pretty good sample size, and the S&P 500, the stock market returned 9.1% on average each year during that time period, 9.1%. So then he looked at what percentage of the time were the actual returns of the year between eight and 10%.

So this is really important information, especially when we’re building financial plans for people. Sometimes people say, well, I can get 9% a year. It’s going to be a smooth 9%. So we project that out into the future and they draw whatever conclusions they will from that.

So just because you expect average year after year as the data shows, that is not going to be the case, and if you do expect that, you’re going to be in for a bumpy ride. So it turns out average isn’t so average after all.

That is the message for this week’s video. Thanks as always, for tuning in. We’ll be back with you next week.