Active Funds: Is Being Different Worth the Risk? 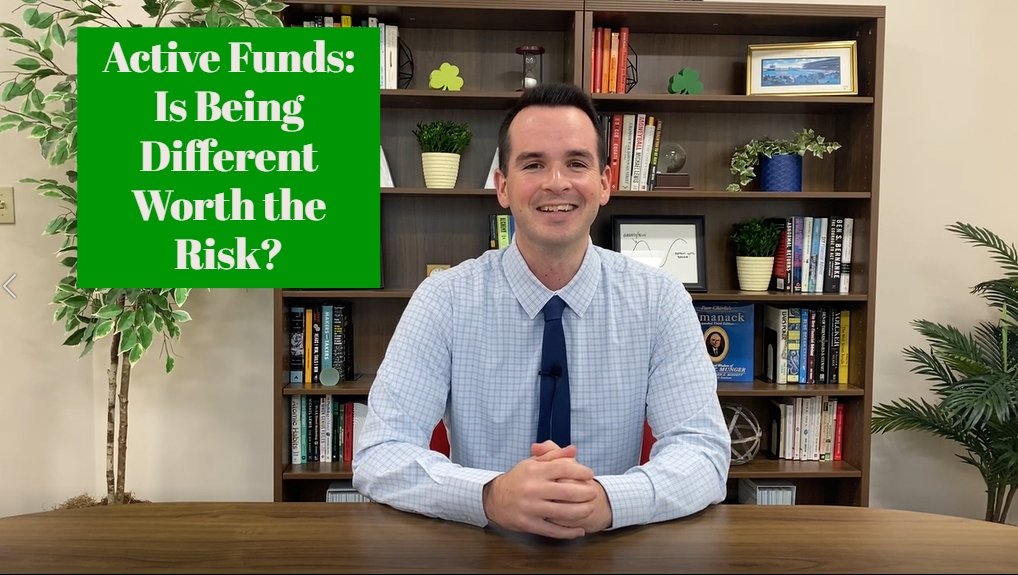 In this week’s video, Casey discusses a research report from Morningstar that details how active funds have recently compared to their passive counter parts.

This question drives at what makes investing so difficult, and interesting. So it’s useful to put some numbers behind this age-old active vs. passive debate.

Ultimately, every investor has to decide what is the right approach for their situation.

Active Funds: Is Being Different Worth the Risk? – Full Transcript

Casey Mullooly: Episode 269 is all about being different. Keep watching.

Casey Mullooly: Welcome back to the Mullooly Asset Show yes, I know what you’re are all thinking, he’s got the tie on. This is episode 269 and I’m your host Casey Mullooly, thanks as always for tuning in.

Casey Mullooly: So this week we’re going to talk about the active passive barometer report, which is a semi-annual report from Morningstar. I follow Ben Johnson who’s the director of global ETF research over at Morningstar on Twitter. Great follow. He tweeted this out a couple days ago, and like I said it’s a semi-annual report that checks up on how these active funds are comparing to their passive benchmarks.

Casey Mullooly: So just refresher for those who may not know and don’t crucify me for simplifying this, but passive funds are funds that track broad based indexes like the S&P 500, the NASDAQ, there Russell 2000. They like I said track the index and want to follow that as closely as possible. They tend to make less changes and just follow the broad based index.

Casey Mullooly: Whereas active funds are exactly that, they’re active, they’re making changes. Their goal is to outperform the benchmark and the way they do that is by being different.

Casey Mullooly: So let’s dig in a little bit more shall we? Only 27% of active large growth funds, so large growth, their benchmark is the S&P 500 or the Russell 1000, these are the biggest names like Apple, Amazon, the biggest, most familiar names that everyone knows pretty much, only 27 and a half percent, so just about a quarter, a little more than a quarter, of active large growth funds were able to beat their passive benchmarks in the last 12 years. And this goes back even further than that if you look over the last decade, only 25% of active funds were able to beat their passive counterpart.

Casey Mullooly: So what am I trying to say here? What I’m saying is beating the index and beating the market requires you to be different. Said another way, being different requires more risk, and more risk is both how you get more out performance, but also how you underperform. It can juice your returns up to the upside but it can also hurt your returns on the downside and cause you to underperform.

Casey Mullooly: So yes, some of the counterarguments to the statistics that I’ve laid out are is if you looked at a different timeframe these numbers would be way different. So yeah, we talked about it on a recent podcast actually how active funds tended to do better in the 2000 to 2010 decade, but now over the last decade, I can’t even say decade now because we’re into the twenties, geez. But over the last 10 or 11 years it’s been the exact opposite where we’ve seen these more passive funds tend to do better and active funds tend to underperform.

Casey Mullooly: So I’m going to leave you all with a question, and that question is, is being different worth it? Is being different worth the risk? And those are questions that we help folks decide and we have our own internal views on, but it’s something that every investor has to decide for him or herself. So think about that one, chew on that, and that’s going to wrap up episode 269, have your answers ready for 270. We’ll see you then.