Not All Stocks That Crash Come Back 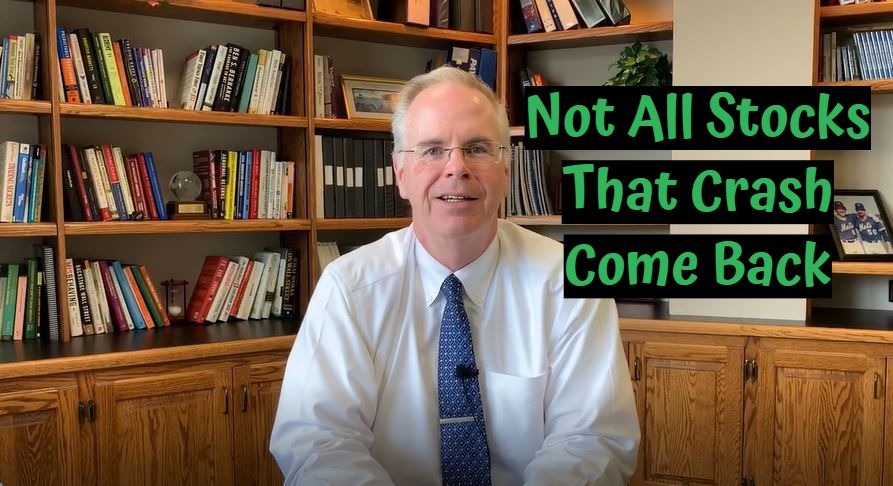 In Ep. 195 of the Mullooly Asset Show, Tom explains how dangerous speculating on stocks that have crashed can be.  Not all stocks that crash make it back to their previous levels.  Some go away for good!  He talks about the activity going on at Robinhood with some “crash candidate” stocks like Hertz.

Not All Stocks That Crash Come Back – Transcript

Tom Mullooly: In Episode 195, we’re going to send out the reminder that not all stocks that crash become good values. You’re definitely going to want to tune into this one.

Welcome to the Mullooly Asset Show, I’m your host, Tom Mullooly. This is episode number 195, thanks for tuning in.

When markets drop people hear all the time that you should buy the dip. I want to clarify that when people say, “Buy the dip,” they’re talking about buying the market, not buying individual stocks. Stocks crash all the time and not just because the market’s down. Leaving aside all of the discussion about risk and owning one single stock in your account, understand that some companies crash and they never make it back. Piggybacking on the last episode, Episode 194, we talked about Chapter 7 bankruptcies and Chapter 11, bankruptcies. Chapter 11 bankruptcy gives businesses time to negotiate, and operate, and work out a deal. But you’ve got to understand, some companies just never make it out of the Chapter 11 bankruptcy and they wind up going into liquidation, that’s Chapter 7.

That brings us to the speculative side of Wall Street. See, there’s an investing side, and then there’s a speculative side, and there’s plenty of speculation going over on at Robinhood. Robinhood is an app, and you can get it on your phone and you can trade stocks just, like you can do a lot of things today. It appears that the hot theme at Robinhood lately is buying these companies where their stocks have crashed. This is true vulture speculation going on, and when people ask us about this all the time I always say, “Hey look, understand even a blind pig finds an acorn every now and then.” You might get lucky with one of these names over at Robinhood, but the odds are it’s not going to work out very well. I just want to walk through a couple of names, and just show you what’s happening over at Robinhood.

In the last three months, Hertz Rent A Car has filed bankruptcy. They’ve got $19 billion in debt, they’re already dumping their rental cars on a website online. You should also know that Hertz Rent A Car lost $58 million in the last quarter, and they’ve laid off more than 25% of their employees. That’s about 16,000 people out of work, but yet there’s a guy with a YouTube channel, he’s got 7,500 subscribers. He’s recommending the stock, and he’s also recommending buying the January calls, these are options, and he’s also recommending selling the January puts. This is reckless, the company may not even be around in January. People ask us all the time, “Hey, what do you think about this stock? It’s a dollar, what’s the risk?” The risk is 100% loss, you could lose everything. Remember, like we mentioned in the video last week, when a company goes into liquidation, or even when they’re in bankruptcy, often the common stock gets canceled.

This is a stock that could be a completely worthless investment pretty soon, so I want you to understand that’s not an investment and it’s certainly not a recommendation to get mixed up in Hertz Rent A Car. We do have a couple of subscribers who watch the videos, they’re not really listening, and they’ll call us up afterwards and they’re saying, “So should we be buying Hertz Rent A Car?” No, it’s not. Red hat, if you’ve got money at… red hat, at Robinhood, understand that that’s Vegas money. That’s really what this is about, it’s pure speculation, it’s not long-term investing. It’s certainly not stuff that we’re going to get mixed up in here, you probably shouldn’t either, but it sure is interesting to watch and see how speculators pile into these stocks when they get down to the single digits.

We’ve got a lot more examples besides the names that I mentioned in this video, you should also check out robintrack.com. It tracks everything going on over there, interesting speculation. Thanks for watching Episode 195, see you next time.