One Reason Why Dividends Matter 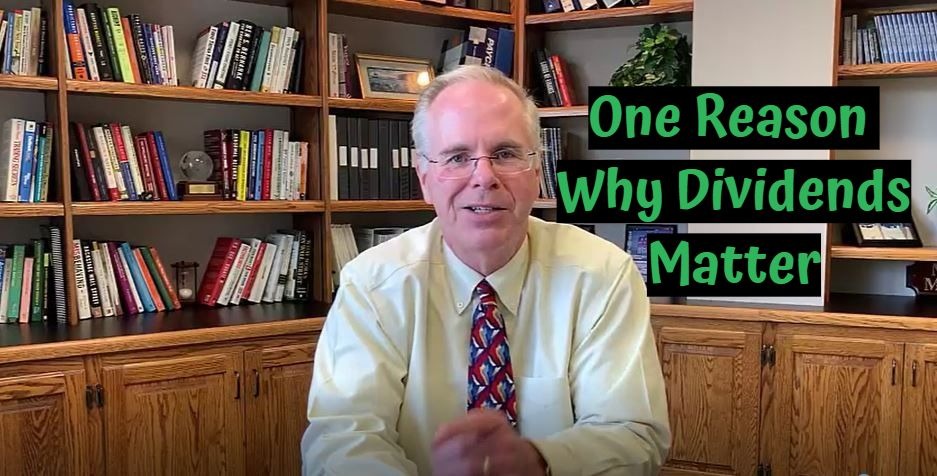 In Ep. 196 of the Mullooly Asset Show, Tom talks about stock dividends.  When it comes to investing, there is one main reason why dividends are important.  Two words: TOTAL RETURN.  It’s important to keep track of your own personal investments with total return, and not just the nominal return.

‘An Easy Concept to Grasp’ – The Chicago Tribune

One Reason Why Dividends Matter – Transcript

Tim Mullooly: In episode 196, we talk about the one reason why dividends matter, so stick around. Welcome to the Mullooly Asset Show. I’m your host, Tom Mullooly and this is episode number 196. Thanks for tuning in. So a little bit of history, stock market peaked in 1929 and then we spilled over into the Great Depression. Stocks bottomed a few years later in 1932, but they didn’t get back to the 1929 levels for 25 years, 1954. So question for you, how long did it take the average investor to break even after hitting its peak in 1929 and then bottoming in 1932? The answer is it took four and a half years. How did that happen? It was mainly from dividends. So what you need to know is in 1932, when stocks were bottoming, the average yield on dividends at the time was 14%. So factor in deflation, things were a lot cheaper during the depression and 14% dividends from your stock investments, it didn’t take long for you to recover, to recapture all of that money.

So another factor why it appears that it took 25 years to recover is by only looking at the nominal returns. The Dow Jones took IBM out of the Dow in the 1930s. IBM was the single best performing stock in the 1940s. So if they didn’t take it out, it wouldn’t have taken 25 years to get back to the nominal highs that we saw in 1929. Same thing, 1967, the Dow hit a thousand for the very first time, but it didn’t get through a thousand for good until 1982. That was 15 years that went by. Again, Dow Jones Industrial Average dropped some names they moved the goalpost, so it’s really inaccurate to measure the Dow Jones in 1967 versus the 1982 Dow. What you should measure though, is that the average total return from stocks was about 8% during that time period from ’67 to ’82. But almost half of that, three and a half percent of that, came from dividends, so you got about four and a half percent a year from the appreciation, the growth of your stocks, and three and a half percent came from the dividends.

Now move ahead into the decade of the eighties. Stocks returned about 15% a year, but understand again, dividends made up four to 5% of that return. If you didn’t include dividends, and a lot of people didn’t, you’d think that you were behind the rest of the group. Even today, you need to understand there’s a lot of people out there that just can’t count, or they really can’t do math. Don’t get misled, don’t get hung up on where the market stands. What really matters is your personal stock market, that is your account. Now, there are some that want to only own dividends, and that’s an error that we’re going to discuss in the next video. We’re going to get into reasons why that’s a mistake to just own dividend stocks. We’re looking forward to talking about that with you in episode 196. For now, understand that the number one reason why dividends are important is because you need to focus on total return. Don’t focus on just the nominal returns. That’s enough for 196. Thanks for tuning in.