What Happens in Bankruptcy 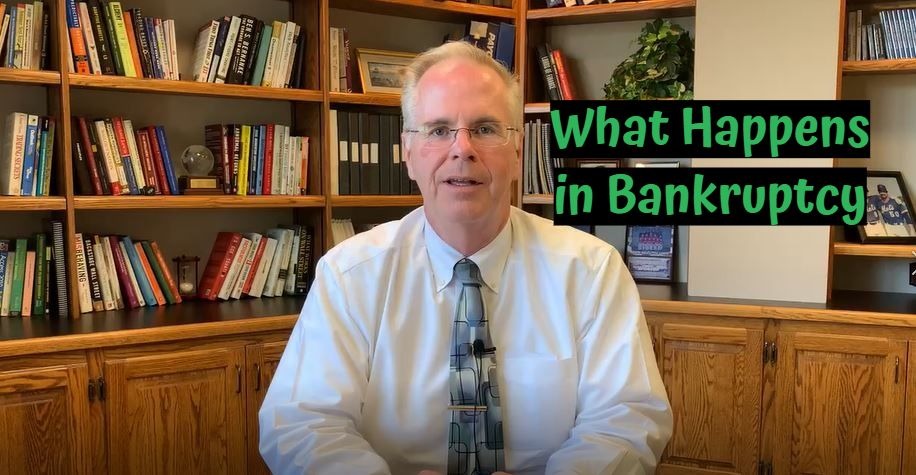 In Ep. 194 of the Mullooly Asset Show, Tom explains the different types of bankruptcy.  How come companies can be “in bankruptcy”, but still be operating normally?  What’s the difference between Chapter 7 and Chapter 11 bankruptcy?  Find out in this video!

What Happens in Bankruptcy – Transcript

Tom Mullooly: In episode 194, we take a quick trip through bankruptcy court, so you know what you’re talking about. Stick around.

Welcome to the Mullooly Asset Show. I’m your host, Tom Mullooly. And this is episode number 194. Thanks for tuning in. We hear often about businesses that are going bankrupt, but they stay open. How does that even happen? Investors need to understand, they need to know where they stand in line when a company is teetering on the verge of bankruptcy.

Now, technically bankruptcy is when your liabilities exceed your equity, you are unable to pay your debts. And so the way the whole process starts as you file a petition in federal bankruptcy court. There are three main types of bankruptcies. They’re called Chapters. The first one I’ll talk about is Chapter 13. This is primarily for individuals. It eliminates debts through an approved repayment plan. It’s usually over three, four or five years. Sometimes you’ll see lawyers late at night, advertising this on TV. These are for people who have income, but they’re overextended on their debts. In the old days, this used to be called a wage earner bankruptcy, and it allows them to work it out over three, four or five years.

The next one is called Chapter 11. This is a more well-known phrase, Chapter 11, bankruptcy. It’s actually a reorganization plan for businesses. It helps keep these businesses alive while they’re restructuring, and that’s often why you can see a business is in bankruptcy, but yet they continue to operate. Airlines are often in bankruptcy.

Then the third type is a Chapter 7 liquidation. This is really what you want to avoid, but it’s what most people think of when they hear bankruptcy. There’s no schedule to repay debts. Basically with Chapter 7 liquidation, you’re done. They liquidate all the assets, your creditors lineup to get what’s left. Pier 1, over the weekend, announced that they’re going into liquidation. That’s the end. They’re not coming back.

There is a fourth type of bankruptcy that I think is worth mentioning based on the news lately, and it’s called a Chapter 9 bankruptcy, or a municipal bankruptcy. This allows municipalities, towns, different structures to restructure, defer, discharge debts. It’s not available to states, despite what some people in Congress think. It’s available to municipalities. Orange County 25 years ago, went bankrupt. Detroit, just a few years ago filed a Chapter 9 municipal bankruptcy.

Sometimes you’re going to hear the phrase a pre-packaged bankruptcy, and what that is, it’s a Chapter 11 bankruptcy, but the company has contacted all of their creditors and said, “Look, we’re going to go into bankruptcy. We want you to agree to a restructured payment plan.” What this does is it speeds up the process. This whole bankruptcy process takes months, sometimes years, and they’ve got to get everyone to approve, to push this thing through.

So think about it, if you’re a lender to a business or a bondholder of a business, you are owed money by this company, everyone’s got to agree to take back less than what they were really entitled to. So this whole concept of where do you stand in line is really important. Where did the stockholders line up? They’re last. They’re not going to get anything back. Common stockholders, typically, their stock gets canceled. People don’t like hearing that, but that’s true.

Next up the line are preferred stockholders. Next up the line after that are bondholders. In many cases, especially for publicly traded stocks, the bondholders in bankruptcies become the new owners of the company. So the common stock gets canceled. The bondholders are usually offered a deal where they’ll say, “Hey, look, trade in your debt and we’ll give you shares in this new company.” Perfect example, about 15 years ago, Sears and Kmart, their stock was going to zero, everybody figured out that they were going bankrupt. So the stock wound up getting canceled. It used to be symbol KM, that was the stock for Kmart. The bondholders in Sears Kmart wound up getting shares, not in KM, but in SHLD, which was Sears holding company. It was an opportunity for Sears and Kmart to wipe the slate clean.

That’s what happens with a bankruptcy. It gives businesses and individuals an opportunity to have their life back and discharge some of these debts. It’s going to be hard to borrow money after you’ve gone through a bankruptcy, but it doesn’t have to kill you. And so understand that over the next few months, we’re going to see a lot of businesses filing for bankruptcy. It doesn’t mean that they’re going out of business. They may be operating under a Chapter 11 bankruptcy. It’s when you hear about Chapter 7 liquidation, that’s the magic word, liquidation, it’s all over for them.

That’s going to wrap up episode 194. Thanks again for tuning in.