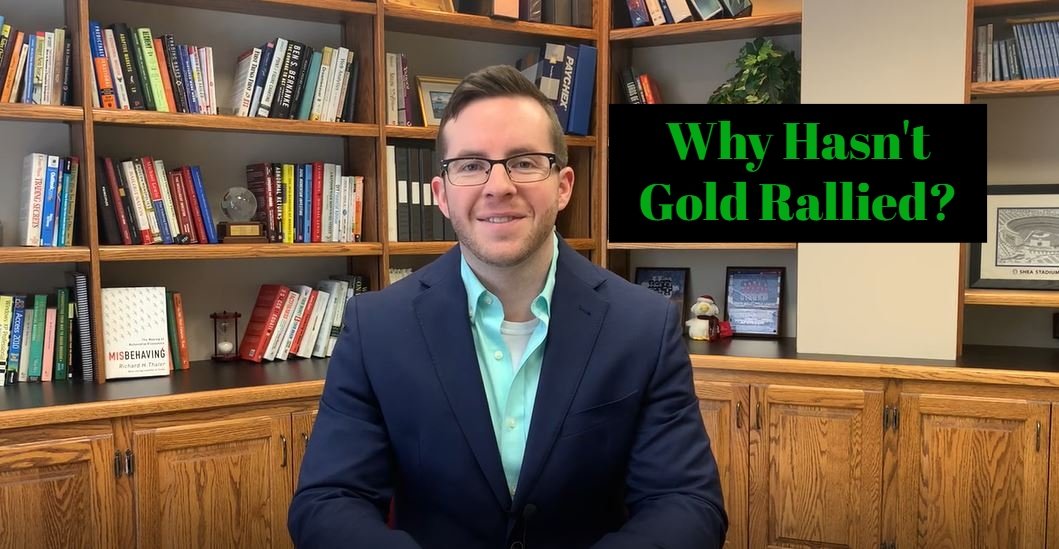 There are a few economic environments where gold “should” do well. Over the last 6 months, we’ve experienced ALL of them at once, and gold has done nothing. What’s going on? In this week’s video, Tim gives his take.

‘What Happened to Gold?’ – Michael Batnick – The Irrelevant Investor

Tim Mullooly: In episode 235, we’re going to talk about gold.

Welcome to the Mullooly Asset Show, I’m your host for today, Tim Mullooly, and this is episode number 235. Thanks for tuning in.

A recent article from Michael Batnick of Ritholtz Wealth Management got us thinking about gold and what it’s been doing lately. If we could create a “perfect scenario” for gold to rally, it would be an environment where we saw a few things. A falling dollar, rising inflation expectations, money printing, central banks increasing their balance sheet, fiscal deficits increasing as well and political turmoil.

Now gold is again “supposed to do well in any of those situations.” And over the last few months all of these scenarios have actually been in play at the same time, but gold hasn’t done anything. Gold is actually down 9% over the last six months, and it’s 15% below its recent highs back in August. So what’s happening? Why isn’t gold doing what it’s supposed to be doing?

Michael has a few theories of his own and I’ll link to those in the show notes so you can read the full article. But the main one that I tend to agree with is that these stories that we’ve attached to gold are just that, they’re stories.

Brendan has said on a number of podcasts before that gold isn’t correlated to anything, and it’s going to do whatever it wants whenever it wants. It’s a pretty unreliable asset if you’re banking on it reacting a certain way to certain news all of the time. But if you’re looking for something that moves with no real rhyme or reason then you may be in luck, gold may be for you. But to bank on gold always reacting a certain way to certain news is just not going to happen.

This kind of goes back to what we say about any investment. People are constantly trying to attach the reason why the stock market is up today, or why stocks are down, or why a certain sector asset class or individual stock or fund is doing what it’s doing. Some assets do have a higher probability of reacting in certain ways to certain situations, but it’s never 100% of the time. That’s just the name of the game when it comes to risk, and there’s always going to be risk involved to a certain degree with any investment that you have. And as we’ve seen, as Michael laid out in his article, gold is no different.

So that’s just a quick reminder of that here in episode 235, just wanted to give you a quick update on what gold is doing and why it might not be reacting the way that certain people think that it should be.

That’s going to wrap up this episode of the Mullooly Asset Show. Thanks for tuning in, we’ll see you next time.