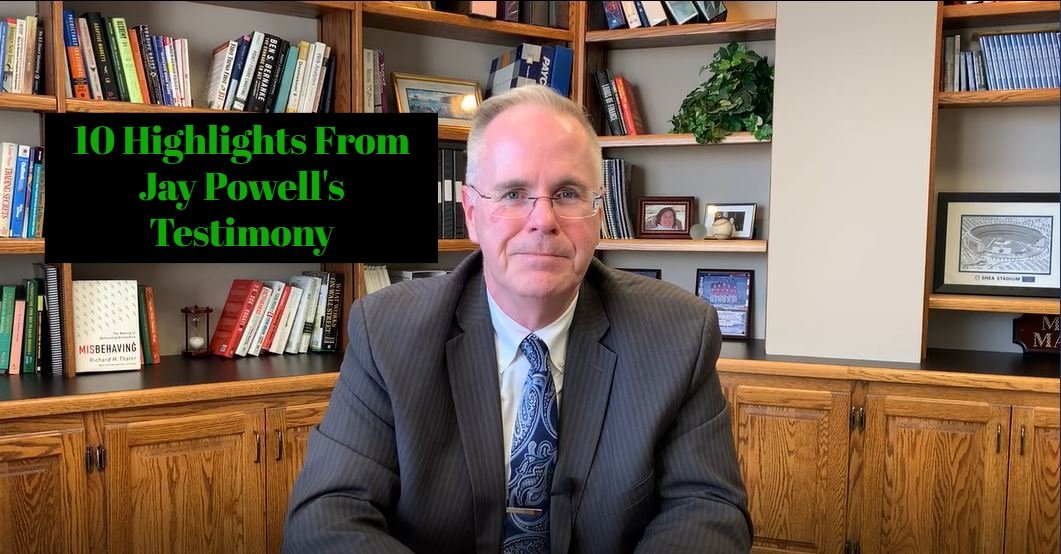 Over the last two days, the Chairman of the Federal Reserve Jay Powell gave a testimony in front of Congress about the state of the economy. He discussed worries about inflation and other factors concerning Americans at the moment.

In this week’s video, Tom gives 10 brief highlights from his testimony with things YOU need to know.

Tom Mullooly: In episode 234, we cover the highlights from Jay Powell’s testimony before Congress. Also, answer that question, why is the market up?

Welcome to the Mullooly Asset Show. I’m your host, Tom Mullooly, and this is episode number 234. Thanks for tuning in. The chairman of the Federal Reserve, Jay Powell, gave his testimony the last two days before Congress and people are asking, why is the market up so much? The market’s been down five or six days until today. At the present time, the market’s up about 400 something points, looks pretty good.

The first point that you need to remember or take away from this is that he said that the Federal Reserve will provide full support for as long as it takes until the economy is back on track. Now, stop and think about this for a second. When the Euro was falling apart, Mario Draghi said this about 10 years ago that they would do whatever it takes in the EU to support the Euro and to support the EU. The markets took off on a tear.

Fed chairman, Jay Powell, pretty much just said the same thing, that the Fed will provide support for as long as it takes until the market gets back on track. That’s a huge confidence booster.

The second thing he said was full employment, the way that we’re used to looking at it, it’s very hard to measure. They need, more than anything, they need the participation rate to go up. Right now, it’s in the low 60s, meaning only 60% of the eligible or possible workforce is actually out there working.

Number three, the Fed is not overly concerned about overdosing on fiscal stimulus for now. These folks who keep saying that we’re printing money too fast and we’re going to have runaway inflation, everybody just take a chill pill. They’ve got this thing under control. They’re doing their job and they do it pretty well.

Number five, in terms of the highlights that we took away from his testimony, is that inequality undermines the overall growth rate in the economy. For example, just having lousy childcare policies, it’s starting to work against us and hindering people from coming back to work.

He also went on to say, number seven, that an overshoot in inflation is necessary right now. It’s necessary to compensate for the years of disinflation that they’ve seen in the system. Remember, for the last 10 years, they’ve been aiming for a target of 2% inflation, 2% growth in the economy, they haven’t been getting that. They need to overshoot their goals right now to kind of catch up.

Number eight, rising labor costs. Now, when I was in school, I learned in economics that rising labor costs will show up immediately in inflation and wage pressures. He said, “That’s not actually how it works anymore.” Rising labor costs are not necessarily going to lead to immediate inflation. That’s okay. There’s a lot of discussion about this $15 an hour minimum wage. I think we’re going to be all right, politics aside.

Number nine. There’s not a lot of talk about asset bubbles, and so folks who are worried about the stock market being in a bubble or NASDAQ being in a bubble or, who knows, Bitcoin, all of these topics, everybody just relax. They don’t see anything yet. They’re going to be the first ones to control it, which leads to point number 10.

Powell said a sustained rise in inflation is much, much easier to derail than disinflation. Think about that. For the last 10 years, they’ve been trying to create demand in the economy. They’ve been targeting 2% growth, a 2% inflation rate and they haven’t been getting it. Why? It’s very, very hard to create demand. When they do get demand and they do get a spike in inflation, it’s going to be very easy to just cut that out by starting to raise rates. They can snuff out that flame pretty quickly. It’s the disinflation, it’s creating demand. That’s very, very hard to do.

A lot of folks want to know why the market’s up, there’s your answer right there. There’s 10 of them. Some of them are excellent. The main takeaway, I think, is number one, the Fed is going to provide support for as long as it takes. Don’t forget it.

That’s the message for episode 234. See you in the next one.