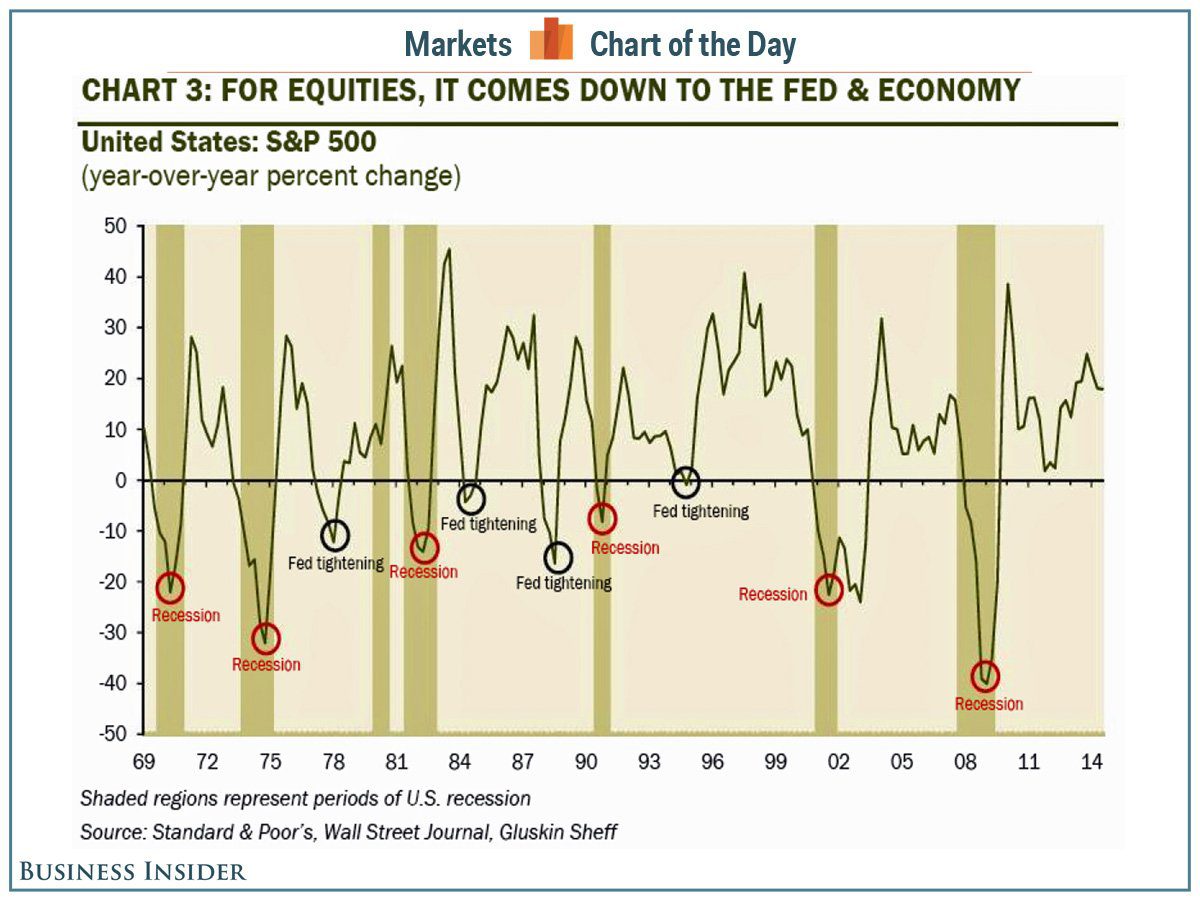 With the volatility we’ve seen this October, Tom and Brendan took the opportunity to examine two underlying causes of bear markets. We experienced a near 10% peak to trough correction in the S&p 500 this month, but it’s looking like we’re going to finish the month essentially flat. Volatility causes people to worry though. So what causes bear markets to occur? When are we dealing with a routine pullback or correction and when is it something greater? Nothing is absolutely foolproof, but since the 1960’s two conditions have been seen in bear markets. That doesn’t mean it’s impossible for a bear market to exist without the conditions, but it’s pretty unlikely according to the data.

“For stocks, it always comes down to the Fed and the economy. The reality is that bear markets do not just pop out of the air. They are caused by tight money, recessions, or both.”

You can see in the following chart what Rosenberg means.

One thing that’s important to stress is that when we do see tight monetary policy, recession, or both market drops can be severe. In the chart above you can see that the S&P 500 has typically fallen 40%+ peak to trough during bear markets. The peak and trough don’t necessarily have to occur in the same year either. Look at 2008’s recession for example. The peak occurred in October of 2007 when the S&P 500 saw 1576. 1475 was the starting point for 2008, but the trough didn’t occur until 666 during March of 2009. We’re talking about big moves in the stock market here.

Using Rosenberg’s assertion that bear markets don’t just happen and are caused by tight money, recession, or both; let’s assess where we’re at right now. Are we experiencing tight monetary policy? Hardly. While the Fed announced the end of quantitative easing today, they’ve given no indication that they’ll be tightening anytime in the “foreseeable future”. Are we experiencing a recession or seeing signs of one in the economy? Not at all. While economic growth hasn’t been robust, it’s still been growth. Like we mentioned earlier, just because we haven’t seen these two conditions doesn’t mean it’s impossible for a bear market to happen. Anything is possible, but we tend to agree with Rosenberg on this one.