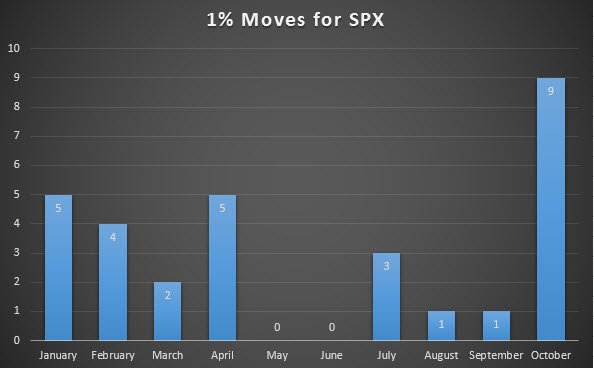 To say that October 2014 has been volatile so far would be an understatement. This month has awoken dormant nervousness inside many investors. Relatively speaking, October has been much more volatile than any other month of 2014 so far. Ryan Detrick recently shared a great illustration of October’s increased volatility on StockTwits.

Today is October 21, 2014 and we’re likely to see our 9th 1% move (up or down) in the S&P 500 this month. Compared to the rest of the year, that looks like an outlier. Ryan’s data might put things into perspective for you. When we experience a year like 2013, sometimes we forget that volatility exists. This can make the reemergence of any volatility feel even more uncomfortable than it should. October has certainly shown us increased volatility so far. We’ll see what the rest of it has in store.