The Truth About Owning Annuities 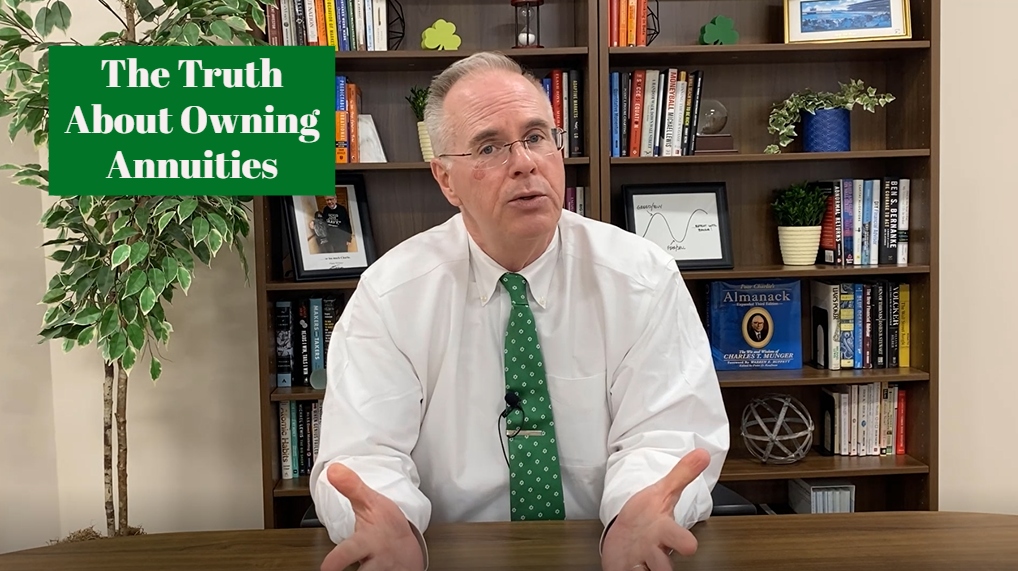 When the stock market is volatile, sales of annuities tend to skyrocket! Folks are tempted by the downside protection, but there are usually misleading strings attached.

In this week’s video, Tom breaks down what those strings are and why the annuity pitch sounds so enticing. Don’t fall into the “too-good-to-be-true” trap of annuities.

Annuities are complicated investment products. Tune in to find out what you can ACTUALLY expect.

Don’t bother looking, it will find you – Josh Brown – The Reformed Broker

8 Tips to Stay Invested During Down Markets – Mullooly Asset Show

**Click here for a downloadable PDF version of this transcript**

Tom Mullooly: Do you want the upside of the stock market without any downside? Stick around. We’re going to talk about it in episode 284.

Tom Mullooly: Welcome to the Mullooly asset show. I’m your host for today, Tom Mullooly. And this is episode number 284. Thanks for tuning in. So do you want the upside of the stock market without any of the downside? Have you heard this before? Have you heard it on a radio or TV ad or maybe you’ve seen it in print some kind of marketing piece?

When markets are volatile, like they’ve been in the first quarter of this year in 2022, annuity sales just rip higher. Why is that? Well, because it’s a very appealing pitch that these annuities, that they sound great. You’re going to capture the upside of the stock market without any of the downside.

The problem is that’s not entirely accurate. See, getting all of the upside without participating in the downside, it just really doesn’t exist. But it sounds so good when you hear this kind of pitch, especially when you’re looking at a statement that’s down for the past quarter or the past year or whatever.

Tom Mullooly: There was a survey done recently by the Insured Retirement Institute. I’ll share some of these results with you. 45% of the people who were surveyed said that they would consider purchasing an annuity or adding an annuity to their investments at some point in the future. And the people that they surveyed were all within five years of retirements.

And so the idea that, hey, I want to retire, but I can’t stand having this volatile part of my investments swinging around in the stock market. I can’t take that. So in the very same survey, 87%, seven out of eight people said they would buy an annuity when it was described by its features.

Not that they knew that they were getting an annuity. Hey, if you could get the upside of the stock market without the downside, would you do something like that? So the most appealing feature is that promise of downside protection while still participating in the upside.

Tom Mullooly: But it comes with some strings and you really need to know this. The upside that they all pitch, well, it’s capped. You’re not going to get all of the upside. In some cases, you don’t even get half of the upside.

The participation rate is also capped. So if the NASDAQ is the index that your annuity is tied to, if that goes up 45%, you’re not getting 45%. You’re getting a fraction of that. The annual cost of these products, because that’s what they are, is about one to 2% per year. So that’s going to be a drain on your return as well.

I’ll also tell you that the salesperson will in most cases make more than you’ll make in the very first year in these things. And if you want to get out of them, good luck because the surrender period on these investments is usually 8, 9, 10 years. So it’s going to cost you some money to get out of these things.

Tom Mullooly: Annuities do fit into plans for clients. The best place that we found them is to be as an income replacement. This is a very good use of annuities as a kind of like a pension substitute.

That is if you’re ready to start taking distributions from your investments. If you’re still looking to compound and grow the money, this is probably not the way to do it. So there are many places where annuities can be suitable. There are good spots for these things in client financial plans, but many, many, many times these products have been oversold, inappropriate.

Tom Mullooly: And there’s a lot of problems. We wind up doing the translation for a lot of folks that come into our office with these things. We didn’t even sell it to them. We don’t sell it because we’re fee only investment advisors. It’s kind of what we do. Be very careful when you’re considering an annuity. It might be suitable for you. That’s going to be the message for 284. Thanks again for tuning in. See you next time.