What Does it Mean When the Fed Raises Interest Rates? 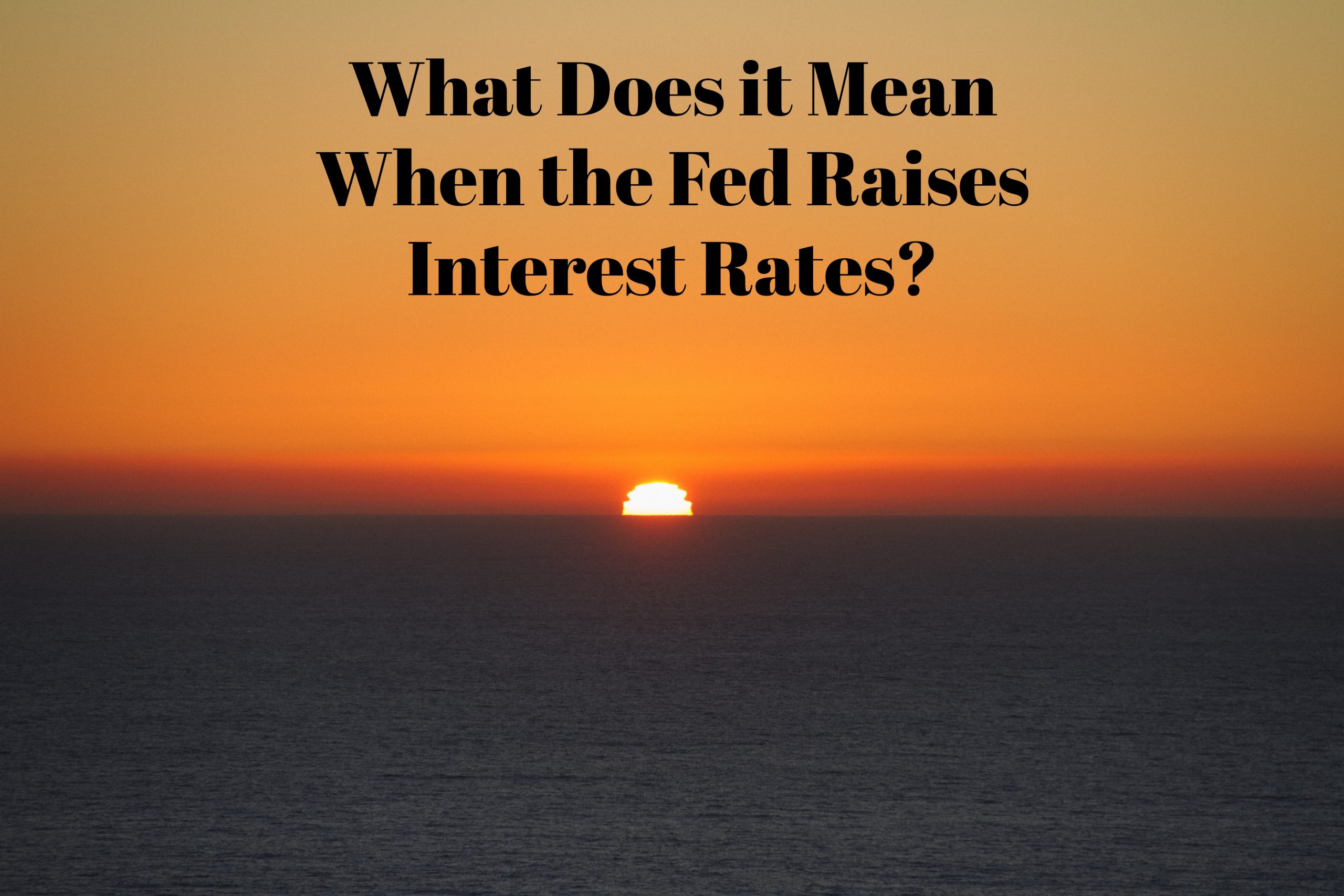 But is that a good thing? A bad thing? Or somewhere in-between? And how does it affect your personal financial plan?

What Does it Mean When the Fed Raises Interest Rates?

To start answering this question we need to understand some industry lingo.

There are three big things the Fed is trying to accomplish with monetary policy.

Maximum employment means they want everyone who wants a job to be able to find one.

Stable prices means they want the cost of goods and services to remain relatively stable, or within expectations. This is where inflation comes in to play. More on that later.

Basically the Federal Reserve is in charge of keeping all of our countries’ financial institutions (banks) up and running as smoothly as possible.

So when you see a news headline that says “The Fed is Raising Interest Rates” what they are referring to is the federal funds rate. The federal funds rate is the interest rate that banks pay to borrow reserve balances overnight. Basically, banks have to keep a certain amount of money in their “reserves” to meet their obligations. And the Fed sets the rate at which they, and other banks, can charge to “hold their reserves”. Banks, banks, banks. I know, it’s complicated but stick with me.

The fed funds rate dictates how easy, or not easy, it is for banks to borrow and lend money to each other, and therefore consumers.

When the Fed raises interest rates, it makes borrowing and lending more expensive for banks. Which they then turn and pass on to consumers. Consumers are households (us), but also businesses.

When the banks are done banking, us non-banks (read people) feel rising interest rates in money market accounts, online savings accounts or any other interest bearing account. Although, it may take time for the rate to change.

We’ve gotten asked a lot over the last two years: “I’m earning nothing at the bank, what can I do with my money to earn a couple percent?”. And there hasn’t been a good answer, without taking some, usually unwanted, risk. But now you might actually see some cash flow from these interest bearing accounts in the near future.

Higher rates are also felt if you have an adjustable rate loan. These are typically seen in the housing market, referred to as ARM’s (adjustable rate mortgage), and in the personal loan space.

Also, if you are looking to buy a home, standard fixed rate mortgages are influenced by rising rates as well.

Not only does borrowing money become more expensive for consumers, but also for companies. This is why the stock market is influenced by interest rates.

The narrative goes something like this: higher borrowing expenses could mean businesses are less profitable, which could mean the stock price goes down. **COULD MEAN**

Again, that is just the theory. Could mean is different than must mean.

Rising interest rates also affect the bond market. Which we address in this week’s podcast episode. But these are the main areas where interest rate increases are seen and felt across financial plans. Rising rates aren’t necessarily a good thing, or a bad thing, they are simply a feature of the economic landscape we live in.

Rates are expected to go up even further in the coming months. Whether that actually happens, and by how much, is anybody’s best guess.

One concern that has often come up in the last couple of months is inflation eating away at purchasing power. This is a very real concern. Which we’ve addressed here and here.

On a personal level, the answer to “what should we do about inflation?” is hard to pin down. Financial news sources try to answer this question and come off as sounding tone deaf. There was something over the weekend that suggested taking public transportation more and eating lentils instead of meat. If you’re willing to make those changes, great.

Inflation affects everyone differently. And there isn’t a blanket “fix” to this problem. But it does drive home the importance of trying to live below your means. Get your cash flow in order. Spend less than you make. But how you go about doing that is up to you.

This is also the “answer” to living a financially healthy life even when inflation isn’t running rampant. Inflation just exacerbates it.

One thing that will remain true about curbing inflation on a personal level is that you have to invest in the stock market. With inflation around 8% now, it is important to keep a portion of your money invested in stocks so you at least have the possibility of keeping up. If you aren’t invested, or pull your money out of the market, you have no shot at keeping up with inflation. Plain and simple.

When prices are going up, the best way to keep up is to own shares of the companies that are raising prices.

The economy and the stock market are complicated systems, where conditions are finely balanced and controlled. One thing affects another thing. And then another. Worrying about the whole system can be overwhelming.

When things seem too complicated and overwhelming, it usually means it’s time to simplify. Get granular. Bring things back to a personal level. Control what you can control. And do your best to tune out the noise and focus on what really matters.