8 Tips to Stay Invested During Down Markets 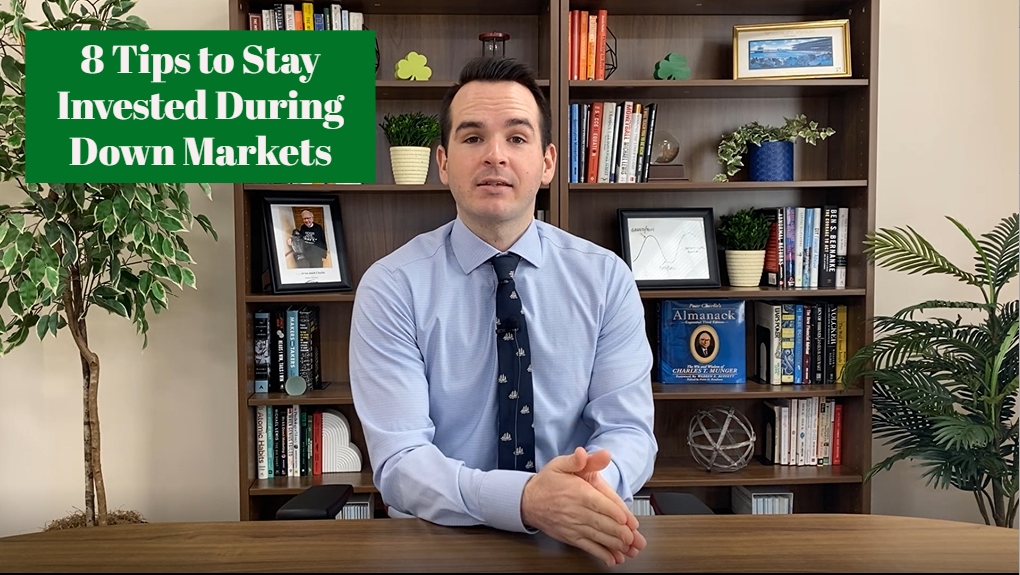 These are meant to keep you thinking long-term and to help you stick to your investing process when doubt might be creeping in.

#1 – One Stat Why Panic Selling Can Be Silly – Callie Cox

#7 – There is no hedge for everything – Ben Carlson

8 Tips to Stay Invested During Down Markets – Full Transcript

**Click here for a full downloadable version of this transcript**

Casey Mullooly: In episode 283, we cover eight tips for staying invested during down markets. Keep watching.

Casey Mullooly: Welcome back to the Mullooly Asset Show. I’m your host Casey Mullooly, back with you for episode 283. And we’ve got a good one for you this week. We’re going to talk about eight tips or eight statistics, really, for staying invested in down markets.

These are meant to keep you thinking long term and keep them in your back pocket if you’re having doubts about your investing process, and hopefully these will keep you on track. We’re going to link up to all of these, where I found all these statistics in the show notes. So don’t worry about that.

Be sure to go check them out. Number one is from Callie Cox and that is that the S&P 500 has fallen 2%. It’s fallen 2% or more, 408 times. In 68% of those instances it’s also gained 2% in a single day, within at least two weeks. So the best and the worst days in the market usually happen pretty close together, which ties in nicely with number two.

Casey Mullooly: So big differences, again, the best and the worst days tend to happen very close to each other. So just staying invested is usually the only way that you’re going to nail a bottom, is if you stay invested. So, number three, this is from Ryan Dietrich and he looked at the annual average drawdown in midterm election years, which is 17%.

Right now, depending on where you look, we’re down between 10 and 15%. So down 17%, very normal, should be expected and doesn’t mean that anything is wrong. Number four, from Carl Quintanilla, he tweeted a chart that looked at the percent probability of the S&P 500, having a negative return over one day, one month, one quarter, one year, three years, five years and 10 years.

So, the probability that the S&P 500 is going to have a negative return on one day, 46%, basically a coin flip, no one really knows. Over one month, 38%, still not great. Over one year, that percent of a negative probability goes down to 25%.

Time is your best friend when investing, that’s just a fact. Number five, not a statistic, but if you’re a younger investor in your accumulation phase, meaning you’re putting money into your retirement accounts, the market falling is literally the best thing that can happen. You’re buying shares with the market at lower prices, which is going to help your performance over the long term.

Number six, if you’re in the de-cumulation phase or the withdrawal phase of your investing journey, you likely should have some money in cash or bonds, which means it’s not at risk in the market. That’s money that you’re spending that should be taking no risk at all, which opens you up to view the stock side or the growth side of your portfolio with those longer time horizons that we talked about. One, three, five, 10 years.

Casey Mullooly: Number seven, this was from Ben Carlson that looked at again the S&P500. The average entry year drawdown is between 13, 14% overall. But in the years that the market is down, the average return of bonds is 5%. So, that speaks to the importance of diversification.

Don’t put all your eggs in one basket, don’t take too much risk. That’s one of the biggest reasons why we see folks panic sell, it’s because they’re taking too much risk. If you get that right off the bat, then you can just trust that your allocation is what’s best for you and you won’t need to do anything.

If you have the long enough time horizon, we feel pretty confident, we feel very confident, that the market is going to do its thing and be of benefit to you. So eight tips for you there. I know this was a long-winded episode. Like I said, we’re going to link to all these statistics, keep these in your back pocket, and we’ll be back with you for episode 284.