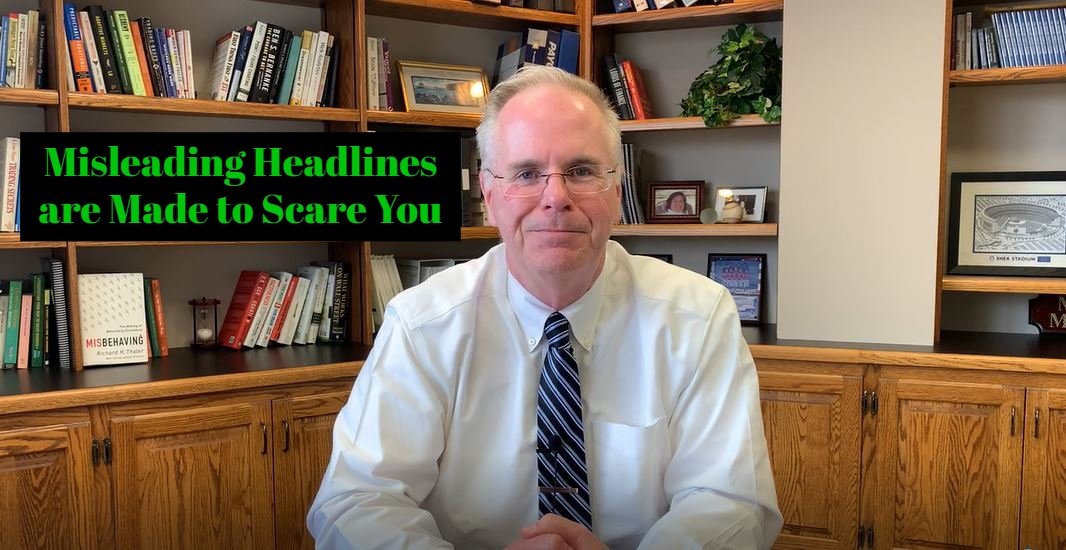 The media writes headlines that are made to get your attention. In our latest episode, Tom gives two examples of how a headline can give readers the wrong impression. Don’t let a headline scare you into doing the wrong thing!

Misleading Headlines are Made to Scare You – Transcript

Tom Mullooly: In episode 233, we talk about terrifying people with misleading headlines. Welcome to the Mullooly Asset Show. I’m your host, Tom Mullooly, and this is episode number 233. Thanks for tuning in.

Misleading headlines from market experts and the media are designed to terrify folks. Don’t let this happen to you. I’m going to give you two examples in this video. Today, we’re recording this in February of 2021. In CBS MarketWatch, the headline was 80% of older Americans can’t afford to retire. That sounds really bad, doesn’t it? I think it does. 80% of older Americans can’t afford to retire. What they left out was the part that says at their current level of consumption.

So let’s read the entire headline. 80% of older Americans can’t afford to retire at their current level of consumption. Now, I just want you to think about this. When you’re retired, hopefully, you won’t have a mortgage. Now, as you’re watching this video, think about how much you pay each month in a mortgage payment, your principal plus your interest. Think about that coming out of your budget. You don’t need to do that anymore.

When you’re retired, hopefully, you won’t have or want to have too many car payments. Think about that 500 or $600 coming out of your monthly budget, and hopefully you better not have student loans. Although, some people are helping family members in their retirement by paying student loans. So sounds terrifying, but they forgot to tell you the whole story. What a shock.

The second example that I want to use is what everybody is referring to in the media and the market today as the student loan crisis. Now, it may be a crisis for you or for a family member. It kind of reminds me when I see people talking about the student loan crisis what Ronald Reagan used to say about recessions. He said, “A recession is when your neighbor loses their job. A depression is when you lose your job.”

According to LendingTree, Americans borrow an average of $34,635 for new automobiles, almost the exact same amount of student loans. So to be fair, not having money for retirement and carrying student loans, these are problems. Having things like student loans can really hamstring someone’s progress in their financial life.

The next thing, buy a car, buying a home, starting a family, these are real issues. If you know someone who’s in a situation like that, you should speak with a financial planner or get some help when it comes to that. But the markets and the media, especially, always need something to worry about.

Thanks for watching episode 233. Catch up with you in the next episode.