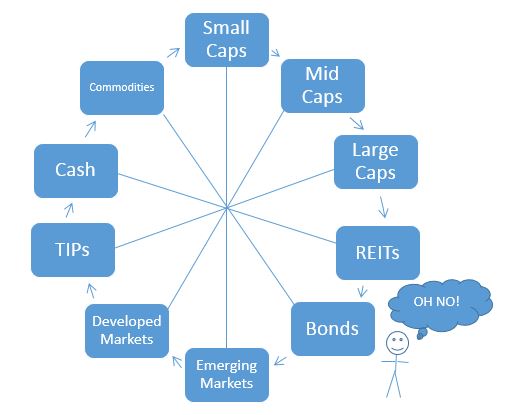 Game of Thrones is one of the most popular shows on TV. I was a little late to the game, but hopped on the bandwagon in 2016 and haven’t looked back. One of my favorite moments from the show was an exchange between Daenerys Targaryen and Tyrion Lannister. Daenerys describes the ruling families of Westeros by comparing them to a wheel:

“Lannister, Targaryen, Baratheon, Stark, Tyrell they’re all just spokes on a wheel. This ones on top, then that ones on top and on and on it spins crushing those on the ground.”

She goes on to say that she wants to break the wheel.

Investors should take note of this and break their own wheel, rather than be crushed by it. (Excuse my poor artwork)

Just like the various houses on Game of Thrones, asset classes are just spokes on a wheel. They will come into and out of favor, often in swift and dramatic ways. The performance chasers get crushed on the ground.

It’s really tough to determine which asset classes will outperform ahead of time with any consistency. In fact, I’m willing to guess that by the time the average investor realizes an asset class has been outperforming, mean reversion should be more of a concern than FOMO. Sadly, performance chasing is something of a ritual among investment amateurs and professionals alike. Watching investors realize something is outperforming is like watching five year olds play soccer: they swarm around the ball where ever it goes.

To further visualize how difficult identifying outperformance ahead of time can be, check out this asset class performance quilt from Ben Carlson of Ritholtz Wealth Management.

My drawing of the investor getting crushed by the wheel is simply a re-imagined version of this quilt.

So how can investors break the wheel? Diversification.

The problem is that diversification always looks stupid in hindsight. That stupidity can be magnified on a year to year basis, as the pseudonymous “Jake” pointed out today on Twitter:

Viewed in hindsight, diversification is nothing but a sunk cost, like insurance. It always would’ve been better to only own the top asset class, just as it always would’ve been better to not pay for insurance you don’t use. The problem is we can’t know what the top asset class will be ahead of time, just as we can’t know when we’ll need insurance before we do. As Corey Hoffstein of Newfound Research wrote:

“Viewed with the benefit of hindsight, diversification will always disappoint. To judge the outcome of diversification after the fog of uncertainty has lifted, however, misses the point: diversification provides us the incredibly important ability to admit we don’t know.”

So don’t get too bogged down by which spoke of the asset class wheel has recently been on top. The more important thing to do is make sure you don’t end up performance chasing yourself into oblivion. Diversify and break the wheel!