63% of Investors Reported Making This Mistake 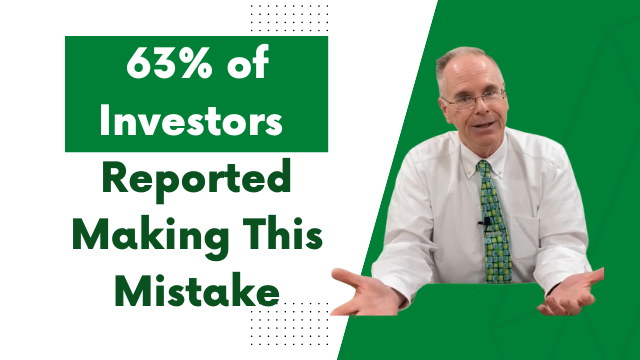 How are investors supposed to avoid making financial decisions based on emotion? And if you are not supposed to invest based on how you feel, what are you supposed to base your decisions on?

Tom covers this and more in this week’s video. He shares research that shows how many folks make emotional financial decisions and what they should do instead.

If you find yourself regretting recent decisions in this volatile market environment, tune in to this video!

What Does a $1 million Retirement Look Like – Mullooly Asset Show

But even with these emotional decisions decreasing as folks were getting older, we want to point out 53% of the people surveyed in their ’60s and 46% of people in their ’70s were reporting that they still made emotional financial decisions and they’re still carrying regret about doing this. That’s a lot of people. I mean, that’s basically half of the respondents saying that they are still making financial decisions based on emotions and they’re expressing some regret about it. So, look, we’re recording this at the beginning of 2023, there’s lots of volatility going on in markets right now.

And we also know in the beginning of the year, people like to review their statements and they like to review what’s happened over the past year. Don’t get sucked into doing something emotional when it comes to your investments. What’s a better way to do this is to remember your long-term plans when you’re looking at things that might be a little upsetting to you, that’s completely okay.

It’s going to be a bumpy road, getting to where you want to go, it’s not going to be smooth sailing. And we’re going to have years like 2022 and periods where the market doesn’t always cooperate with what you want. We’ve learned over the years, for example, if we were to take a poll of clients in January of ’22, most clients would report or investors would report that they were overconfident about how things were going to go in the future. That’s because the previous two years were pretty good.

However, if we were to run the same poll today in January of ’23, we’re going to find that most respondents, they want to be risk averse and they’re underconfident. It’s a better way to say it. So, a lot of stuff comes down to your recent history. Sometimes they call it recency bias. It’s important to keep that stuff in mind that making decisions, especially investment decisions and financial decisions based on emotion, often doesn’t work out in your favor.

That’s the message for today’s video. Thanks again for watching. If you haven’t subscribed already, just click that subscribe button below. Thanks again.