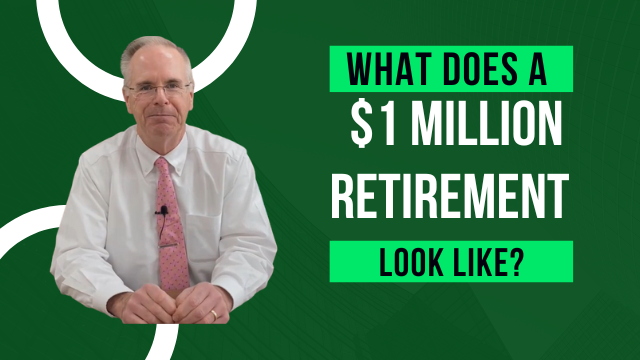 In this video, Tom covers what a $1 million retirement might look like. $1 million seems like a lot of money to most people, but is it even enough to maintain your lifestyle in retirement?

Tom discusses 4 things folks should do to make sure their $1 million allows them to live the life they want in retirement.

If you have $1 million saved for retirement, tune in to find out what to expect!

How are Millionaires Feeling About Retirement – Mullooly Asset Podcast

What Does a $1 Million Retirement Look Like? – Full Transcript

Tom Mullooly: We’re going to talk a little bit about what a million dollars in retirement looks like. So stick around.

So, a couple of takeaways from this great article in The Wall Street Journal, and we’ll link to it down below in the show notes. So, takeaway number one, most folks who reported they were okay in retirement had no debt and they may have had little or no mortgage. That’s getting those big monthly expenses out of the way is a very, very big deal.

Take away number two, most of the folks who reported they felt comfortable in retirement had pretty low expenses on a monthly basis. Now, look, everybody wants to put their best foot forward when they’re being interviewed for an article that’s going into a newspaper. But even still, the folks who seem to be okay had pretty low overhead on a monthly basis. They just didn’t spend a lot.

So, take away number three, you might be healthy now, but there was a pretty good example of a married couple who fell into poor health, both of them wound up getting sick. You may be in good shape right now, but things happen. You have to really be prepared because healthcare expenses in retirement can be a big drain on your financial assets.

If you retire at 65, you could live for 35 more years. And the odds of that go up if you’re talking about two lives, meaning a married couple. One of you is probably going to make it into your late 90s or even approach 100 in the future. So you really have to be prepared.

The amount you have, I’m sorry, the amount you’ll need to have saved goes up even higher if you want to retire before age 65. So, you’ve got to really think about that. In our experience, people who were good savers, they really don’t change in retirement. They just don’t seem to spend a lot of money, they don’t live extravagant lives.

The opposite, unfortunately, the opposite is also true, people who were not good savers while they were during their working years, they tend to spend more than expected and sometimes, they run into problems in retirement or they kind of have a religious experience in the sense that it’s like, “Okay, we got to really tighten our belts and buckle down.”

So, it’s important to understand that your retirement could last a very, very, very long time. I don’t know if I’ve made that point clear. It could be a very long time and you need to be prepared for it. Talk with your financial advisor about whether you’re on track or not. It’ll be time well spent. That’s the message for today, thanks again for tuning in.