The Rashomon Effect: What To Do With Narratives 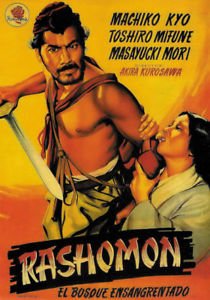 There are two sides to every story. Or, when it comes to the 1950 film, Rashomon, four sides.

After its surprise Golden Lion victory at the 1951 Venice Film Festival, Rashomon took the world by storm. The small Japanese film was created by the now-revered director and screenwriter, Akira Kurosawa.

Rashomon is a mystery about the unsolved murder of a samurai. During the film, we see four eye-witness accounts of the crime. The reason Rashomon was such a hit is because all four accounts tell conflicting versions of what occurred.

Each account seems accurate based upon how its narrator perceived the incident. However, it’s clear that the eye-witnesses are presenting themselves favorably, rendering their stories equally unreliable.

At the time, Kurosawa’s blatant disregard for the literary convention of a single, reliable narrator was groundbreaking. Adding to its already innovative style, the film ends without closure. The mystery is never solved. This drove audiences wild.

Fast forward to today, and Rashomon’s format has been adapted by countless TV shows and movies. The film has even surpassed its own cinematic acclaim. Since Rashomon burst onto the scene, when differing narratives describe the same event, the film’s title is often invoked as an expression of the phenomenon itself. The “Rashomon Effect” appears in law, psychology, and philosophy.

It is not uncommon to hear differing narratives attempt to explain daily market moves. And as we’ve learned lately, the more volatile the environment, the higher the volume of opinions.

Don’t believe me? These headlines appeared a week apart:

It’s like our own little version of Rashomon. Every explanation for a market movement can seem plausible based upon somebody’s perception of it. But are any of them true?

When we can’t figure out who killed the samurai, it’s entertaining. When we can’t understand the swings in our retirement account balance, not so much.

The truth is that there aren’t definitive explanations for why the stock market does what it does. There never will be. However, human nature doesn’t seem to be compatible with this fact. As long as the human desire for certitude exists, so will the narratives. They scratch an itch, and that certainly has value.

There’s no harm in consuming market narratives as long as we remember that most of them fall into the category of interesting, but not actionable.