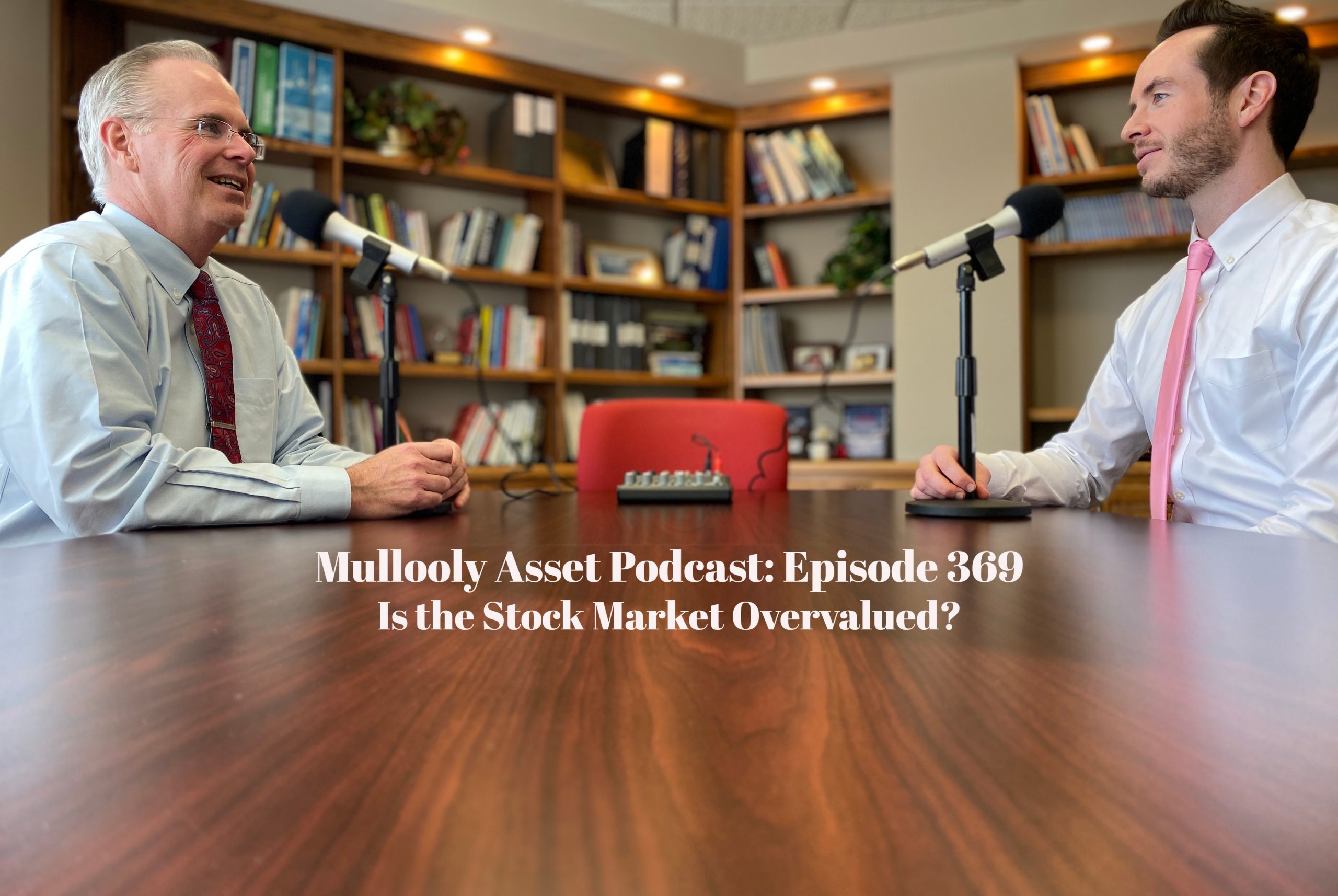 In this week’s episode, the guys discuss a popular stock market valuation metric, the forward price to earnings ratio.

We first explain what the ratio is, what it measures, and how it’s used. On a high level, it tells us how a company, or in this case the S&P 500 index, is valued.

Interestingly enough, the forward P/E ratio for the S&P 500 has decreased as the index itself has continued to increase.

The guys break it all down in this informative podcast episode, you don’t want to miss this one!

Casey Mullooly: Welcome back to the Mullooly Asset podcast. This is your host, Casey Mullooly, and this is episode 369. We’ve got the all-star crew here with us this week, with Brendan and Tom and yours truly, of course. We’re going to dive into all things P/E ratio. That is the price-to-earnings ratio.

We’re going to explain the ins and outs of this widely used valuation metric. We often see it touted as some sort of timing indicator in our industry with people claiming, “The market’s overvalued. It can’t keep going up from here. Look how high the P/E ratio is.” We’re going to break it all down for you in this episode. So, without further ado, episode 369 of the Mullooly Asset podcast.

Tom Mullooly: So we’ve got some moving parts in this. So the first thing is for those that don’t know what that is, a P/E ratio is price-to -earnings ratio. So you take the price of the S&P 500, which is now around 4400 and you divide it by the earnings of the 500 companies in the S&P…

I forget the number that they’re using now, but if you just use $240 a share, that’s… You just do the math on that, you come up with a ratio. And that’s where he says…right, a year ago, the ratio was 23.6 and now it’s about 21. Still, a little high, but it is something that people look at a lot, historically.

Casey Mullooly: Yeah. This is been, especially over the last couple of years, it’s… People point to it and be like, “Oh, the market’s overvalued, the market’s too high. It’s got a… The market’s got a tank.” So this corrects.

Casey Mullooly: But we’ve seen it correct without-

Brendan Mullooly: There’s a numerator and a denominator.

Tom Mullooly: People forget that there is two parts to that, yeah.

Brendan Mullooly: So they’re baking in forward expected earnings into this, in the denominator.

Tom Mullooly: Yeah. Just hit the pause button right there, forward, expected. So we’re looking ahead to what-

Brendan Mullooly: [crosstalk 00:03:17] and telling us what they project, the next year’s worth of earnings will look like.

Tom Mullooly: Not what they actually did, and it’s what they think they’re going to do in the next 12 months-

Brendan Mullooly: Right, which is as good a guess as we’re going to get.

Brendan Mullooly: I don’t think that-

Brendan Mullooly: I don’t think they’re doing anything malicious on purpose. They’re making an educated guess, which is what we do in our planning work all the time. So-

Brendan Mullooly: The companies are giving us what they think they’re going to do over the next year. Think back to a year ago. And those sort of go forward estimates, were probably baking in a ton of uncertainty. Everyone was like, “I don’t know. You want me to predict the next 12 months? Have you seen what happened in the last six? Are you joking?”

Casey Mullooly: Right. So these companies, when the pandemic started 15, 16 months ago, at this point, the companies just slashed earnings because the world stopped, basically.

Tom Mullooly: In fact, there was many companies in the S&P 500, who said, “We’re not even going to give you a projection.”

Brendan Mullooly: Which is, I mean, it’s always an honest answer in my opinion, when asking somebody to predict the future. However, last year more than ever, probably refreshingly honest, despite not helpful in terms of trying to think about how things might look over the following 12 months. Let’s say.

Tom Mullooly: Can you imagine if you’re a stockholder in a company and your CEO comes out and says, “We have no earnings visibility, like we can’t tell you what the next 6, 9, 12 months are going to look like.”

Tom Mullooly: Well, depending on what their business is, that’s… That could have been the honest to God truth.

Tom Mullooly: If they were airlines.

Brendan Mullooly Mullooly: Your CEO of an airline, or a hotel chain.

Brendan Mullooly: Well, tell me when we can have people staying in our hotels again at a hundred percent capacity, and then I’ll let you know what it’ll look like, because we’ve done that in the past.

Casey Mullooly: So, fast forward back to today, and I know we’re fresh out of earnings season for the second quarter of this year, and we’ve seen a lot of companies beat their expectations. So now these earnings forecasts are going in the opposite direction. And, that’s what’s bringing down the forward P/E ratio for the S&P 500.

Brendan Mullooly: It’s the same as some of these economic data points that continue to be trotted out by both sides of the political aisle. It’s like, you can play fun with numbers… You can have fun with numbers to say that, percentage increases and this or that, economic piece of data look great over a rolling 12 month period, which may or may not be a good indication of the narrative that you’re presenting.

Brendan Mullooly: However, you can make it seem as such. And I think this falls into a similar category of these are probably the weirdest rolling 12 months for businesses that we’ve seen, at least in recent history. So I think they’re doing the best they can, but yeah, the numbers are noisy and that can fit into something like P/E going down while the price has gone up.

Tom Mullooly: So the point that I took away from reading that post was that if the market participants knew what all of these companies were actually going to earn, in the last 12 months, the market would be even higher than it is right now, but we’re getting these surprises.

So the market got pulled forward because they knew that things weren’t going to be as bad as they were last year, but they really didn’t know how well or how much moving forward they would be. Now we’re finding out the market continues to move higher because we’re finding out, “wow, these numbers were even better than we guessed.”

Casey Mullooly: Right, just because the market’s quote unquote, overvalued, according to this ratio, it doesn’t mean that… It doesn’t necessarily mean that the market is going to go down, which a lot of people tend to say.

Brendan Mullooly: I would say too, though, that people do the exact same thing with just the numerator of this ratio. So it’s not just the P/E that people point to, to say, “Hey, the market’s expensive.” People will just point to the price itself and say, “This can’t continue.”

And I think that you’re forgetting, looking at the P/E instead of just the P, is probably an improvement, but I think you need to go further and understand like what the components of those ratios are.

And even if we do get to a number and understand it and say, “Hey, that’s high historically, in comparison to where we have been” it’s not a timing indicator to say, “Hey, well, the P/E got to this, so that’s it, pack it in and put everything into cash.”

Brendan Mullooly: That indicator does not exist. What it suggests is that moving forward for the next one to five years might be a little on the light side, in comparison to history because in general, stocks do better when we’re coming from low multiples and not high multiples.

Tom Mullooly: Sure. There’s also a 90 year old guy, out in Omaha who has, I think, a pretty good handle on all of this stuff. He’s like, “Hey, look. When we have a low interest rate environment, we’re going to see multiples expanding more than they have in the past when rates have been higher or when the economy has not been growing. And so, it’s okay to let this stuff run a little bit. It’s okay. It’s not going to change its approach, it’s definitely not.”

Tom Mullooly: And as he has said, for the last few years in their annual reports, it gets harder and harder for Buffett to find real values out there, places where he can buy assets at 50 cents on the dollar, it’s getting harder and harder to find. And so they’ve been moving away from the Graham and Dodd model of value and moving more towards businesses that have a moat around them and have really strong earnings.

So no matter what’s happening in the economy, low interest rates, recession, whatever, there’s businesses that are going to continue to grow, that doesn’t stop Warren Buffett from investing, it really shouldn’t stop you either.

Brendan Mullooly: The acronym that Buffett gets slapped on his stuff is GARP. So, Growth at a Reasonable Price. Meaning, all right, this may not be the cheapest in history. We’re not throwing caution to the wind and saying valuations don’t matter. I think you’re wacko, if you would say that.

However, we do need to invest, and this is the best we think we can do right now. So this is what we’re going to do. You want to be aware of it, but it’s certainly not dictating a day-to-day portfolio adjustments. I’m not sure very much is, but yeah.

Brendan Mullooly: I think I appreciate that nuance because I think the insinuation with that line is that it doesn’t matter at all. And that’s not true either.

Casey Mullooly: I love hearing these things from the Lehman pitchbook.

Tom Mullooly: I got to dig that out.

Casey Mullooly: I’m sure you keep it because you keep everything. So they’re probably in the attics somewhere.

Casey Mullooly: And that’s going to wrap up episode 369 of the Mullooly Asset podcast. We hope you have a better understanding of what the price to earnings ratio is. And certainly what it isn’t. A quick one this week, but we will be back for episode 370. Thanks again for listening. And we’ll see you then.

This podcast is for informational purposes only and should not be relied upon as a basis for investment decisions. Clients of Mullooly Asset Management may maintain positions in securities discussed in this podcast.