Should Banks Use Stock Dividends? 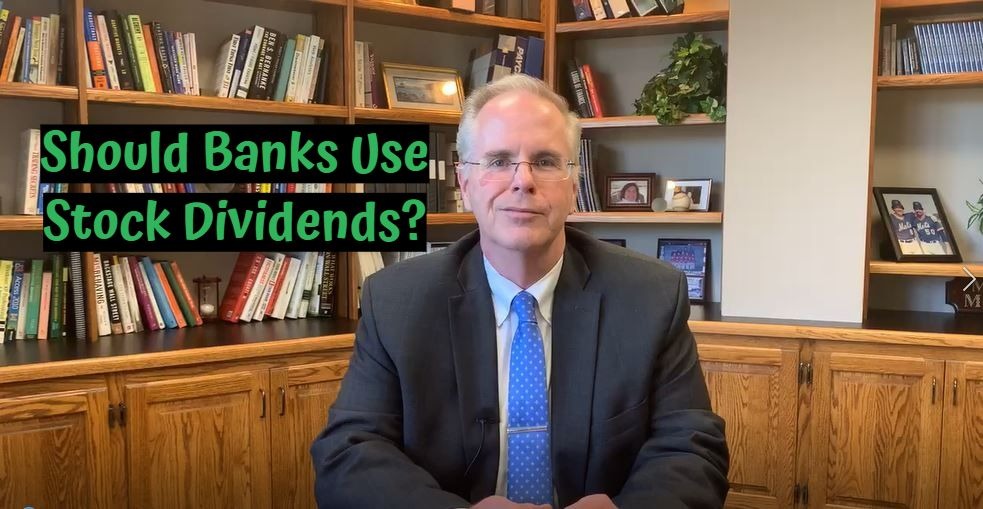 In Ep. 199 of the Mullooly Asset Show, Tom explains why stock dividends might be a good idea for bank stocks during an economic downturn.  He explains how they work and the benefits they offer both the company and the shareholders.

Should Banks Use Stock Dividends? – Transcript

Tom Mullooly: What should banks do with their dividends the next time there’s an economic slowdown? I’ve got an idea I want to talk about with you. So stick around.

Welcome to the Mullooly Asset show. I’m your host, Tom Mullooly, and this is episode number 199. Thanks for tuning in. So what should banks do the next time there’s an economic slowdown? And we’re not just limiting this to banks either. Well back in the 1950s, 60s, all the way into the early 1990s, some companies used to issue stock dividends. Now I’m not talking about cash dividends, I mean actual shares of stock as your dividend. You’d actually get shares as your dividend each year. Sometimes companies, a lot of banks did this, but a lot of companies would issue a small amount of cash and some stock. Other times it was just shares. That’s what you got. And a lot of banks did this, especially banks. But they would just pay their dividends this way. So as an example, if a company had a 5% dividend and you owned a hundred shares, at the end of the year, you’d have 105 shares.

So there’s two benefits to the company for thinking about using stock dividends. The first one is they’re not laying out any cash because they’re taking shelf stock, that is shares that have already been registered. The second benefit is they’re distributing more shares into friendly hands. These are supporters of the bank or of the company that issues the stock. This was a really cool feature and it worked really well if you took a long-term approach towards investing. There were tons of, I was going to say regional banks, but local banks that would do this. And I want to be clear. Some companies will announce that they are declaring a stock dividend and what they’re actually doing is they’re splitting the stock, say a five for four stock split. So if you owned a hundred shares, you would then wind up with 125 shares. That’s not the same as an annual stock dividend that you’d get.

So why am I recommending this and why am I recommending this for banks? Follow the bouncing ball with me. When the economy slows… Banks are in the business of making loans. So when the economy slows down, loan growth slows down and some loans are going to turn bad. You’re not going to be able to get paid back. And so their earnings for banks are going to shrink. So what happens is the company then says, “Hey, we’ve got to preserve our cash so we’re going to decrease the dividend. And we may even get to a point where we eliminate the dividend.” You know what happens to a stock when they eliminate the dividend? Go watch episode 198. Stock is going to drop.

So why don’t banks and other companies have stock dividends? I mean they used to do this in the 70s and the 80s, and even into the 90s. They can preserve cash when times get tough and if you’re a stockholder in one of these companies, like a bank where the stock price has probably been going down, it’s a way to reward shareholders who are losing money with a few more shares. Just give them something for their loyalty. And from a technology point of view, there’s very few stock certificates that are floating around today. So it’s really coming down to a book entry item. It’s a computer entry. I don’t know why this isn’t being discussed more and more. It really could work. I think it’s a great way for banks to help keep their stock price up.

The number one thing that just trashes companies is when they have to suspend or eliminate their dividend. We used to have a strategy years back where we would actually buy companies when they were announcing that they were eliminating the dividend, because that’s probably the bottom or the end of the story for them, and then things can only improve. But stock dividends will keep their stockholders, their supporters in the game a little longer. Could work.

That’s episode 199. Thanks for tuning in.