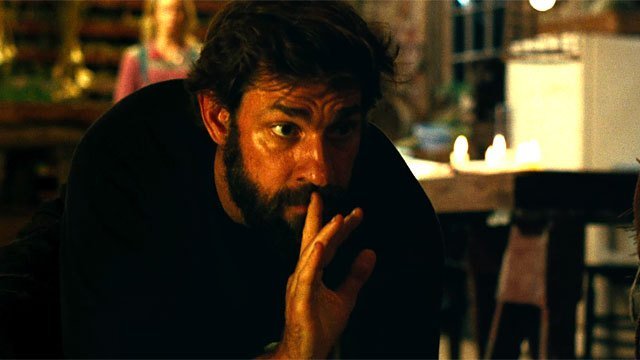 In the movie A Quiet Place, the story follows the Abbott family. The Abbotts live in a post-apocalyptic world that has been decimated by extraterrestrial creatures who hunt by sound. As we quickly learn in the first few minutes of the film, the family’s survival is dependent upon silence. Anybody who makes even the slightest noise is promptly attacked by the aliens.

To give you an idea of just how silent this film is: the first half hour contains no spoken dialogue. The tension created by this silence is captivating. I found myself anxious and filled with dread each time a character did something that might make a sound. The anticipation of noise and the understanding of its consequences had me on the edge of my seat. Every sound, no matter how faint, seemed like it could end the Abbotts.

A Quiet Place brilliantly leverages the power of silence. This contrast effect is often referred to in art as the use of negative space. Negative space speaks to the idea that the absence of something can have as much of an impact as its presence.

The contrast between rising and falling prices creates the same tension I felt watching A Quiet Place. As the market rises, we’re constantly bracing for the next crash. This mindset has been especially prevalent of late with all the talk surrounding the “longest bull market ever”. The longer it’s been since the last crash, the greater the anticipation builds.

This constant anticipation of doomsday creates a paradoxical environment where the higher the market climbs, the more anxiety and dread we feel. It’s why every dip in the market legitimately feels like it could be the top. The perma-bears know this, and will convincingly use the contrast effect to warn you for the hundredth time since 2009 that, “we’re due”.

It’s true that this bull run cannot last forever. Eventually there will be a top before we descend into the next bear market. But how will we know in the moment whether it’s the real deal or a false alarm? Is there any value in predicting sixteen of the last two bear markets? Will there be commemorative plaques for those who nail the top?

If your financial plan’s success is dependent upon calling the top of this market cycle, then you’re right to be worried. Trying to time the market is a terrific way to erode your investment returns into the dirt. Bear markets are an inevitable part of investing, so having a financial plan and investment portfolio that can get you through them (psychologically and monetarily) is vital.