When Do You Want The Best Investment Returns? 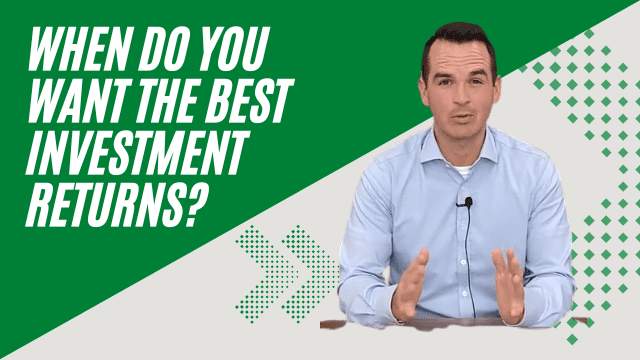 Everyone wants good investment returns all the time. But if you had to choose, would you want them early on or later down the road?

Casey answers this question and more in this week’s video.

He uses the answer to this question, along with another example, to prove that getting money invested in the market early on in your life really does make a difference!

Tune in to check it out.

Retirees Aren’t the Only Ones Who Face Sequence Risk – Morningstar

What Can I Expect My Investments to Earn?

How Are Retirement Plans Affected by Down Markets?

When Do You Want the Best Investment Returns? – Full Transcript

I thought about making a Fido joke about time and dogs, and… Anyway, I’m going to walk through two examples to show you why time is your best friend when it comes to investing. So bear with me here.

Not only does he have less money, but he also put in way more money, three times as much money as his friend Bob did. So time really is on your side.

Interestingly enough, John Rekenthaler over at Morningstar put out a piece that is kind of along the same lines this week, he was looking at sequence of return risk. So usually, when we talk about sequence of return risk, we’re talking about retirees. The risk retirees face is that they hit a prolonged downturn their first couple of years in retirement so their investments take a hit and they’re starting to withdraw the money and that can really put a dent in people’s nest eggs.

We’ve talked about this podcast, I’ll dig up some of those links for you and be sure to include those in the post so you can go and check those out for retirees, but John’s post looked at what sequence of return risk is for workers or for people still in the accumulation phase of their investment journey, for people still putting money into their savings and investment accounts.

And the results were pretty surprising. The best sequence of returns for people still saving money is for the investment returns to be disappointing upfront, and then be really good later down the road as they approach retirement. So kind of the opposite that retirees want, retirees want good in the beginning and then it doesn’t really matter after that.

So some big discrepancies there. But it makes sense because early on you have less in your accounts and if you earn really good returns there, the dollar totals really probably don’t move the needle that much. But later on, when you have saved all of your money, when you get those good investment returns, it really does make a difference.

So I know this year, 2022, we’ve kind of been saying that for younger folks or for people still saving money and still investing their dollars and not in the decumulation phase, we’ve been saying that lower market prices and lower prices overall are a good thing because you can buy more shares with the dollars that you’re investing. So both of these examples go to show that that is true and that time is your best friend when it comes to investing. Sorry, Fido, but time has won over its owners here.

Man, that was really bad, but that’s the message for episode 306. Thank you, as always, for tuning in. Get started, get those dollars invested even if it’s a little bit. We’ll be back with you next week.