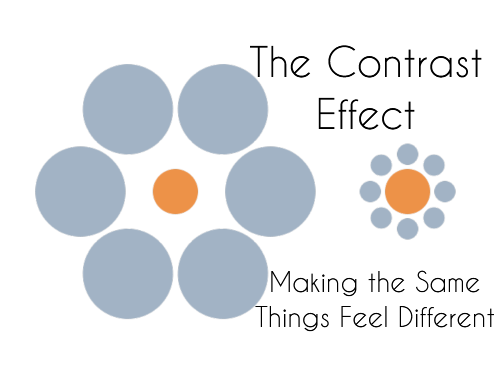 The wise Yogi Berra once said that, “Baseball is 90% mental; the other half is physical”. Aside from a Hall of Fame career, Berra is best known for his entertaining “Yogi-isms”. Despite Yogi’s questionable math, baseball is indeed mental. Coincidentally, it was Berra’s teammate who invented one of baseball’s most mental tools.

Yogi Berra’s fellow Yankee catcher, Elston Howard, created the batting doughnut. Everybody from Little Leaguers to Mike Trout has used one. The premise is simple; warm up with a heavy bat in order to swing your regular bat faster. Except research has shown that, if anything, batting doughnuts may slow down swings.

But batting doughnut use persists. Former Minnesota Twins batting coach, Joe Vavra, explains that, “hitters need to do whatever helps them feel confident. The on-deck circle is like a mental hitting chamber”.

Whether they realize it or not, MLB players are leveraging a psychological phenomenon known as the contrast effect to boost their confidence. 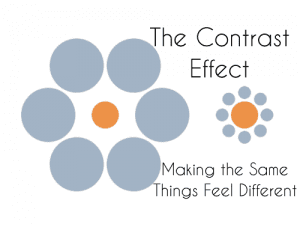 The contrast effect impacts our perception of new information based upon exposure to prior information. Said differently, everything is relative.

One of the oldest examples of the contrast effect is an experiment involving three buckets of water. Bucket 1 contains ice cold water. Bucket 2 contains hot water. Bucket 3 contains room temperature water. Experimenters place opposite hands into the cold and hot buckets for a length of time. Then they take both hands out and place them into the room temperature bucket. The same temperature induces different sensations based upon each hand’s prior environment.

As investors, we endlessly contrast our current vantage point with those from our past. Depending on the framing we choose, this can either be psychological torture or a confidence boost. As Ben Carlson has correctly observed, the best way to win any argument about the markets is to change the time horizon so it suits your stance.

For example, if you have a diversified investment portfolio, there’s a good chance it’s currently not worth as much as it was at some point last year. However, there’s also a good chance that it’s worth far more than it was three years ago.

By tweaking the variables of “compared to what” and “since when”, we can make any investment strategy look like it’s working or not.

This is part of what makes successful investing so tough. The same portfolio balance can simultaneously please and disappoint us. Then we have to balance those conflicting emotions and decide how to proceed. No wonder things get messy.

Investing evokes a broad range of emotions. When we feel ourselves drifting towards the extremes of the fear/greed spectrum, we should consider whether the contrast effect has been weaponized against us. This is one of our best defense mechanisms against being emotionally hijacked into poor investment decisions.