Keeping Your Cool When Markets are Hot 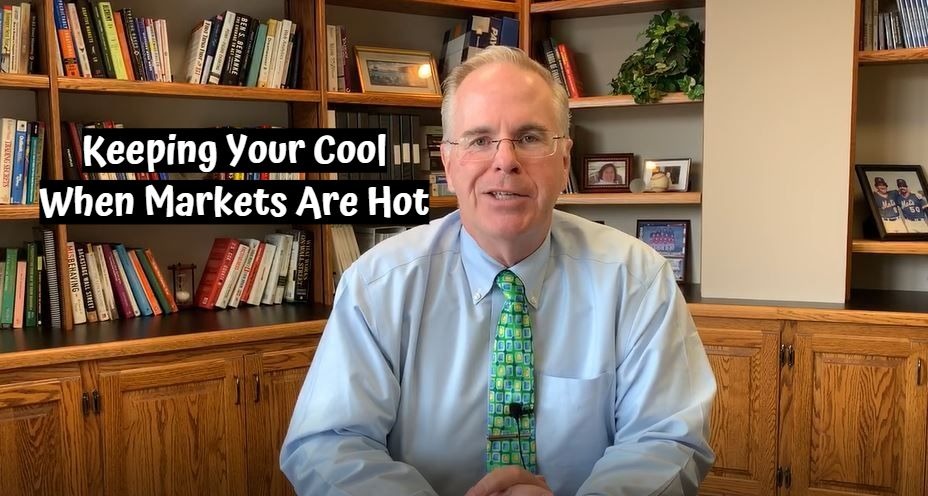 In this week’s video, Tom talks about staying cool while markets are volatile.  He recalls a few conversations back in March where folks wanted to completely jump out of the market, and how those decisions could have cost them over $100,000.  Working with a trusted advisor can really help you keep your emotions in check when things get tough.

Keeping Your Cool When Markets are Hot – Transcript

Tom Mullooly: In episode 202, we talk about keeping your cool when the markets are hot. You’re going to want to listen to this. Welcome to the Mullooly Asset Show. I’m your host, Tom Mullooly. And this is episode number 202. Thanks for tuning in.

I wrote a post the other day and will link to it in the show notes about the news is bad. The news is always bad. In fact, the news will always be bad. I’m certain of that. Remember something that they say in the media all the time. If it bleeds, it leads. And the news, especially the business news, is designed to force you, to trap you into making bad decisions when it comes to your investments. Don’t ever forget that. And these market experts, I’m going to use air quotes, “market experts” come on TV to give you their predictions about stocks, about the market, about the economy. They’re predictions. It’s like you and me talking about the weather. It’s a prediction.

Little tip. When you’re watching the business news, read the titles of the folks that are getting interviewed. You’re going to find that traders want to talk about the economy. And economists, they ask economists where the next bend in the stock market is going to be. Why are they asking an economist who should be talking about growth in the economy? Why are they asking them about where the market’s going to go? Pay attention. If they don’t have attention grabbing soundbites when they’re guests on the shows, they don’t get invited back. So keep that in mind. They’ve got to have something clever to say when they get on these shows.

So look, what do you do when markets are falling apart and you’re scared, you’re nervous? The first thing you need to ask is why am I nervous about this? Let’s talk about that. Did you intend to lower your exposure to the markets but you never got around to it? Do you have money at risk that you really shouldn’t be having at risk? This is money that you might need soon in the next year or two or three. Look, markets are going to be volatile. That is their thing. That’s their jam. That’s what markets do. But trying to rearrange your account while the market’s on fire is honestly one of the worst things you could do.

We took a lot of calls while the market was going down at the end of February, all through March into April and even into May. We got a lot of phone calls, a lot of people nervous, but two calls I want to zoom in on. One of them came from a client who had about $600,000 in his retirement account. At the time he called in the middle of March, the markets and his account were down about 25%. Think about that. That’s $150,000. And he called and said, “I give up. I want to just get out of the market. I want to close all my positions. I just want to sit in cash.” So, the markets came back. I mean, nobody knew at the speed that they would come back, but that’s 150 grand that, that guy would have lost just by listening to his emotions.

Second call that I want to talk about came from another client at the very end of March, when we were just about at the bottom. His accounts started the year at $300,000. The market was now down 35%. So this client is now down over 100 grand. In fact, his account was now, the first digit was a two. He was into the 200s. These are life changing decisions that are being driven by emotions. In both of those calls, people were ready to just quit. They wanted to just throw in the towel because they thought the markets were going to zero, which is just, it’s not realistic.

So look, these losses were avoided. And I have to say that they were avoided in part because these people worked with an advisor and they trusted what the advisor had to say. If you are not working with an advisor and you’ve got money at risk, think about it. Be really smart about this. The money that you need in the next year or the next two years, or even the next three years, it shouldn’t be at risk. Right now people are calling and they’re saying that they’re worried about the election coming up. They’re worried about the protests that are going on. They’re worried about taxes going up in the future.

I don’t know about you, but my taxes have gone up every single year for the last 35 years. Let the market do its thing. It’s going to be volatile. Little picture that I have in my office, it’s a little kid, it’s a stick figure thing where he’s got a yoyo and the yoyo is going up and down, up and down, up and down. But yet he’s walking a hill. That is probably the best analogy I can give you for the market. So if you want to focus on that yoyo going up and down, you’re going to make yourself batty. Don’t do it. Focus on where we’re going. Going up a hill. That’s going to wrap up episode 202. Thanks again for tuning in.