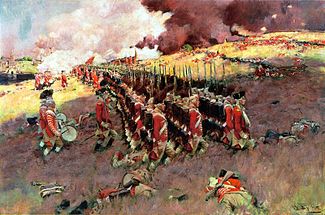 The Battle of Bunker Hill is a classic example of what’s known as a Pyrrhic victory. Named after King Pyrrhus of Epirus, a Pyrrhic victory refers to a high cost victory that turns out to be a net negative in the long run. This is where the expression, “winning the battle, but losing the war”, comes from.

While this example happened over 200 years ago, we’re often faced with our own Pyrrhic conflicts on a daily basis. Here are some financial examples of short term wins with long term negative repercussions:

Winning the Battle: Moving on from out of favor asset classes

Losing the War: Increased risks associated with having an undiversified portfolio

Winning the Battle: Spending the difference when you get a raise at work

Losing the War: Your savings rate lagging the lifestyle it will eventually need to support

Winning the Battle: Having more to spend now by not purchasing insurance

Losing the War: Financial ruin when you have no insurance coverage during an emergency

Winning the Battle: Selling to “stop the pain” when the market goes down

Losing the War: Missing the recovery and subsequent gains

Winning the Battle: Buying a gigantic house you can barely afford to impress your friends/family

Losing the War: Perpetual underperformance, as you chase your own tail

Winning the Battle: Saving money by doing your own will

Losing the War: A potential burden for your heirs after you’ve passed away

Losing the War: Reactionary decisions instead of a process driven by your goals, time horizon, and personal circumstances

Winning battles feels good. Losing wars doesn’t. Learning to be okay with losing some battles in the name of your greater purpose is a critical component to success in life.