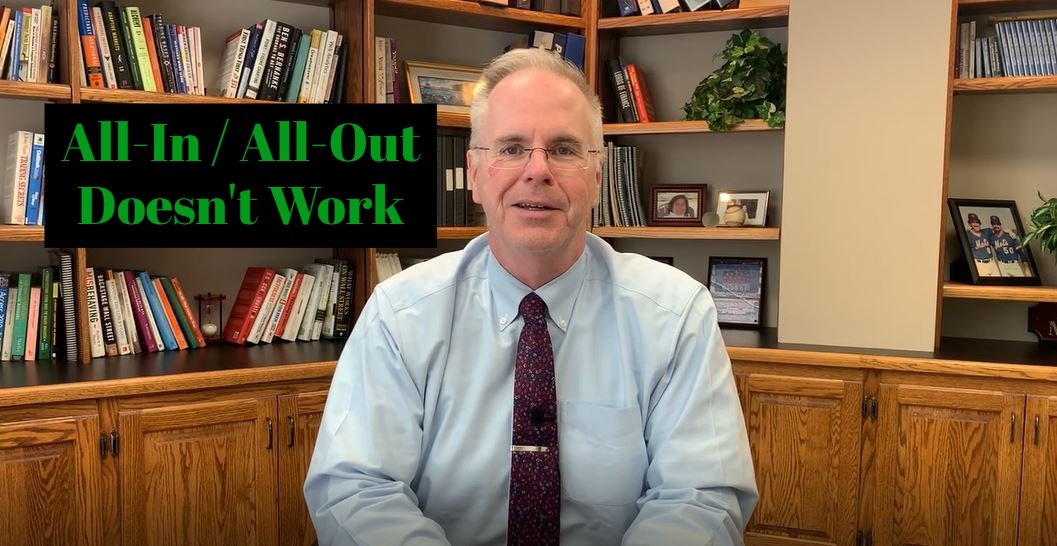 Making “all-in” or “all-out” decisions in the market hardly ever works.

In this episode, Tom explains why most long-term investors would benefit more from a 70/30 stock/bond allocation.

Tom Mullooly: In episode 229, we talk about the one reason why all-in or all-out of the market hardly ever works.

Welcome to the Mullooly Asset Show. I’m your host, Tom Mullooly. This is episode number 229. Thanks for tuning in. All-in or all-out of stocks has worked this many times, one time in 35 years, and that was for a period that wasn’t even six months long. All-in, all-out never… I shouldn’t say never because it did work once, but it hardly ever works because the all out, I’m getting all out of the market, that’s easy. That’s easy. I don’t like the market.

I used to work with a stock broker. He worked on commission. This is 20 something years ago. He would call clients on Friday and say, “I don’t like the market. I don’t want to be in over the weekend.” And he would just sell everybody out. I don’t think that guy lasted in the business too long. But all-out of the market is so easy. It’s getting all-in, much, much harder decision to make. You got because you were scared. What’s going to make it better for you to go back in.

Look, if you find yourself in a position where you may need to withdraw some money in the near future from your account or you’re nervous in general about markets, you may want to consider an allocation, something along the lines of a 70/30 allocation. When we say 70/30, what we mean is 70% of the money is invested in the market, 30% is not. Here’s why you ought to think about something like that if you have a short-term cash need, possibly, in the future, or you’re just nervous in general.

With a 70/30%, in theory, you get about 70% of the move up in markets. You also get about 70% of the move down in markets. So if your neighbor, who’s all-in, sees a 10% drop in the market, you may be down six, seven, eight percent. In general, you’re usually down less than your neighbor, but it also gives you 30% in safer, we’ll say less volatile investments that give you a buffer against volatility and also provides some cash for withdrawals.

That’s really the big thing. If you are going to be making a withdrawal, think about it. You don’t want to be selling stock when the market’s down 30%. You’re going to have to sell more stock to raise the same amount of money. Why not have something like this where you’ve got a cash cushion or some kind of less volatile cushion that you can use if you need to tap into it?

We talk about, on the bond side, putting money into short-term stuff, intermediate stuff, long-term bonds, just to spread the risk out even further. I will say, as a reminder, that if you have a large need for cash, you’re using the money as a down payment on a house or something big is coming up in the next year or two or even three, if you’ve got a really large cash need, then you shouldn’t be investing at all in the market.

Now, in 2020, unlike most years or most periods, this was a time where virtually everything worked at one point or another during the calendar year. We had a period of time in 2020 where bonds were beating the snot out of the markets. We had a period of time where large caps roared, where small caps came back from the dead, mid caps participated, international stocks all of a sudden came out of nowhere.

It really paid to be allocated across a lot of different asset classes. But let’s focus in on a yard stick that a lot of people use. The S&P 500 with dividends in 2020 returned about 17.8%. Now, a 70/30 investment portfolio properly allocated will probably have returned somewhere in the 14, 15, 16% range. Not bad. I will say, it hardly ever works that well, but hopefully you’ll see the point.

Number one, you’ve got pretty close market returns with less money exposed in the market. You had less volatility than someone who was 100% in or 100% out or trying to make that decision over time.

You gave yourself a speed bump by having only 70% of the money in the market, and if something came along and you needed cash for some unforeseen reason, it’s there, you can take it out of the bond side of the portfolio. That bond side of the portfolio also has the… It gives you the ability to buy some more stock or buy something that’s really gotten washed out over a period of time.

That all-in, all-out decision is really one you shouldn’t even be considering. If the markets freak you out and you have to think about jumping all-in and all-out, the stock market is not for you. It’s certainly something that you really need to think long and hard about. That’s the message for episode 229. Thanks again for tuning in.