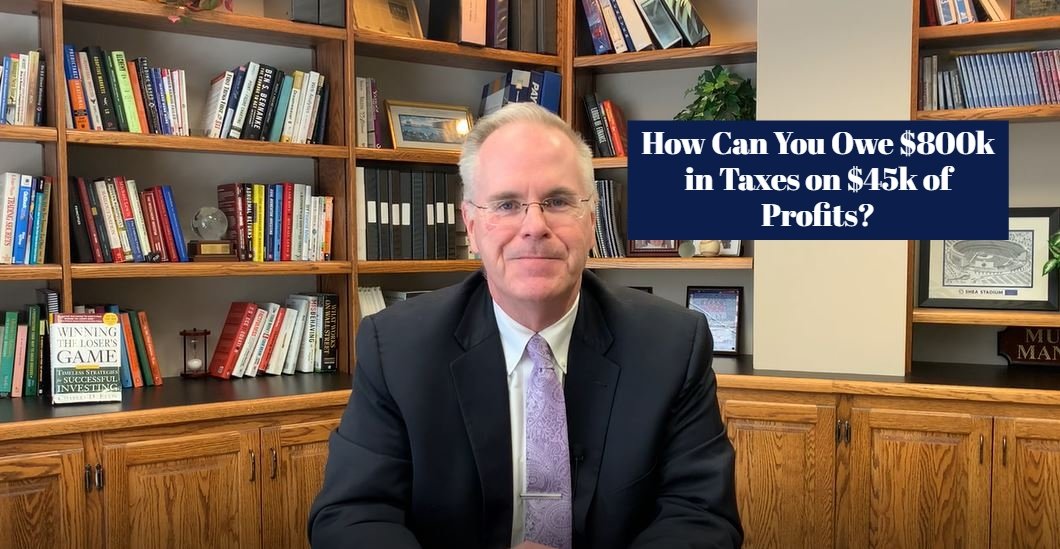 Is it really possible to owe $800k in taxes on $45k of profits? The answer, sadly, is yes. In this video, Tom explains how one individual got himself into a tax nightmare by day trading his account on margin and not understanding the wash sale rule. Check out this video so you don’t make the same mistake yourself!

Welcome to the Mullooly Asset Show. I’m your host, Tom Mullooly. And this is episode number 239. Thanks for tuning in. An article that we’ll link to in the show notes for Morningstar from March 26th of this year, 2021, talked about how a particular individual in Arizona will owe $800,000 in taxes if they’re making $45,000 in stocks. How did he do it? So the story starts really just about 10 days ago, when a local financial planner in Arizona received an urgent message from someone saying, “There’s got to be something wrong with my accounts. I have a day job where I work full-time I make $60,000 a year. I have a Robinhood account on margin that I started with $30,000. But yet it appears that I owe $800,000 in taxes.”

So it turns out that Robinhood gave him $90,000 of buying power on margin. So we put $30,000 up. He was able to swing around $90,000 worth of securities on margin. And it turns out that this guy who works full time for an insurance company was able to do 10 to 50 trades in his account per day in the year 2020. Is this guy working full time? He wouldn’t last a week at Mullooly Asset Management, if he had time to do that many trades. Anyway, in calendar year 2020, his $30,000 generated gross proceeds. That’s just the proceeds from the sales, not even the buys, the sales, gross proceeds of $45 million.

If you have long-term capital gains, you pay, for most people, a reduced tax rate. That’s because you have to hold these investments for a year plus. Everything else that you sell in less than a year is considered a short-term gain. And that is taxed as ordinary income. So it’s taxed at your regular bracket. Since he had so much income, he had $1.8 million in profits. It’s all considered ordinary income. This guy’s getting taxed like he’s in the NBA.

So he’s in a very, very high tax bracket. He also likely had losses that, trades don’t always work out, that’s the nature of the business. But he was probably trading back into the same stocks or similar stocks. If you do that within 30 days, you’re subject to what’s called the Wash Sale Rule. And anybody who’s licensed in this business knows what the Wash Sale Rule is. But people who open accounts on Robinhood, they may not know this. So the Wash Sale Rule, Wash Sale, says you cannot take a loss on your taxes if you buy back the same or similar stock within 30 days. The loss is going to be disallowed.

So with this guy, any losses that he took, he couldn’t use at all. What a mess. So he was disallowed all of the losses, because he didn’t wait the 30 days to buy back the stock, whatever stocks he was trading. So a couple of takeaways with this. There’s three takeaways that I see. Trading, especially margin trading is really dangerous. Now it’s true that option trading is dangerous. Driving a car can be dangerous. If you don’t know what you’re doing, anything can be dangerous. That’s take away number one.

Number two, the best employee at a brokerage firm is Mr. Margin. Mr. Margin never calls in sick, never takes a vacation. He works 24/7. You are paying interest when you borrow money from a brokerage firm. And guess what? When your stocks go down, the brokerage firm will have a margin call because they’re going to get their money back.

They don’t really worry about you. They worry about getting their own capital back. So brokerage firms like to lend. Robinhood, when you open an account on the Robinhood app, it defaults you into a margin account. This could lead to some reckless trading.

The last thing, and it’s kind of the overarching theme with all of this is that margin kills people. When your equity is down to the point where you have a margin call, and you don’t have any more money to put into the account, you have to sell 3-1/3 times the amount of the call. If you have a $10,000 margin call, you have to sell $33,000 worth of stock. For most people, that’s a wipe out. Remember people didn’t jump out of windows in 1929 because they lost their stock portfolio. They did all of this on margin. And in some cases they were doing at a 10% equity.

So not only did they lose their investment portfolio, they got wiped out. They lost their homes. So margin kills. You’ve got to really know what you’re doing. Just like driving a car. If you don’t know what you’re doing, you can have a car wreck. Be super careful, know the rules before you’re getting involved. That’s the message for episode 239.

If you would like to discuss these topics more, click here to schedule an initial call with one of our team members! There is no cost or obligation.