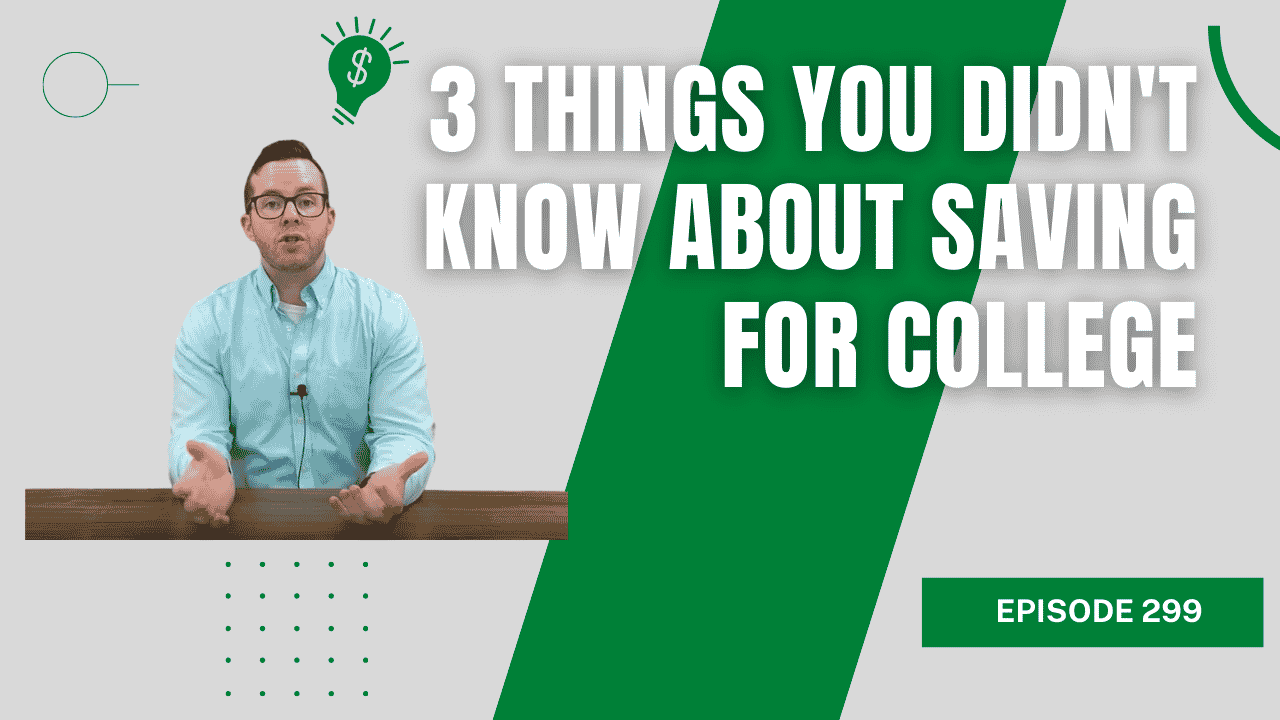 In this week’s video, Tim covers 3 things you might not know about saving for college.

Can unused 529 account funds be used to pay off student loans?

And what type of 529 plan should you use to build up that college savings fund?

Tim answers those questions and more! Be sure to check it out and find out some interesting information you might not have been aware of.

The Two Types of 529 Plans – Living With Money

Tim Mullooly: In episode 299, we’re going to talk about what you don’t know about saving for college.

Tim Mullooly: Welcome back to the Mullooly Asset Show. I’m your host for this episode, Tim Mullooly. This is episode number 299. We’re closing in on 300 pretty quick. Thanks for tuning in. So today we wanted to talk about three different points that you guys might not know about saving for college.

Specifically, we wanted to talk about 529 plans.

So the first point that I wanted to bring up is that because of the SECURE Act in 2019, unused funds in a 529 plan can be used to repay the beneficiary’s student loan debt. Up to $10,000 can come out of the account if they’re not used for qualified tuition expenses or anything that a 529 plan can pay for.

If there’s leftover money, up to $10,000 can be taken out tax-free to repay the beneficiary’s student loan debt. And we all know how big of a problem student loan debt is for a lot of people.

The second point that we wanted to talk about today is that in April, there was new legislation proposed. It’s called the Helping Parents Save for College Act.

And what that does is that it would allow unused 529 funds to be, under limited circumstances, to be rolled into a Roth IRA.

That would help people jumpstart their savings for retirement if the college portion of their life is over, they don’t need it for the education side of things anymore. There are a limited circumstances where you’d be able to transfer that money into a Roth IRA.

Tim Mullooly: There aren’t many details about this out right now, because it’s just proposed legislation. This doesn’t mean that it’s going to pass or that it’s definitely going to come into effect. But two things that I saw in an article, which we’ll link to, is that the account needs to be open for 10 years before you can roll the money.

And the money in the account needs to have been in the account for five years before it can be eligible to be rolled over. And I’m sure there’s going to be a ton of other limitations so that people don’t take advantage of this.

Because the contribution limits for Roth IRAs aren’t very high, so if you could potentially think about backdooring it through a 529 plan, I’m sure there’s a million different ways that people would try and utilize this to their advantage. But again, we don’t have all the details, something that could be coming in the future.

Tim Mullooly: And the third point is actually a pretty basic point about 529 plans.

I wrote a post over on my blog called Living With Money a few weeks ago, and it just outlines the two different types of 529 plans.

What is best way to save for college?

If you know what school you’re going to go to, you can prepay your tuition in today’s dollars and lock in your price, so to speak, for college down the road, when the child or the beneficiary is ready to go to school.

Tim Mullooly: Like I said, if you know the school that your child will be attending for sure, this could be a good option because we all know college costs rise every year. So it could be smart to prepay some of that tuition now so you don’t have to pay more for it in the future. But I don’t know how many people know for sure that my kid is going to this school or this school specifically. So that’s why they tend to be less popular. But there are two different options when you’re considering 529 plans.

Tim Mullooly: So there’s a lot to know about 529 plans, what you can and can’t use the money for and proposed changes that might be coming in the future and the different types of plans that are out there. We just wanted to touch on these three points in this video for you today. Next video will be episode 300, big milestone for the show. Thanks for tuning in to episode 299. We’ll see you next time.