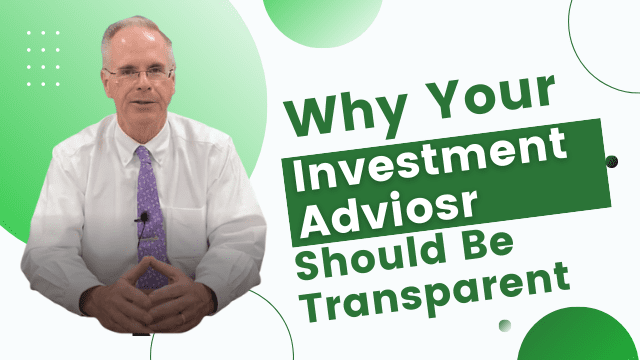 In this week’s video, Tom references a survey done by AARP that shows 45% of people would rather go to the dentist than meet with an investment advisor.

People deserve complete transparency when working with an investment advisor. When folks don’t understand their investments and aren’t provided with all the details, it leads to bad results.

That’s why we believe in outlining Our Process and Our Fees well head of time. So everyone can understand what they are signing up for.

Why Your Investment Advisor Should be Transparent – Full Transcript

Tom Mullooly: 45% of people who answered a survey said they would rather go to the dentist than meet with their financial advisor.

Welcome to the Mullooly Asset Show. I’m your host Tom Mullooly, and I want to talk about a survey that AARP put out not too long ago, in 2020. But the long and short of it was, 45% of the responders, nearly half of them said that they would rather go to the dentist than meet with a financial advisor. Now, the folks who were surveyed were aged 40 to 59. These are people who should be meeting with a financial advisor.

It was pretty interesting and eye opening, at least for folks in our line of work. The general take from AARP was, people would rather go to the dentist because we don’t trust you guys. And they may be right. Before I get into some more facts, I want to share something with you that I’ve always thought. There was a Supreme Court justice over 100 years ago, Louis Brandeis, who wrote in 1913 that, “Sunlight is the best disinfectant.”

And what he was referring to is that in order to avoid financial crimes, which is actually what he was writing about, it’s better to be honest and transparent and that transparency thing, really rings true in our industry. So many people come in to see us and they’re like, “Nobody ever explained this to me. Nobody ever told me this is how it works.”

The takeaway from all of this is, when you’re looking for an investment advisor or a financial advisor, it’s important to look for someone who is a fiduciary. That’s someone who’s got an obligation, a legal obligation to act in your best interest all the time.

Does it matter if you work with someone who gets paid on commissions or someone who’s paid on a fee only basis? It doesn’t matter, as long as they disclose to you, up front, how they get paid, that’s fine. We work on a fee only basis here. We feel it’s in the client’s best interest, but there’s a lot of ways to get the job done in our line of work.

How do you exit? How do you get out of these things? It’s important to talk about the end, in the beginning. This is all part of being transparent. This is why people would rather go get a root canal than talk to a financial advisor, which is a real shame. That’s the message for episode 313. Thanks for tuning in.