What’s Been Going on in the Stock Market? 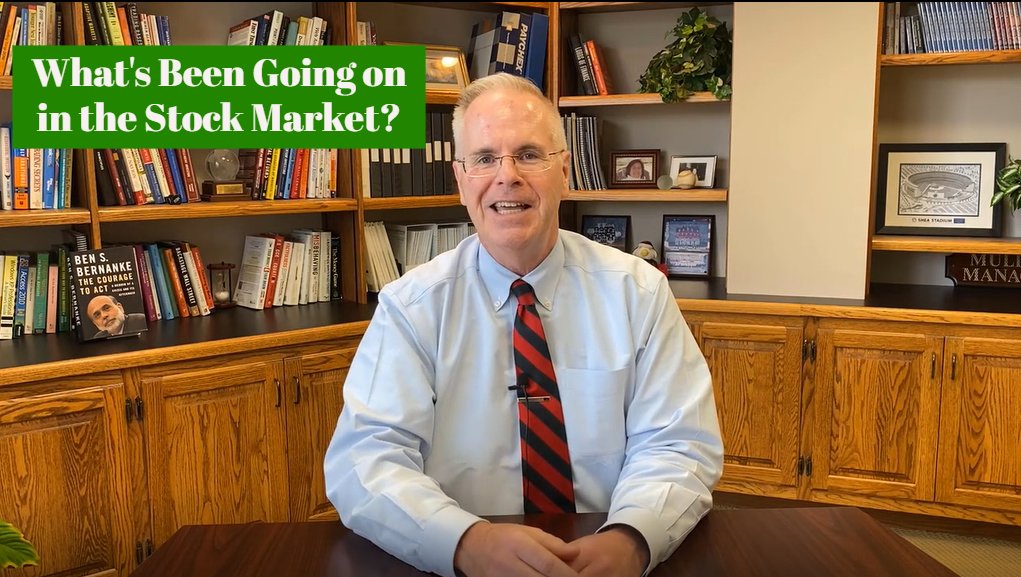 The stock market has seen some volatile moves in both directions over the last week.

In this week’s video we wanted to put these moves in perspective and remind folks that, as long as you are taking the appropriate amount of risk, this is okay! And should be expected.

We love to remind folks that the stock market, on average, experiences a 10% pullback once per year. Just because we see some red numbers doesn’t mean we should rip up the script.

What’s Been Going on in the Stock Market? – Full Transcript

**For a downloadable PDF version of this transcript, click here**

Tom Mullooly: We’ve had a volatile week around here. So in episode 255 we’re going to talk about it. Welcome to the Mullooly Asset Show. I’m your host, Tom Mullooly and this is episode number 255. Thanks for tuning in. So we’ve had a volatile week in the market on Monday, July 19th, 2021. The Dow Jones was down 800 points that day. Very curious though between Tuesday and Wednesday’s markets, we recovered all of that loss. And in fact we’re a little bit ahead now after Thursday’s move in the market.

It’s a reminder to everybody involved that markets can and do go down. It’s okay and it’s part of the plan. When we talk to clients about what to expect from market returns over time, we pack in good and bad markets. Stocks, they’re always going to be volatile and you want that. You want some volatility from your investments. It’s just got to be in the right proportion. Folks that have 100% of their investments in the market and they want something that’s going to be safe and secure it’s a bad match. It’s not going to work.

What I want to also mention is that last week, the week before this, the market the Dow Jones hit 35,000 for the first time no news. Wasn’t even a headline in the newspapers, on the media, anywhere. We went through 35,000, no one even talked about it. So one of the little anecdotes or stories that we use here when we’re speaking with clients is markets tend to go up by taking the stairs. They go very slowly, almost methodically. But when markets go down they take the elevator, markets go down fast.

Tom Mullooly: They go up slow, down fast. We’ve been well overdue for a pullback. So let’s talk a little about this. The market has not seen a 10% pullback since March. That’s March of 2020, over a year and a half ago. And that pullback you can’t really call it a pullback it was about 35 or 40%.

What you need to know we’ve gone a long time now without a normal pullback. But over the last 90 years we’ve had 90 pullbacks of at least 10%. Remember that, very important. So on average we see a 10% pullback about once a year. Now here in 2021 on a 34,000 point Dow that’s 3,400 points in a 10% pullback. So 800 points that we lost on Monday sure sounds like a lot, but really when you do the math, it’s just a smidge over 2%. So something else I want to bring, up in recent days the market’s been a little sloppier than it had been in the past.

Tom Mullooly: It’s important to know that most of the sloppiness has started in the overseas markets, the markets that trade overnight. And when we wake up in the morning and we come to the office, we see the futures down several hundred points that has been carrying through to the US market.

Tom Mullooly: So as foreign markets tend to be a little volatile that follows through to us. Most of the sell offs have been happening in overnight markets. Same thing with the economies that are around the globe.

We’re seeing that volatility play out a lot more. So something to be aware of as we look for this, but the main thing that we want to remind folks is that markets average a 10% pullback on average about once a year, it’s been that way for 90 years. We need to be prepared for that. And even with a 10% pullback, it’s not a reason to rip up the script. We’re going to be okay. That’s the message for episode 255. Thanks again for tuning in.

Hear more about why it’s important to have a rules based approach to investing in another recent video!