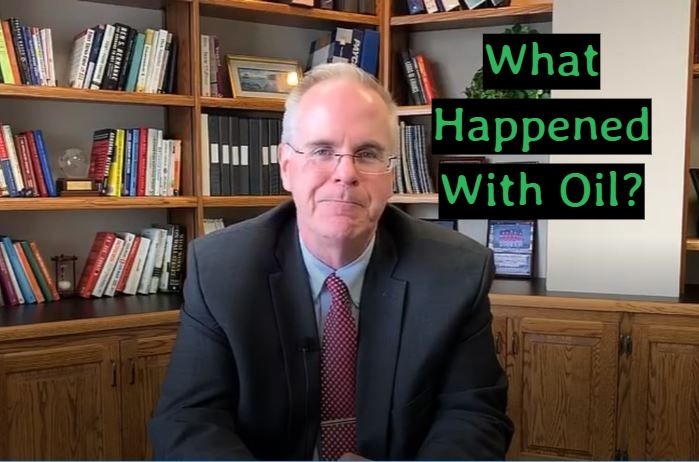 In Ep. 189 of the Mullooly Asset Show, Tom explains what exactly happened with oil prices on Monday afternoon.  He explains the difference between the price of crude oil and the monthly oil futures contracts, how often oil prices “crash”, and what happens when they do.

What Happened With Oil? – Transcript

Tom Mullooly: In episode 189, we’re going to talk about oil. It’s been in the news, so tune in. Welcome to the Mullooly Asset Show. I’m your host, Tom Mullooly. What in the world is going on with oil? We’re recording this on Tuesday afternoon, April 21st, 2020. At the moment I’ll start this by saying crude oil is trading at $24 a barrel. What happened yesterday? As I said, crude is now at $24. In January it was trading at 53. It broke support. It was in a free fall until it actually reached $18 yesterday, but yesterday some oil futures contracts were acting really strange.

Now, before I get into this, I want you to understand that one futures contract for oil is 1,000 barrels of oil. So the futures contract that expires for May delivery actually expires right now a few days before the 25th of the month, so the May futures contract expires now. Here’s what happened. Over the last couple of weeks we saw Saudi Arabia and Russia try to flood the markets with oil driving the price down.

It was believed that their strategy was to bring the US to the table so they can negotiate or collapse the shale market. Over the last two weeks, we’ve seen oil storage facilities in Cushing, Oklahoma, that’s where all the oil gets delivered to, reached its capacity. There was just no other places to store oil. Why is that important? When futures contracts settle, the holder of the futures contract has to accept physical delivery of the contract. That’s kind of a problem when there’s no storage available. All the storage facilities in Cushing have been filled for about 10 days now. So as the May contract approaches expiration, as it’s doing right now, nobody wants to hold the contract. They don’t want to be long the contract. So they will literally pay someone to take the contract, to take delivery off their hands because they’ve got no place to put it.

So yesterday we saw oil futures start at $10 a barrel per contract, then $5 per contract. Then it went to zero around this time yesterday. Then it actually went negative. They were paying people to take their futures contract away from them. So really weird to see oil futures contracts trading negative, but it was, I got to get out of this at any price. So can the same thing happen now? That was May. Can the same thing happen with June? Maybe. The June futures contract today as we’re going to record this is now down to $11. So understand that there’s tons of supply around, tons of it, but there is very little demand if any, and there is no storage to be had.

Oil prices falling definitely hurts some businesses, but it does help some other businesses. It hurts the drillers. It hurts the exploration companies. It hurts the refiners. It hurts the truckers. It hurts people that are involved in the manufacturing and the delivering of oil. Who does it help? Well, it helps the consumers. You’re going to find out how much you pay in gas taxes with oil dropping like this. It helps chemical companies. That’s the primary ingredient they use to make plastics, to make a lot of different things. It helps airlines if and when they get off the ground.

So falling oil prices can contribute to an economic slow down. Is it always the source of a recession? No. Oil has crashed at least once in each decade that I’ve been paying attention to this. In the ’70s, in 1971 and ’72 we saw oil down at $20 a barrel. By mid-1979 oil was trading, because OPEC got their act together and got organized, oil in 1979 reached $100 a barrel.

So oil does crash and it happens every now and then. It doesn’t mean it’s the end of the world. It doesn’t mean that we’re going to have a recession. It doesn’t mean that things are … It doesn’t really mean much in terms of what’s going on, but it makes headlines when you see oil contracts trading with negatives in front of them. That’s really unusual, but kind of weird circumstances why that happened yesterday. People just had to get rid of these things and they were willing to pay people to take it off their hands.

That wraps up episode 189. Thanks for tuning in.