What Did Warren Buffett Actually Say? 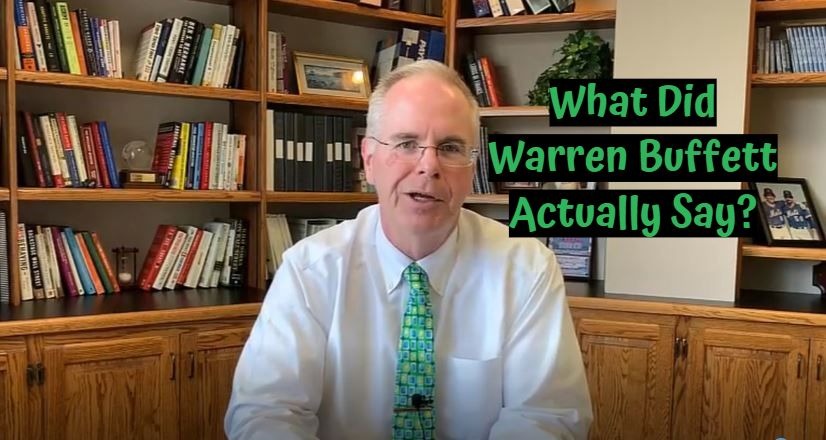 In Ep. 191 of the Mullooly Asset Show, Tom talks about the annual Berkshire Hathaway meeting and comments made by Warren Buffett.  A lot is being made about his comments, but what do they actually mean for every day long-term investors?  It sometimes gets forgotten that Buffett runs one of the largest companies in the world, and isn’t just buying/selling investments in his personal trading account.

Tom Mullooly: In episode 191 we’re going to give a quick review to what Warren Buffett said over the weekend. I’m sure you’re going to want to tune in. Welcome to the Mullooly Asset Show. I’m your host Tom Mullooly, and this is episode number 191. A lot of hubbub discussion over the weekend after Saturday evening’s video annual meeting with Warren Buffett and Berkshire Hathaway. That was on May 2nd, Saturday about five o’clock. A couple of points that we should talk about. They announced Berkshire announced that they sold all of their airline positions. That was the big headline coming out of the meeting. So he’s referring to the holdings that Berkshire Hathaway had. Remember they’re one of the largest insurance companies in the universe. I tweeted when this discussion started picking up Saturday night that I said, “I never really understood how airlines fit into his usual approach. Anyway, this is a value investor going back to the days of Graham and Dodd. This would never make sense for a value investor to buy airlines. They don’t make money until they’ve got an 80% full plane leaving the runway.”

So, Buffett and Charlie Munger both speak of holding periods as a lifetime. In fact their quote is, “When we find outstanding management with an outstanding business, our favorite holding period is forever.” But you need to understand that Berkshire Hathaway has bought and sold many, many, many, many, many different companies over the last 50 years. It’s very rare that Berkshire Hathaway will go all in in one swoop and buy a company in a single transaction. The last time they did that I think was Precision Castparts. Typically what happens is companies will catch their attention and they’ll start buying. And then they’ll add to their positions if the story continues over time. But if the story changes, they’re just going to move on. Berkshire’s quarterly report, their list of transactions each quarter gets watched very, very closely and so they see what positions are added and which ones are dumped.

Berkshire like a lot of companies including ours, we are constantly reviewing holdings, and have strict guidelines about when and where we’re going to be buying and selling. They do the same thing. Two other points that are circulating on finance Twitter this morning, folks are recycling a headline comment that Buffett made in February where he said, “We certainly won’t be selling during this market drop.” But then by May he announced that Berkshire had sold all of their airlines. You got to remember something, during February well the last half of February and through March the market was terrible. April however totally different story. The market was terrific. So the second thing that we want to talk about is he commented that, “$137 billion in cash isn’t all that much when you think about worst case possibilities.” And that’s just a… It’s bad optics when you say it like that. Because it sounds like you’ve got $137 billion sitting in your checking account. That is not the case. I have to believe that he’s referring to the $137 billion that Berkshire Hathaway has in cash.

Remember as I said earlier, they’re one of the largest insurance companies on the planet. So they may be paying for things like business interruption policies. They have to be thinking about things like that. So when the economy starts to turn down, very bad for insurance companies. And so as an insurer he has to be ready, he has to stand ready to pay out claims. So you also, you know, in comparison, he also said on the very same call that, “Berkshire can spend $30 billion on an acquisition if one came along.” So folks are parsing out his words, they’re dissecting them live on Twitter. They’re trying to interpret them, his words like they’re tea leaves.

He said a lot of optimistic quotes on the call on Saturday as well. So take what you will from the Berkshire Hathaway call this past weekend. There’s things in there if you’re optimistic, there’s things in there if you’re pessimistic. I think like the article in the New York times today, he’s just being realistic. You have to look at all the possibilities that are out there. He didn’t come out and say anything definitively positive or negative. Just kind of gave you the story.

Which is what we try to do here and we appreciate you tuning into our episodes. This is going to wrap up number 191. Thanks.