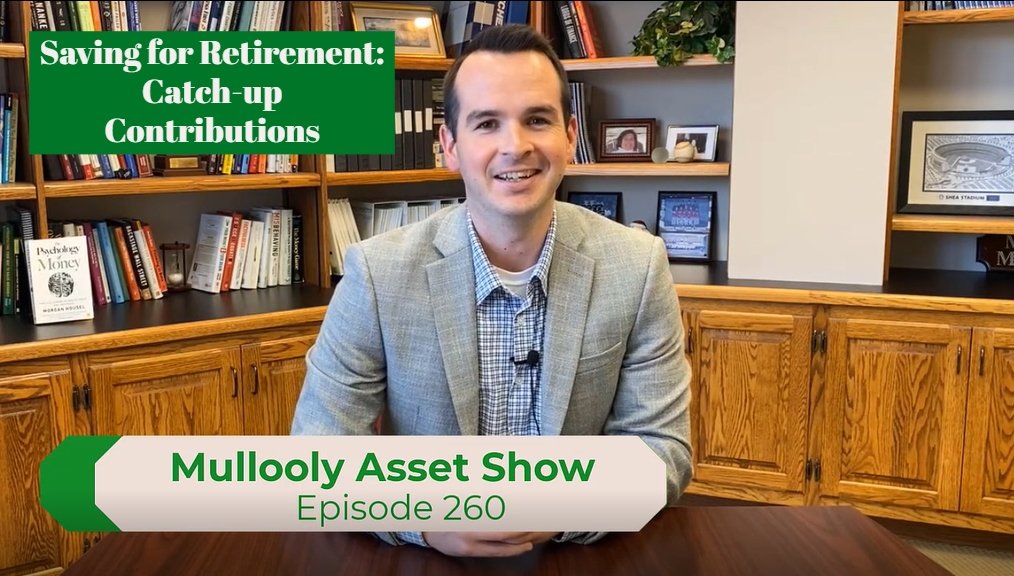 In this week’s video, Casey discusses a proposed increase to the catch-up contributions for retirement account savers.

These catch-up contribution changes being discussed would help “average workers” save more as they get closer to retirement age.

We break down all the specific in’s and out’s in this one!

Here’s Who Would Benefit From Proposed Changes to 401(k) “Catch-up” Contributions? – CNBC

**Click here for a downloadable PDF version of this transcript**

Casey Mullooly: Welcome to the Mullooly Asset Show. I’m your host, Casey Mullooly and I’m wearing a jacket this week. Thanks for tuning in. So there’ve been some proposed changes to the catch-up contributions for retirement account.

These are proposed changes that are being talked about and debated in the halls of Congress, in both the Senate and the House. So we want to preface this all by saying that nothing is set in stone yet, but it looks like it’s coming through the pipeline. So we should be talking about it and paying attention to it.

Casey Mullooly: So it sounds like good news for people who might not have started saving for retirement until later in life, until they got their ducks in a row, maybe paid off some debts and were a little bit more financially secure, and then started socking away money for retirement.

It sounds like a big win for people in that situation. Interesting sidebar though, the catch-up contributions were originally designed back in 2001, 2002, because Congress was alarmed that Baby Boomers were not saving enough for retirement. So yes, it’s not just these Millennials living in their parents’ basements on the internet all day, who don’t save for retirement.

Casey Mullooly: I know Tom’s said this on multiple videos and podcasts, but it seems like these stories surface about every single generation. So I just had to get that in there for all the Boomers out there. So generally speaking, more money saved for retirement is a good thing, and this will help folks achieve that.

Interestingly though, only 15% of eligible workers actually utilize the catch-up contributions according to Vanguard’s How America Saves Report, 15% isn’t a lot. So maybe these increased changes will get some more folks on board and piling money into their retirement accounts.

But we want to caveat this and remind folks which we’ve talked about on a recent podcast as well, that just blindly pouring as much money into your retirement accounts on the precipice of retirement might not be the ideal strategy.

Casey Mullooly: It could be useful, and it could be smart from a tax standpoint, and from a money accessibility standpoint, maybe to stockpile some cash. So it can take some sequence of return risk out of putting this money into the retirement account.

If you’re going to be putting almost $30,000 into your retirement account, when you’re 64 and then starting to withdraw the account when you’re 65, you should think twice about putting all of that money in there. It might make sense to stockpile some cash, and just not have that money at risk in the market. Something to think about.

Casey Mullooly: Like we said, this is all proposed changes, so nothing’s set in stone yet. Catch-up contributions are a great thing that we recommend to a lot of people to take advantage of. Those are your highest earning years.

You can usually sock away the most money, and it sounds like it might even be getting better for workers. So definitely something to pay attention to. I know we’ll be on the ball here about it, but that’s the message for episode 260. Catch up, if you can, and we’ll see you for 261.