The Plan Remains the Same Regardless of the News 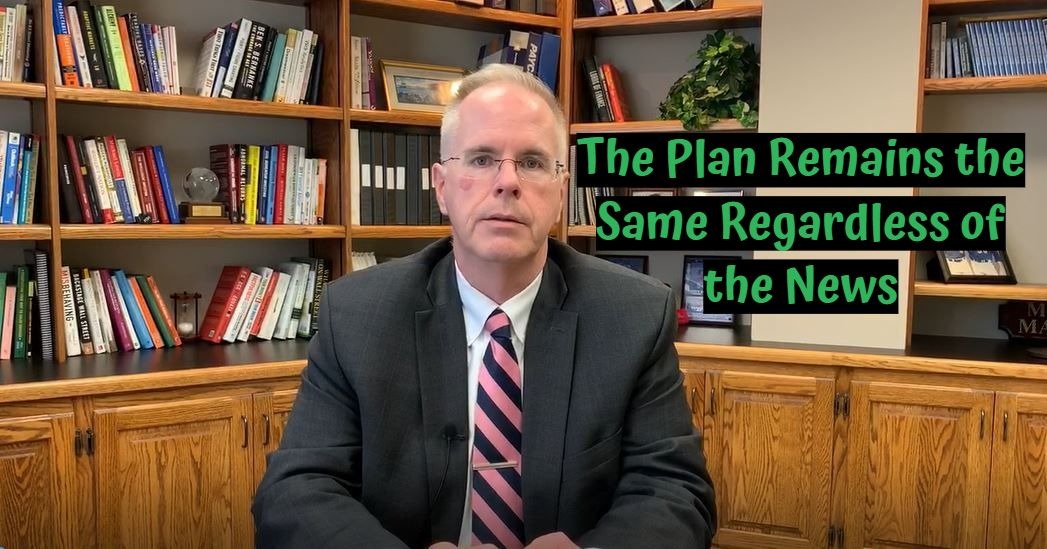 We could record this video on Monday before the election, and post it today before results are final because the message DOES NOT CHANGE. Regardless of the news, our message stays the same. An election is not a reason to rip up a long-term strategy.

The Plan Remains the Same Regardless of the News – Transcript

Tom Mullooly: In episode 218, we unlock the secret to investing success.
Welcome to the Mullooly Asset Show. I’m your host, Tom Mullooly, and this is episode number 218. Thanks for tuning in, and if you’re watching this on YouTube, hit that red Subscribe button. I want to tell you that we’re recording this video on Monday, November 2nd, 2020, so we are in an interesting situation. We record on Monday, on Tuesday is the presidential election, on Wednesdays, we typically post this on social media, so if you’re following us on YouTube, Twitter, Facebook on the web, you can watch this video on a Wednesday. We also send it out as part of our links email on Friday afternoon, but we’re recording it on Monday, so we don’t know what’s going to happen with the election.
The reason why I laid all of that out is because the message is always going to be the same, always going to be the same: It really does not matter in the big picture who wins the election on Tuesday, because any money that a client is going to need in the near-term shouldn’t be at risk in the stock market, and so clients who need money in the next three months, six months, nine months, that money is safely squirreled away in a short-term bond fund or a CD or in cash, and the rest of your account can let the market do what the market does.
As I mentioned in last week’s video, most of the money that we manage for our clients is long-term in nature, a lot of it for retirement, and so we don’t want to be ripping up the script every time that there’s a new story that comes out on the horizon, and so when you look at that formula that we have where we record on Mondays and some big event happens on Tuesdays, you’re not going to see this until Wednesday or maybe Friday, fill in the blank. Next time, it could be a virus. It could be a fire, it could be a flood. It could be some kind of event that happens. It could be the Fed raising interest rates. It’s okay, because we have a plan to manage your assets in a prudent manner.
We don’t work on commission here at Mullooly Asset Management. We have a fiduciary obligation to our clients to make sure that we’re investing this money that you’ve entrusted to us properly and we take that obligation very seriously, and so just look at last week: Market was down 6%. What I pointed out to some folks just on Friday afternoon, in the last half hour of trading last Friday, the market was actually up 300 points. However, no one ever saw that because the market was down between four and 500 points most of the day, Friday, but it rallied 300 points up towards the end. If your perspective was hour by hour, market was up 300 points. If it’s day by day, well, the market was down 150 points. If you’re going week-to-week, the market was down 6% last week.
However, for the folks that focus on stuff like that, I want to also point out that from early September through mid-October, the market was up 10%. up 10%, down 6%, this is what markets do. If you were to net them out, you would see that “Hey, over two months, the market’s up 4%. Not bad.” It’s the day-to-day watching and listening to people talk about it on the financial media that forces you, forces your brain into making an emotionally bad decision. Try not to let that happen to you. Very important message to keep in mind: The plan stays the same, regardless of the news. If something untold were to unfold, we are ready to go.
Thanks again for tuning into episode 218. Catch you next week.
If you would like a PDF version of this transcript, please follow this link for a download!
← Previous Next →