TARP Funds Returned by NJ Bank, Is It a Good Investment?

The Treasury Department said Friday that Sun Bancorp Inc. of Vineland, New Jersey, repaid $89.3 million, money it originally received on Jan. 9.  They gave back the TARP money.  Does that make it a good investment?

Sun Bancorp has sufficient funds to complete the redemption.

“When the Capital Purchase Program (which is part of the Troubled Assets Relief Program, or TARP) became available to well capitalized and healthy financial institutions like Sun, it was a positive partnership between the government and business to stimulate the economy through additional lending and community support,” said Thomas X. Geisel, president and chief executive officer of Sun Bancorp.

Geisel continued: “The partnership then became politicized, the rules and regulations changed, and the dynamics of the partnership substantially shifted.  These changes significantly restricted the way we support our customers and communities, as well as the way we run our business.”

I’m sure the Bank did not appreciate the Government getting into their business anyway.  Neither would too many businesses.

But here is where it gets interesting:

Part of the TARP deal was return of the money, plus interest, — plus warrants — to purchase shares in the bank.  1.5 million shares of the bank.  This represents nearly 7% of the entire shares issued.   They can exercise the warrants at $8.68, the stock closed Friday at $7.00.  This creates significant overhang in the stock.  I say that because a major stockholder (the US Government) will be looking the sell shares as the price moves up over $8.68. 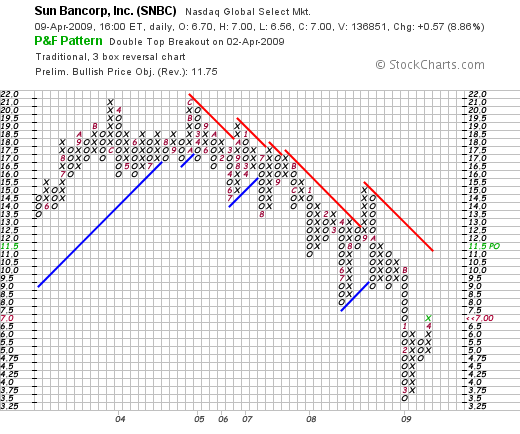 Wow.  The story sounds great, but the chart looks terrible.   This is a stock that is stuck in a long term negative trend.  And that trend will not change until the stock can break through that red overhead resistance line.  That line is currently sitting at $11, a long way from $7.00.  And in between $7 and $11, there is a significant amount of stock that will be for sale starting as soon as the stock moves beyond $8.68.  This is a good example how we have to “marry” fundamental work with technical work.  The fundamental story sounds compelling.  The technical story looks ugly.

Good for Sun Bancorp, but I’d rather find somewhere else to put money to work.