Is the 4% Rule Right for Your Retirement? 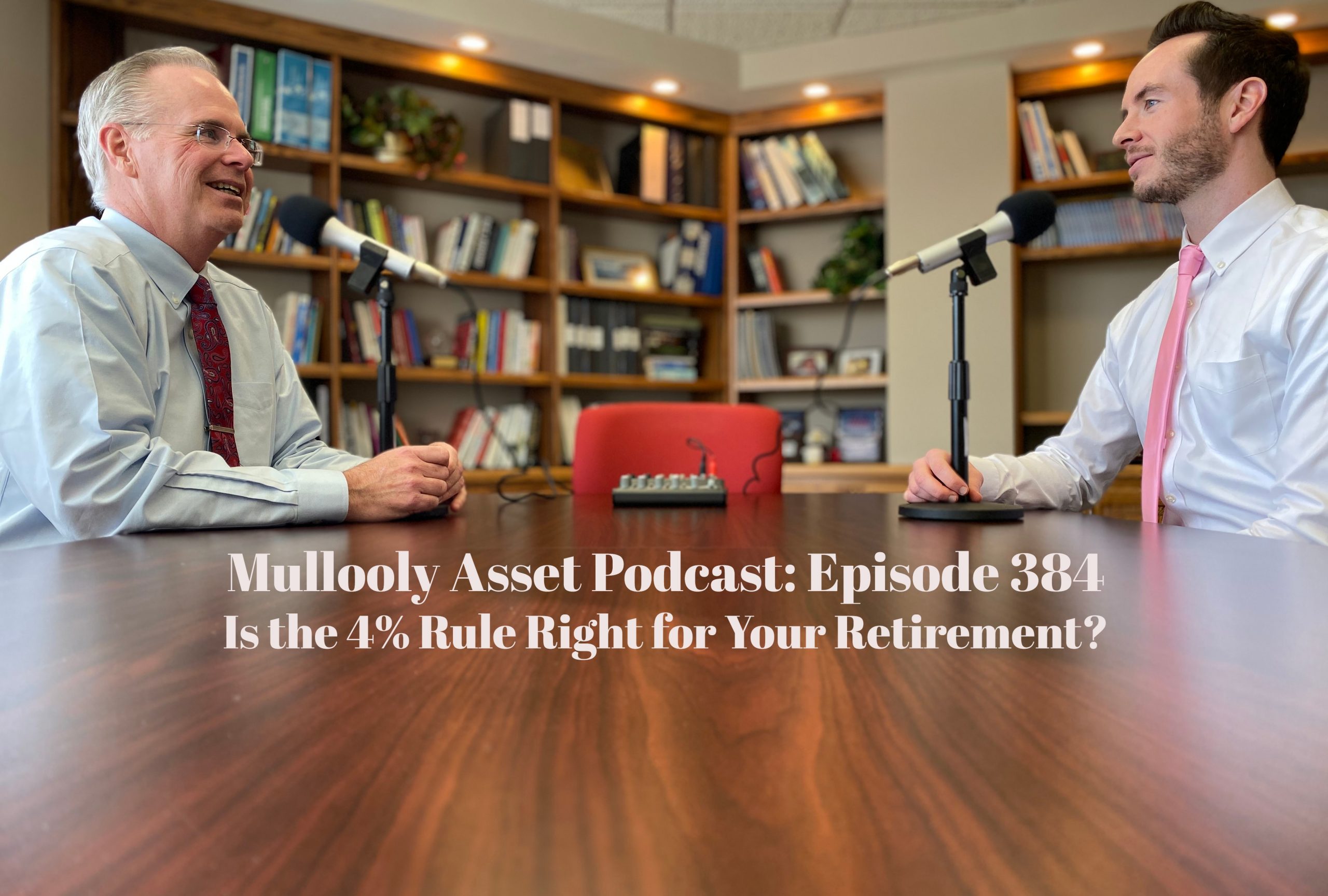 In this week’s podcast, Casey and Brendan further their discussion on retirement withdrawal strategies. They discuss a recent piece of research that indicates the 4% rule for retirement might be out of date.

Tune in to find out how stock market valuations affect retirement plans and what retirees can do if they have to withdraw less from their portfolios.

Catch up on our episode from last week! – Withdrawing Money for Retirement

The 4% Retirement Rule is in Doubt. Will Your Nest Egg Last? – The Wall Street Journal

Is the 4% Rule Right for Your Retirement? – Full Transcript

Casey Mullooly: We got on this topic because of a recent article from the Wall Street Journal, talking about a long standing rule of retirement, that being the 4% rule, which the article, the headline was the 4% Rule is Getting a Haircut.

The article was based on a recent study from Morningstar that suggested that the 4% rule is out of date, and that the new number is 3.3%. So the 4% rule has been a rule of thumb for retirees. The rule says that you should take no more than 4% of your portfolio’s value in the first year of retirement.

And then moving forward, you use that 4% number and you take that withdrawal rate and you adjust it for inflation each year, and you should be good to go and not run out of money in retirement.

Casey Mullooly: So the new report from Morningstar suggests that retirees should take no more than 3.3% of their portfolio value in the first year. The study was assuming a 30 year retirement and someone with a 50/50 portfolio, so 50% of their portfolio in stocks, 50% in bonds.

So if someone were to have a $1 million portfolio, with 3.3% rule, they would withdraw $33,000 in their first year, as opposed to 4% would be $40,000. The Morningstar study was largely based on expected returns and how they’re going to be lower moving forward than they have been over the last 20 or 30 years.

And at least the Wall Street Journal article, the ones that they threw out was the PE ratio. We’ve talked about that before, how just because it’s high or above average doesn’t mean necessarily that stocks have to fall in order for that to adjust.

Brendan Mullooly: Right. I think the thing with that though, is people mock the returns will be lower going forward thing because people have been saying that using things like PE or other ratios for a long time, and it hasn’t necessarily happened over the short term.

We’ve had a ton of years since the financial crisis, basically where we’ve compounded now at 15 or 20% on stocks for a decade. But it depends on where you’re starting from. The last time PEs were totally out of whack was ’99, 2000. If you use that as a starting date from then through today, we have compounded at something like 8 or 9%, which is on the low … I don’t know.

Brendan Mullooly: Okay. But the returns meaning. People will say, “Returns haven’t been lower. We made 20% last year.” It’s like, well, you can simultaneously make a lot of money in one year, but still be below trend depending on where you’re measuring from.

So if you’re measuring from the last time the PEs were out of whack like this, yeah, returns were lower on a go forward basis from 2000. In fact, the 10 year compounded growth rate from 2000 and 2010 was like 1% annual per year. I think that’s this a sort of thing you’re trying to at least consider when you’re thinking about returns might be lower on a go forward basis.

Brendan Mullooly: I think it gets conflated, because over the super long term, like a 30 year retirement, I’d argue that starting valuations don’t matter a ton because over 20 or 30 or 40 years, will probably compound at something close to the historical averages, whether we’re starting at a high point or a low point for PE ratio.

So the super long term probably takes care of itself. The short term is shrug emoji. Anybody’s guess because it’s just a one year period. I think what PEs are trying to tell us pertains to an intermediate term period, and I think that because of that, sometimes it gets chalked up to this stuff doesn’t matter. I think that it does matter.

I think that it is important to consider that. I mostly buy into their idea of PEs are high, starting yields on bonds are low. Our expectations should be set accordingly.

Casey Mullooly: It goes in with what we talk about too, where I know we’ve talked about it sometimes, where we would rather assume lower returns moving forward because that builds in that margin of safety into the plans.

Brendan Mullooly: Yeah. But also you let that guide the process of the portfolio too, how much risk needs to be taken, how much risk do we need to accept for the plan to work? I think that super low yields on bonds, high valuations on stocks, you have to consider both of those, so on one hand you don’t want to have too much in bonds because they’re not really yielding anything.

On the other hand, if stock valuations are super high, you can’t be 100% in those either to just try to get a higher distribution rate maybe because you think that, all else equal, more money in stocks should throw off more money. Meaning you can draw a higher percentage of the portfolio because you need to have some money in bonds to help with distributions over the years too.

Whereas you might be led to believe the more money in stocks, the higher probability of success, but that caps out at a certain point when you’re looking at it. For a lot of retirees, if you’re taking distributions from a portfolio, there’s not a big incremental benefit past 70% or so in stocks, because when you’re taking distributions from the portfolio, you could actually be at a disadvantage by having more than that in stocks, because you’re pulling directly from the market.

And if you’re taking distributions and the portfolio’s down, you’re worse off than somebody who was 70/30 or 80/20 and can pull from the bonds in the portfolio that aren’t down.

Casey Mullooly: Right. So it just reaches a point where there’s too much stress on the portfolio. And then that causes you to be reactionary instead of proactive.

Brendan Mullooly: It might be interesting. We’re at this point in time where they’re talking about PE ratios and interest rates where they are, and then considering that, and then the impact it’ll have on withdrawal rates in retirement.

Wouldn’t it be great to know the reverse of that? Meaning that we were at a point in time where the 4% rule could grow out its hair, instead of getting a haircut, so to speak.

So end of 2008, beginning of 2009, I guess you had to take the downturn to get there, but your go forward returns on the stock side of your portfolio probably looked awesomeat that point in time. So your distribution rate could have maybe been higher than 4% from there forward, which is pretty counterintuitive because you were-

Casey Mullooly: Yeah, no one was thinking that at that time.

Brendan Mullooly: … probably super upset at that point in time, considering the way the market had performed for about a year.

Casey Mullooly: Yeah. Investor psychology at that point was just like, hold on to what you have.

Brendan Mullooly: Yeah, people were looking to pull the plug, as opposed to, if anything I would say, obviously with the benefit of hindsight that if you were in your 50/50 portfolio, then going to like 60/40 or 70/30, would have been a really wise move.

Casey Mullooly: That was a point that I think Christine Benz from Morningstar was quoted in an article, as saying that the worst time to retire is when valuations go forward, valuations are highest.

Brendan Mullooly: Your account balance is probably the highest it’s ever been when those conditions are occurring. But yeah, also on a go forward basis from there, maybe the expectations for returns should be lower considering the good run that you’re coming off of and the cyclical nature of markets.

Casey Mullooly: It’s definitely counterintuitive, and that’s something that we talk about all the time with sequence of return risk. I think that the timing of when you’re getting the returns, once you hit retirement, it’s a sequence of returns on your investments from that point forward really does affect the plan, and definitely has an impact on things like withdrawal rates and just how much you can be pulling off of the plan moving forward.

Brendan Mullooly: Right. So let’s say for simplicity sake, you have a 20 year retirement and you compound at 10% a year, but you take a path where the first 10 years are really good, and the second 10 years are really bad for market returns. You could average the same exact returns over a reversed 20 year period.

You’re probably tracking above trend in terms of what expectations were at retirement. And then, sure, the bad market in the second decade is no fun. It never is. But you’re in such good shape from having done well beforehand that you end up okay.

Brendan Mullooly: Whereas if you don’t survive the bad decade in the reverse scenario, then maybe you don’t get to reap as much of the reward of the good decade because not only were you in a bad market before that, but you were withdrawing through that bad market.

Brendan Mullooly: Especially if you’re not adjusting along the way on that withdrawal rate, because it talks about in the article, whereas if you’re taking 4% from a million dollar portfolio and then your portfolio declines to 750,000, I think that 4% then becomes in between 6 and 7%.

Casey Mullooly: Sure. Things get things get messy quick.

Casey Mullooly: Yeah. And that’s when things … You do a couple years of that and then the market’s still sluggish and you’re going to be in some trouble, like you said. Yeah. I think some of the ways that retirees could combat this, if they do want to do a withdrawal rate over 3.3%, I mean you’ve got to factor, $33,000 doesn’t sound like a lot if you have a million dollar portfolio. You’ve got to factor in other things like pension income, social security.

Brendan Mullooly: It’s situational. And that may be plenty of money for some and not enough for others. Also too, something we talk about with distribution rates in retirement is, as you just said, we’ve got these other sources that might make contextually that distribution rate okay or not okay for somebody’s situation.

I think you have to consider too, if somebody is opting for a higher distribution rate, meaning let’s say instead of their 3.3 or their 4, they’re specifically choosing based on their circumstances to start off at five or five and a half percent. They’re doing that because they’re delaying on something like social security or a pension that’s going to kick in in a couple of years.

So it may be a temporarily high distribution rate, which might be okay. You can’t just blanket say … And that’s what this is. It’s a rule of thumb. So it’s a great place to start from. But depending on who we’re talking-

Casey Mullooly: You can’t just look at it in a vacuum.

Brendan Mullooly: Yeah. Right. Exactly. You have to consider the reasons a distribution rate might be higher than that. If you’re temporarily doing it so you can delay on social security until age 70, that might be better over the course of a 30 year retirement than starting social security at the onset so that you’re hitting an arbitrary rule of thumb number, like 3.3 or 4% on the distribution rate.