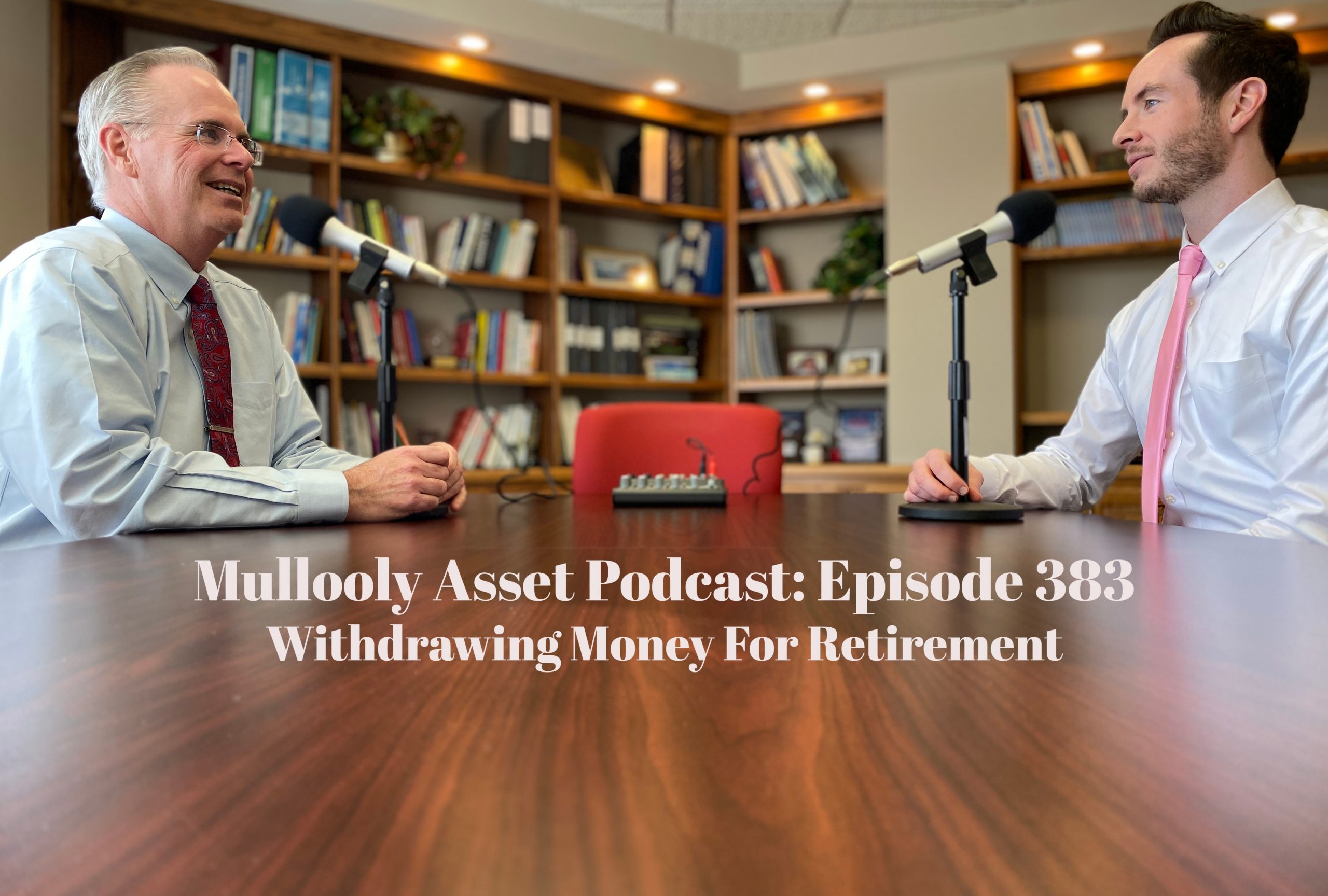 In this week’s podcast, Brendan and Casey discuss retirement withdrawal strategies. They highlight the different levers that can be pulled. And how making adjustments to spending can have a larger impact on “success rates” than portfolio changes.

This podcast drives home our point that financial planning is a process and not a one time event.

If you are on the cusp of, or even thinking about retirement, you won’t want to miss this episode.

Wanting to make a change to your monthly expenses to better set yourself up for retirement? Check out this recent blog post!

**For a downloadable PDF of this transcript, click here!**

Casey Mullooly: Instead of adjusting for portfolio risk, adjust for things like spending, we actually kind of control-

It’s going to be an income change. Meaning like, could we bring in more income somehow from working more, is Social Security going to kick in at some point? Or can we change the spend side to the equation to lower the heat on the portfolio.

Casey Mullooly: It really is just like a tight rope. Of course you want a 100% plan success rate, but in order to do that, you’re probably going to have to tighten things up on the spending side of the equation.

And that might mean money’s left over and money goes unspent. So that’s not really an ideal outcome, but some people on the other hand, people might feel uncomfortable with the success rate, not being 100.

Casey Mullooly: But that might mean that if they are comfortable with that, then the risk they’re taking is they run out of money at some point.

Casey Mullooly: So it’s really all about threading that needle.

Brendan Mullooly: Well, I think that probability of success, it needs to be reframed from something that like it’s not a test score. Like, if you’re taking a quiz back in school, you want a 100% obviously.

You’re just talking about the odds that you will need to make an adjustment. And so I think that’s very nebulous, that’s super open ended. So like talking more with clients about what an adjustment might be in terms of getting back on track.

Brendan Mullooly: If you’re starting from a place where your probability of success is 50%. It’s like in the frame of a test score, that’s a failing grade. In terms of this, it’s like, all right, there’s a 50% chance that the trajectory we’re on is fine and we don’t need to do anything.

And then the other 50% we have to make a change and so what might that mean? What does that mean? Like how much would we have to cut spending to get back on track?

Casey Mullooly: Yeah, I think even the framing of the planned success rate, it’s not a pass fail to use the test analogy.

Casey Mullooly: It’s like a sliding scale. But when you say that you don’t have 100% success rate the mind automatically just conflates that with failure.

Brendan Mullooly: Yeah, how do we fix this?

Brendan Mullooly: I want it to be a 100%. And, but like you said, being at a 100% or 99% as close as you can get to it. It might mean that you’re living so conservatively that you end up in a scenario where there are millions left in the bank, when the plan has concluded.

Brendan Mullooly: And right, like you said, maybe that is part of the plan for some people, that want to leave money to charity, to their children, grandchildren, et cetera. But for a lot of folks, they specifically tell us that that is not part of what they want to do.

Brendan Mullooly: They obviously they want to live comfortably. They want to make sure that they don’t run out, but they don’t want to be on their deathbed with millions of dollars in the bank. Because to them, I think they’ve connected that idea that that money in the bank is just like things they could have done or memories they could have made with family and like that.

I think that when you think about the money, that way, it would be unfortunate to have to plan culminate with that money still there on spend, it’s basically opportunity to do things you care about just unused.

Casey Mullooly: I think that’s why the, [crosstalk 00:03:53] idea of having, and this was from an idea from the article on the Kitsis website was having clients prioritize, which areas of spending they care about the most, or which areas of spending they can’t afford to cut back on. I think we talked about, and this might have been an example from the article, where they’re talking about, they use travel as one of those areas, for example.

Casey Mullooly: And I guess the context of that travel is what’s important. You could have that travel, be your annual visit to see your grandchildren, something that’s super important, or it could be, a frivolous trip to Mexico just for fun.

Brendan Mullooly: You can just assume, you can’t just say, oh, travel, that’s part of the discretionary spending, we would definitely cut that. I think it helps to work with clients to understand these budget items and which ones are a priority to them. So yeah and you can rank them.

Brendan Mullooly: You can say which of these expenses are more or less negotiable and come up with a scale of how to rate those, which was in the Kitsis article. And then say, all right, well, based on that, if you needed to make an adjustment to your plan, because we were getting off course, it looks like you’d have the ability to walk your income back from this, to around here.

What would that do in terms of just like flushing out? Like, “Hey, if we need to make an adjustment, how capable are you of doing that?”

Brendan Mullooly: And would that fix the problem? Would that resolve it or would that improve the situation and how much. And again, these are all educated guesses, but taking that concept of percentage where the plan doesn’t work and at least just walking through hypothetically, what that might look like, I think can be helpful for some people.

Casey Mullooly: Especially if it’s someone who wants a high success rate, but wants to live their life and spend their money. I think identifying those strings, you can pull ahead of time in those areas you can cut back on if needed. That could be a way to give them more peace of mind with a success number that isn’t 100%. And having that plan in place and being like, okay, if this happens, then we cut, boom, boom, boom and then we’re back on track.

Casey Mullooly: So I think that that is a really good idea. And the whole idea behind getting these success rates is to give the clients conviction that they’re going to be able to reach their goals.

Whether that is like we talked about to donate to money down the road, if they have more leftover, give it to their kids or spend it all and enjoy their life while they still can. I think it’s all about just giving them that confidence and that conviction, that they’re going to be able to live the life that they want to live.

Brendan Mullooly: Do what they want when they want to do it.

Casey Mullooly: Right. I wanted to get your opinion on one of the ideas that they talked about, I guess it’s known as the guardrail strategy referring to distributions from your investment account and withdrawal rates. And the idea is that it depends on market returns.

To simplify in years where the market returns are above expectations. You pull more money out of your investment account and you can spend more money. But in years that the market performs poorly the next year, you would cut back on spending.

I think one of the suggestions from the article was when, if your withdrawal rate gets above 5%, the next year you take a $10,000 pay cut from your portfolio. That way you’re kind of, as the name suggests you have guardrails within your strategy.

Brendan Mullooly: Yeah, you can set a rule based system with parameters, like what you just specified to come up with something that adjusts for the sequence of returns, that you are actually experiencing once you’re in retirement.

And I think it’s doable, but the person who’s opting into this needs to go in with eyes open. Meaning like they need to have a good grasp on their cash flow and need to be willing to do those sort of things. Like cut different spending categories, things like that in retirement.

Brendan Mullooly: Some people just flat out aren’t interested in that and they want to know what’s coming in month after month. It depends, it’d be a good fit for certain personalities, but other people it’s too much in terms of work to figure out-

Brendan Mullooly: What rules are going to be a match. And it is kind of stressful to not know each year what’s coming in. But for the right kind of person, I think it can be very valuable and it’s definitely doable.

Casey Mullooly: Yeah, everyone’s situation is different. And that you have to spend the time and do the work and get the right context and deal, I know when we’re having these conversations with clients, it’s important that, and we listen to what they want to do with their money and what their lifestyle is going to be like in retirement and what their goals are.

Casey Mullooly: So rules of thumb are great as a starting point, but the work is done fleshing out the details and doing these situations in a one on one and-

Brendan Mullooly: Updating over time too.

Brendan Mullooly: And not something that you can set and forget. I mean, you can start out on a course and then you’ve got to monitor it and then make adjustments as needed. But it’s-

Casey Mullooly: And adjustments are not a failure.

Brendan Mullooly: That is correct.

Casey Mullooly: We just want to clarify that. Just because you got to adjust, it doesn’t mean that, you are wrong. It just means that things change, which they do.