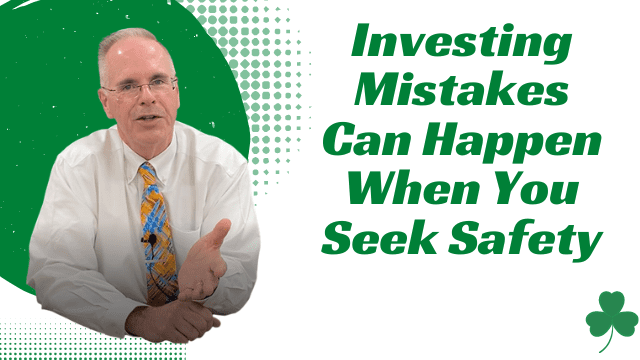 The biggest risk when investing for retirement isn’t stock market volatility. It’s being too safe with your long-term money.

In this week’s video, Tom talks about how mistakes can happens when folks want short-term certainty with their long-term dollars.

Check out this week’s video so you don’t make the same mistake!

Where Should You Put Short-term Money?

Investing Mistakes Can Happen When You Seek Safety – Full Transcript

Tom Mullooly: In episode 310, we talk about mistakes people sometimes make just because they want to be safe. Stick around.

Welcome to the Mullooly Asset Show. I’m your host, Tom Mullooly, and this is episode number 310. Every time I think of the number 310, I think of that movie, 3:10 to Yuma. Have you seen it? You may want to if you’re worried about your investments or worried about the stock market or you’re panicky about what’s going on right now.

The problem really is when you get short-term headlines or short-term volatility in the stock market, it gets people scared. We hear it, we’ve heard it every day this year. People are nervous, people are worried, and they’re right to feel that way. So we don’t want to see clients in a position where they become what we call in the business a forced seller. Someone who’s got a margin call, they’re a forced seller. Someone who has to sell because they’ve got some kind of liquidity issue, they’re a forced seller.

When someone decides when they made up their mind that they want to cash out their investments or their retirement account and move to the sidelines, they have identified themselves as a forced seller. We don’t want people to be doing that. It’s a panic move. So when we’re in markets like we’ve had this year, we understand people want security, they want certainty.

And right now it’s very hard to be certain about too many things because the market’s bringing so much volatility. We get it and we want you to understand that this is part of the mix as well. This is how we get very good long-term returns because we have to live with some of this volatility from time to time. But by getting out of long-term growth investments for something short term and secure and may be guaranteed, you’re really giving up all the long-term returns.

So we’ve had this year, a couple of folks call us because they work for a government agency and they’ve got a 457 retirement plan. This is important. A lot of folks don’t understand this. A 457 plan looks a lot like a 401(k) plan, but there’s a huge difference in these plans.

When these folks retire and a lot of them can work 20 years and they can retire, they may be retiring at 46, 48, 52 years old. The difference with their plan is with a 457 plan, they can start drawing on that retirement money the day they retire at age 49. And yes, it’s going to be taxable income, but they don’t have that 10% penalty that you and I would have with a 401(k) or even an IRA. It’s a pretty big advantage.

And so we’ve seen a lot of annuity sales this year. People are preying on other people’s fears, and so they’re offering them guarantees to flip their money from their retirement plan at work into an annuity where they may get 3% or 4% or some kind of guarantee that comes with it. What we’re seeing is money is coming out of 457 plans and going into IRAs.

If you are in a situation where you’ve got money long term and you’re in your 40s or even in your 50s, this is money that needs to last for 25, 30, 35 years or more. And so we need to remember when we’re investing for the long term, there will be some volatility. It happens. It comes with the territory.

It’s very important to keep aware of that. So I started the video by talking about 3:10 to Yuma. Check it out. This is a story. It was a great book by Elmore Leonard. They turned it into a very popular movie 50 years ago. They remade it recently with Russell Crowe and Christian Bale not that long ago. But it’s basically the story of a guy who falls behind, starts having money problems and makes one panicky decision after another. Don’t let that be you when it comes to your investments. 3:10 to Yuma. Thanks for tuning in.