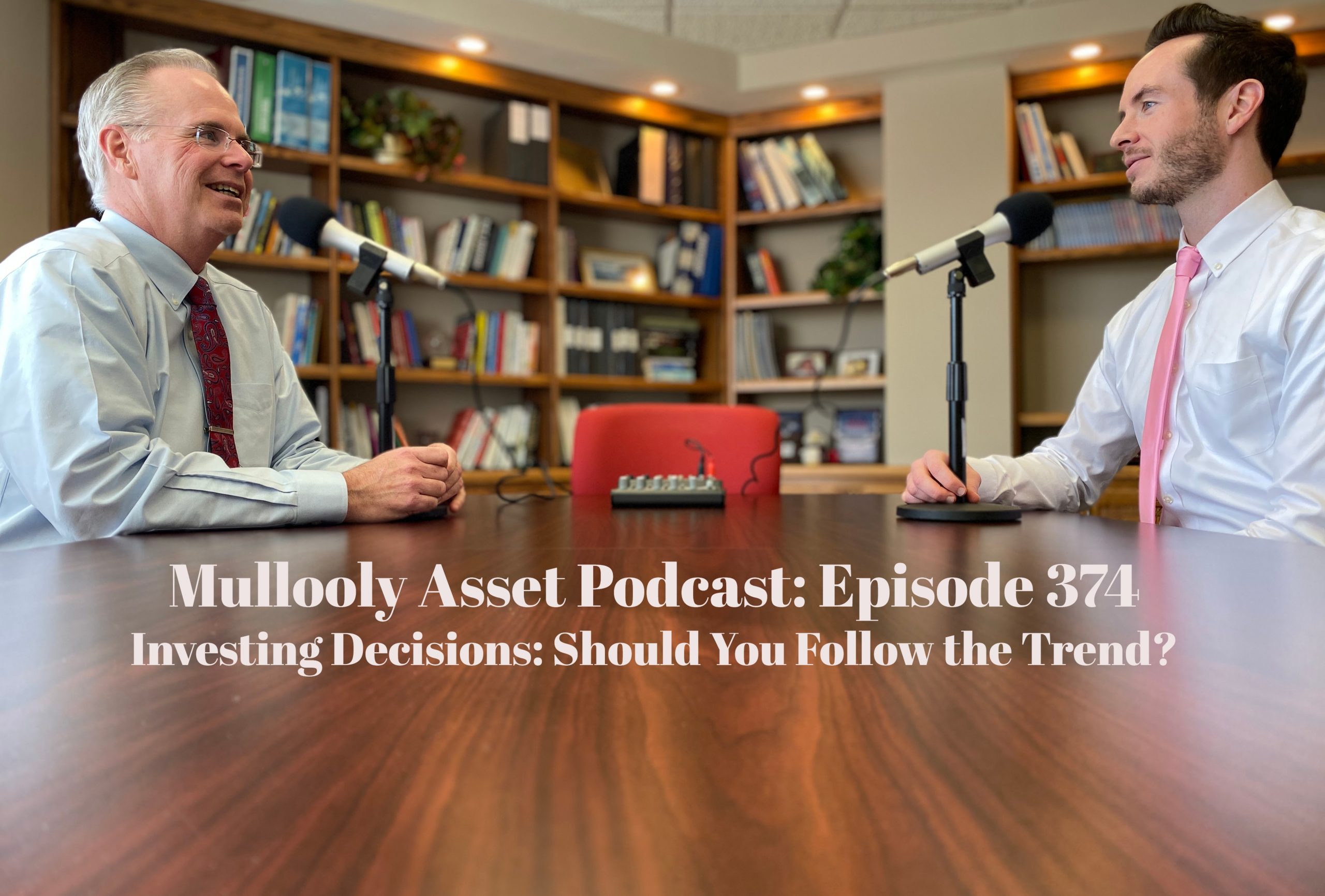 In this week’s podcast episode, the guys discuss making investing decisions and why following the latest and greatest trends might not be the best strategy.

They cover everything from historical market context over the last twenty years, to how to construct a portfolio with a client’s best interest in mind.

Be sure to tune into this one!

To Be a Good Investor, You Have to Be a Good Loser – Morningstar Podcast with Meb Faber

Investing Decisions: Should You Follow the Trend? – Full Transcript

Casey Mullooly: Welcome back to the Mullooly Asset podcast. This is your host, Casey Mullooly, and this is episode 374. This week I’m joined again by Tom and Brendan, and we get into our thought process and some things we consider when we’re constructing portfolios for clients. So there’s a lot of good takeaways in this short episode. We hope you enjoy it.

Tom Mullooly: So I listened to the Morningstar podcast that Jeff Patek does with Christina Benz, and they had Meb Faber.

Tom Mullooly: I actually retweeted it last night because it was so good. We should share that. A lot of what we do aligns with the work that he does. I just think he has a lot of good things to say and things that we need to be mindful of as we’re building portfolios for clients.

Casey Mullooly: It’s interesting drawing that line between textbook and just the theory behind the investing and then what we need to do for people. All the research would say, oh, yeah, this should work. This is the right thing to do, but then it doesn’t really translate.

Tom Mullooly: I think the problem is recognizing when there’s a change in trend. So several times during the podcast, Meb mentioned how we had a decade of zero returns from the S&P from 2000 through 2009. But the problem with that is you don’t know until you get to 2009 what the results look like going back over the next 10 years, because we had years like 2003, gangbusters.

Brendan Mullooly: But also, so you have that decade where people started to do things and everybody wanted to do trend following after 2000 to 2010, because it was good then. And now nobody wants to do it anymore. At best, it can be a component of the portfolio. So, how do you do trend following to find out when the trend is to use trend following?

Casey Mullooly: I was just going to say that.

Casey Mullooly: So what you’re saying is-

Tom Mullooly: We need the, what’s the sports book from Back to the Future?

Tom Mullooly: That’s what we need.

Brendan Mullooly: I’m just saying I think that you can build them into a portfolio, but you can hedge different things different ways. Trend following isn’t perfect. I think people who like it think that it is perfect. And I think a better hedge is just owning less of the risky stuff and having some bonds, which was the only way to hedge the …

Let’s talk about the last two 20% draw downs, meaning the end of 2018 and the one from 2020. The only way to hedge those was having high quality, short term bonds because everything happened too fast. There were no trend following signals that got you out ahead of those. They do not exist.

Tom Mullooly: Thanks for bringing that up because that’s something else that I think gets glossed over or really hasn’t even been mentioned. But we mentioned this on a podcast, Casey. It seems to me that over the years, as some kind of crisis hits the market, a pandemic, banking crisis, whatever, we have Congress and the Fed stepping in and moving the goalposts, changing the rules.

So all of these economists and market historians look at this and say, “Okay, well this is happening, so this should do well.” Well, no, wait a minute. The Fed came in and brought rates to zero and now they’re buying bonds at a rate of 150 bazillion dollars a month. So, things change. So we get these down 35% in February and March of last year and we get an immediate snap back because the Fed has come in and changed things.

Brendan Mullooly: It’s probably for the best though. I wouldn’t want to see a prolonged downturn just so we could say that trend following worked. That’s not good.

Brendan Mullooly: So because the same people will cry that the Fed changed the rules when they can’t buy their distressed debt or value stocks because they never washed out enough. So you can lump in trend followers in tears for the same reason. It’s like the Fed ruined the playbook. Well, I just think you have to understand when you do trend following, I think you’re hedging the prolonged downturn.

So if you know that, then you have to expect that in the portfolio and you have to expect that to hedge against the prolonged downturn, the premium is getting whipsawed out of the market and underperforming for a decade when there isn’t one. And if you aren’t willing to be different and to be behind the market because you’re doing something like that, then you shouldn’t do it, because it’s not an alpha strategy. It only looks like one right after you get … Right after ’08, ’09, it was like, wow, you can outperform with lower volatility by doing trend following. And I’m not sure I would expect to outperform.

Brendan Mullooly: I think you can lower the volatility, which is also going to lower the expected return, which means you’re going to lag, especially at a bull market. I just think that sometimes people who are into it tout it as the cure all, like you can just-

Casey Mullooly: Yeah. So I guess that that’s the takeaway is that there are no permanent signals.

Casey Mullooly: That’s just, if this, do that, because things change over time. So the things that tell us when things happen are going to have to change and evolve over time as well.

Tom Mullooly: One thing that I also took away from the podcast was we’ve always seemed to have had an over dependence here in the US on US stocks and US large cap in particular, and to the detriment, I think of, if you were just an S&P investor for that period from 2000 to 2009, you had several years where you took it on the chin.

But at the very same time, there were emerging markets and foreign markets that did well, I mean, relatively speaking. And I think a lot of investors in the United States just don’t even consider investing outside our borders, and I think that’s probably a fault. You and I have shared notes on some of these things where, hey, look at emerging markets. They’ve done just as well at different periods over the years.

Casey Mullooly: I wonder if that’s specific to just the United States or to everyone’s home country.

Tom Mullooly: Well, the point he brought up, he was like, “Hey, if you’re Canadian and you want to have your home bias, then you’re buying the junior miner stocks and cannabis stocks.” I don’t know if that’s really a good barbell, as he put it.

Brendan Mullooly: The US is definitely different than some of these other nations. I think everybody does display the bias from what I’ve seen, but the US is such a mature and developed market that you can get exposure to virtually every industry without having to invest outside the US.

Tom Mullooly: You were wrong.

Casey Mullooly: It’s been the exact opposite.

Brendan Mullooly: … it’s been the exact opposite.

Brendan Mullooly: But over the 20 year period, if you owned all of those things, you’ve probably taken a smoother path to get to the exact same place, which is the reason we do all of that.

But it’s maddening in between. I’m not going to dispute that it stinks, that when you have things in your portfolio that aren’t keeping up, or are being a detriment to returns, that stinks. I don’t like it either, but it’s just part of what it comes with, because absent the timing signal that tells you when to flip from one to the other, all in, all out, then I don’t know what else you’re really supposed to do.

Casey Mullooly: Is it the guys at Alpha Architect that say no pain, no premium?

Brendan Mullooly: Yeah, I believe it is.

Brendan Mullooly: And I think that is very true.

Casey Mullooly: That’s going to wrap up the Mullooly asset podcast, episode 374. We hope you gleaned some good insights about our thought process when we’re making investing decisions and the different things that we’re thinking about. Thanks as always for listening, and we’ll see you on episode 375.