If you were given you a map to get to a destination, would you follow it?
In our world, the “destination” would often be retirement, or paying for college.

According to Morningstar, the total return for the Vanguard 500 Index Fund Investor Shares (symbol VFINX, otherwise known as “the S&P 500 index”) for the past ten years, has been 10.04% per year.

If you were investing at that time (summer 2008), things were “just about” to get interesting in the coming weeks. But you didn’t know anything about that. All we could talk about at that time was whether you were going to see “The Dark Knight” on Friday night or Saturday night (released July 14, 2008). And you kept humming that #1 song from Coldplay in your head (you still do – admit it, Viva La Vida IS a catchy tune!).

So if you invested in “the market” (the S&P 500) in July 2008 — and simply left it alone, you could have scored 10.04% on average per year since then.  Which all sounds pretty good. In fact, it’s probably better than a LOT of ten-year periods of time in history.

Stop and think about that.
The ink barely dried on the confirmation of your investment in July 2008, and we go through a historic stock market meltdown of epic proportions over the next four months.

If you were given you a map to get to a destination, even with the market dropping (and it seemed like it dropped every day at that time) would you follow the map to your destination? A lot of people pulled some funds out, or sold the whole thing, or promised themselves to get back in (later).
Some did, some did not. Some did not put all the money back.

And some never came back at all.

Would you deviate from the map (the plan)?  And yet, with all the tumult we’ve seen in the last ten years, the S&P 500 still posted very solid returns.

Whats more, since 2008, we have had many more opportunities to rip up our map.
These all seemed like very serious crises at the time they were unfolding:

2010: fears of a double-dip recession, flash-crash 1000 points on May 6th.
2011: fears of worldwide economic contagion, downgrade of US debt, stocks down 19% at one point.
2012: fiscal cliff, Greece threatens the future of the euro.
2013: Apple drops, taper tantrum in May.
2014: the Ebola crisis, and panic as the Fed begins to wind down Quantitative Easing.
2015: negative interest rates overseas, and only the worst year in US markets since 2008.
2016: more volatility! Jan-Feb slide sends some indices down over 20%.

All reasons for some “investors” to take a detour from their map. Many individuals deviated from their map, straying off their plans at different stops along the way.  And this really matters. 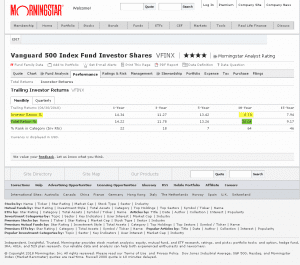 Because you cannot “take a time out.”  See, the ONLY way to actually GET the 10.04% return the Vanguard 500 Index Fund generated during the last ten years was to STAY invested in the fund the entire ten years.
If you deviated, you had a different return. And most often, a smaller return.  Meaning, if you decided you were “going to cash” or “wanted to get defensive” or “planned to get back in, when it was safer” it could really damage your long-term returns.

In fact, Morningstar calculates the average investor earned just 6.78% per year in this very fund over the same ten years.  Not 10.04% the fund actually generated.
http://performance.morningstar.com/fund/performance-return.action?p=investor_returns_page&t=VFINX