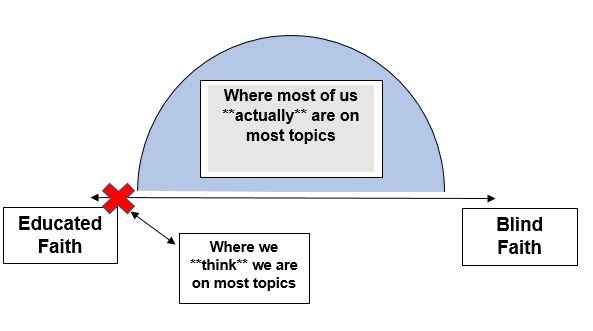 What’s your strongest belief about investing? Did you come to that conclusion independently or do you believe it because other people do too?

Belief formation is a fascinating topic covered extensively in Yuval Noah Harari’s, “Sapiens“. So much of the world we know today was formed through, what Harari dubs, “shared myths”. Shared myths are often the basis for widespread belief systems.

One of the most important shared myths in human history was the adoption of money as a means of exchange. It allowed economies to grow and expand like a barter system never could have. Even more impressively, the adoption of money required no new technology, it was a purely mental revolution. Humans collectively decided that things like shells, gold, silver, and eventually paper had an assigned value.

Why we believe in money today is the same reason people began believing in money when it first appeared: because others also believe in it. Harari describes money as, “the most universal and most efficient system of mutual trust ever devised”. It has value because enough people believe that is has value.

In this sense, believing in something because others do too seems like a perfectly reasonable way to operate. After all, it led to one of the most important developments of all time for humans, so how bad could it be?

The trouble with believing what others believe is that sometimes it fails spectacularly. This sort of logic has led to some of the biggest bubbles in financial history. All bubbles begin with a tiny truth that gets taken too far. Eventually, the original investment thesis gets so warped or forgotten that people are buying an asset simply because others are too. In these instances, believing what others believe is a very unreasonable way to operate.

So which one is it? Should you believe what others believe or is widespread acceptance a red flag? For investors, I’m not so sure either is correct. Blindly following others isn’t a great way to invest, but contrarianism for its own sake is an awful thesis too.

Something more important than being with or against the crowd is putting in the work necessary to have an informed opinion.

Shane Parrish from the Farnam Street Blog notes that:

“The work is the hard part. You have to do the reading. Talk to anyone you can find and listen to their arguments. Think about the key variables. Consider the system. Think about how you might be fooling yourself. Regard an issue not emotionally but rationally.”

Doing the work helps us draw our own conclusions about whether believing what others believe is sensible or not. Something being widely believed does not in itself make that belief right or wrong. Unfortunately, consensus is often viewed in such a binary fashion. Either it’s assumed that no further work needs to be done because everybody agrees the idea is correct or that since everybody agrees, it must automatically be wrong. Additionally, as Dan Egan brilliantly noted earlier this week, regardless of logic and evidence, all beliefs require a degree of faith too.

I believe there are two kinds of faith: educated faith and blind faith.

Those who put in the hard work required to have an informed opinion have educated faith. They’ve done the research, asked the hard questions, considered the opposing side’s arguments, checked their biases, discovered the flaws, and reached their belief. Conversely, those who arbitrarily move with or against the crowd “just because” have blind faith.

I imagine educated faith and blind faith existing on a spectrum, like this:

Our default setting as humans is to believe that we have intelligent, logical, and sensible beliefs (or educated faith). In most cases, we probably haven’t done the requisite work to be that confident. The key is being self-aware enough to realize that, and then strategically deciding which topics warrant deep dives.

When investing, I believe those who do the work to obtain an educated faith will also be more likely to stick to their core beliefs. It won’t be intellectual superiority that sets them apart, but their deeper understanding of what to expect. They’ll recognize the warts that accompany even the best investment strategies, and temper their expectations appropriately. Whether they’re with the crowd, against the crowd, or somewhere in between, their deeper understanding and appropriate expectations will set them up for success.