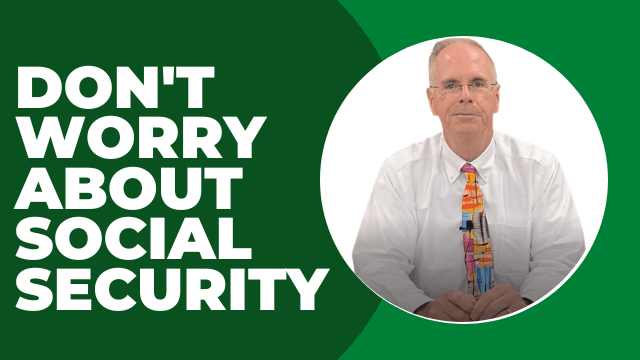 “It’s not going to be around when I need it”

In this week’s video, Tom addresses these worries and discusses how social security is a crucial part of retirement income planning and why retirees should be confident in their benefits.

The Benefits of Delaying Social Security

Tom Mullooly: In episode 305, we’re going to cover some of the fears and worries that folks have about social security. Stick around.

Welcome to the Mullooly Asset show. I’m your host, Tom Mullooly, and this is episode number 305. Thanks for tuning in. We saw this tweet on Twitter today, and we thought this was a good idea to share it. Tommy Sykes, who’s a CFP, put out some information where he said, “Hey, my social security benefit is going to be $2,374 a month. And my wife’s social security benefit will be $1,187 a month.

Combined, that’s $3,561 a month or over 42 grand a year.” And his point was, “Hey, when you’re doing your income planning for retirement, don’t overlook social security.” $42,000 out of the clear blue sky can really help a lot of folks in retirement. And for some people, that don’t have a lot safe for retirement, this is going to be the main source of retirement income.

As you can probably expect, he got roasted on social media. Some of the comments that we saw included it’s a Ponzi scheme, and I’d be lucky if I ever get a nickel from social security, or there won’t be any money left in 30 years when I’m eligible to collect, and the math just isn’t sustainable.

We hear these things all the time. People come into our office or we will meet with them over the phone, we hear the very same things, it’s is going bankrupt. It’s not going bankrupt. One thing that needs to be clarified is they just don’t pick a number out of thin air.

Your benefit is based on the highest 35 years of earnings for you. And so, you can look back, you can create your own social security account, and take a look at the years where what you earned in each of the years to get to the calculation.

What we’re talking about with this is, this is the social security benefit. If there’s a politician out there that wants to talk about making massive changes to social security, he is stepping on a political third rail.

If you remember the third rail from the railroad, don’t touch it, you’re going to be electrocuted and you’ll immediately die. It’s political suicide for any politician that wants to start making massive changes to social security.

And I also want you to think about something else, something else that I’ve pointed out when people start talking about how social security is going bust. We had a virus, the coronavirus, two and a half years ago, and out of magic, thin air, the Federal Reserve and Congress whipped up $7 trillion for a virus.

I really feel very confident, when we talk about what your social security income is going to look like in retirement, and you should too. These comments about social security is a Ponzi scheme, and they’re going bust, and they’re going to be out of money in X number of years. I heard this in the eighties. I heard it through the nineties. We’ve dealt with these questions now for over 30 years. It’s not going away, and that, my friends, is the message for episode 305. Thanks for tuning in.