Don’t Think, It May Only Hurt Your Performance

One of my favorite scenes from the movie “Bull Durham” happens right in the first few minutes. After knocking out the prized bonus-baby pitcher with a punch, Crash (Kevin Costner) says, “I’m Crash Davis, your new catcher. And you just got lesson number one: don’t think. It can only hurt the ball club.” 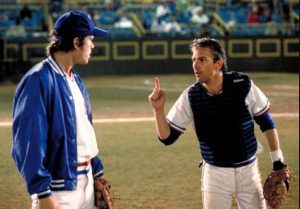 Learning the hard way (with a punch to the face) is a tough — but memorable — way to reinforce a message. But regardless of the risks involved, over-thinking, over-analyzing and second-guessing seem to have become the new National Pastime.

Over-thinking and second-guessing can also hurt investment performance.  Don’t think.  There is little need to over-complicate an investment process, it’s far more important to HAVE a process, and stick with it.

When working with a professional to manage investments, know their reputation is on the line. So, if the “catcher” (advisor) suggests to “add more to bonds” or “we’re adding to small caps” or “we’re going to raise some cash” then trust them, don’t shake them off.

We recently parted ways with a client who (simply put) was not a good fit for our firm. The client (through much over-analyzing) learned a certain fund (which we hold) was up an extraordinary amount. As a result, he requested the ENTIRE account now be placed in this one fund.

As advisers with a serious interest in markets, investing and knowledge of the long run, we’ve seen how returns tend to ebb and flow over time. And we’ve seen how “regression to the mean” can clobber folks who foolishly think the current picture will simply continue forever — just as some folks think trees can grow uninterrupted into the sky. The second-guessers and over-analyzers eventually get their “punch to the face.”

It’s a shame (when it comes to investing) this punch to the face can happen with real dollars.

Like all advisors, periodically we run into folks who seem to enjoy “shaking off the sign from the catcher” and over-think and second-guess the decisions made. We’ve learned some of the second-guessing and over-analyzing may stem from placing too much emphasis on one-year returns for investments. Following this practice of “performance chasing” often brings less-than-stellar results.

Back in early 2015, Ben Carlson of Ritholtz Wealth Management wrote a piece about the danger of following one-year performance numbers. In it, he shares, “you get the sense that the authors are shaming you for not being invested exclusively in only the best performing assets. This myopic view of a single annual period completely misses the point of long-term investing and it’s the reason most people fail when implementing a portfolio strategy.”

Shaking Off The Catcher

The concept of “don’t think, it may only hurt your performance” came screaming back at me like a line drive when I read an article in the Wall Street Journal about Chris Sale, the Red Sox pitcher. The writer pointed out Sale never (never!) shakes off his catcher.  Meaning, Sale simply gets instructed what to pitch next, and then, delivers.  By contrast, most pitchers today shake off their catcher, essentially second-guessing the decision.  Additionally Sale does not attend the pre-game meetings, does not go over scouting reports on the hitters, and does not review video either.

Sale does this intentionally to avoid having his mind flooded with too many thoughts at the precise moment he needs to simply do ONE thing: execute.

This trust in his catcher (and trust in the process) means the catcher does all the pre-game analysis and also sizes up the in-game adjustments. The catcher (or pitching coach) decides what — and where — the pitcher should throw. The pitcher (hopefully) delivers the ball — usually where the catcher wants it. Like investments, it does not work each and every time.  Don’t think: in Chris Sale’s case, this process works very well.

An additional benefit to NOT shaking off your catcher: the pitcher works faster, works more efficiently and the game moves along at a faster pace. Everyone benefits.

A different example (what not to do) is happening now in New York.  Met pitchers constantly shake off their catcher (and coach), and often wind up in trouble. Games seem to go on for an eternity, pitchers often reach their pitch count and need to exit very early from games. There appears to be little trust in the process.

Mets manager Terry Collins commented recently (NY Post May 17, 2017), discussing pitchers second-guessing catchers and coaches. “Pitches are not being made. Sometimes even instructions are not followed in exact form. We’ve had situations where we try to hand out instructions of how to go about things and it’s just got to get executed because I will tell you, Dan (Warthen, pitching coach) has a good game plan,’’ Collins said. “You’ve got to go out and make pitches and they haven’t been making them.’’

On the surface, this appears to be even worse — the pitchers in New York actually HAVE a plan, have a process. But they choose to ignore it or second-guess it.  We’ve seen this happen between advisors and clients as well on the investment management side.  But we have also seen train wrecks on the financial planning side.  Clients are given a plan, yet fail to implement or follow the plan.  Having an advisor put together a strategy or a process, but then not following the process (or over-analyzing, or second-guessing the process) accomplishes nothing.

We also wonder if this situation with Met pitchers might stem from a case of over-confidence.  The Mets and their pitching staff made the playoffs in 2015 and 2016.  Perhaps Met pitchers feel  they do not need help, or do not need a process or plan?   Likewise, some investors may also feel the same way: is over-confidence in their ability to “wing it” about to cause some problems?  For some, the process might become “just own what has worked, because that should continue.”

Like with pitching, over-analyzing, second-guessing — or depending on “what worked last year” — for your investment “process” can lead to poor performance.

They tell pitchers NOT to think, it can only hurt the ball club (and hurt their performance).
We think it is the advisors’ job to tell investors the very same thing.

Don’t think.
It may only hurt your performance.