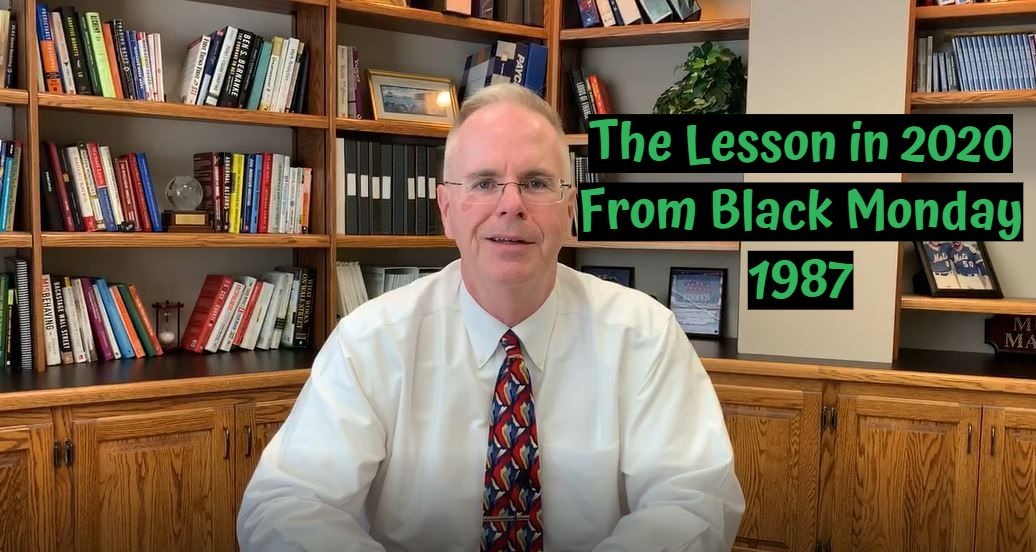 It’s been 33 years since the stock market crash (aka Black Monday) in October of 1987.  33 years could be how long your retirement lasts.  In this week’s video, Tom takes a few lessons away from 1987 and applies it to what we’re going through here in 2020.

‘Terrible Tuesday: How the Stock Market Almost Disintegrated a Day After the Crash’ – James B. Stewart – The Wall Street Journal

Tom Mullooly: In episode 216, we want to address the point that people are really nervous about news events that are happening in 2020. I want to address that by taking a walk down memory lane. You’re definitely going to want to hear this.

Welcome to the Mullooly Asset Show. I’m your host, Tom Mullooly and this is episode number 216. Thanks for tuning in, we’re recording this on October 19th, 2020. That happens to be the 33rd anniversary of the stock market crash on Monday, October 19th, 1987. I was a baby broker, just a couple of years in the business when that happened to come along. A lot happened in a very short period of time.

One of the things that we talk about all the time is if you try and sidestep bad markets in down markets, you’ll usually miss the bounce on the way back up and 1987 was no exception. So let me just capsulize what happened in a couple of days there. The Friday before, Friday, October 16th just like this year was option expiration. The Dow Jones finished down 108 points that day. Now that seems like nothing today, but that was the very first day that the Dow Jones had closed down a 100 points ever.

So the Dow Jones at that time closed at 2246, 2246. Over that weekend, we heard stories about mutual funds getting a lot of redemption requests. And so they had to go in and sell stock. We heard about a lot of margin calls that clients and firms were having. We heard about the treasury secretary Jim Baker was talking about the dollar, we saw the 30-year treasury touched nine and a half percent on its yield. That’s really important.

The long-term return for stocks at that time was around 10%. So why take the risk of being in stocks if you could earn something close to that long-term return by sitting in a treasury bond and holding it to maturity? So a lot of stories going on over that weekend. So fast-forward into Monday, October 19th, 1987, selling right from the get go, market finished down 500 points that day, 508 points. It was down 22 and a half percent in one single day. Think about that.

For that kind of move to happen today, the Dow would have to be down over 6,000 points in one day, big move. So when the market closed that day, it was at 1738. That’s the Dow Jones, not the S&P. I say that because the S&P closed that day at 224. Today, the S&P is at 3400. And the Dow Jones, again, that closed at 1738 is now at 28,400 at the time of this recording. So a lot has happened since then. We’ve had plenty of times where the market has been super volatile. And then there’s other days where the market can lull you to sleep.

The whole idea of letting money compound for you is you got to give it time to work. Now, one of the things that Tim pointed out right before we started recording this is that 1987 to 2020 is 33 years. You may know someone or you may be someone who’s retired for 33 years. So you could have a disaster like a pandemic or a really hotly contested presidential election happen as soon as you retire. It doesn’t have to be a death sentence. Things have a way of working themselves out.

We’re going to link in the show notes to an article that James Stewart, who went on to write a lot of great books. He was working for the Wall Street Journal at the time. We’ll link to his article that came out in November of 1987, that walks through in way more detail what happened those particular days. It’s a great story that you’re definitely going to want to tune into, but the point is, we’ve got a lot going on this year. It’s a volatile year. We’ve had this pandemic at the beginning of the year. We’ve got this presidential election, which is probably not going to be a walk in the park for either candidate. It’s going to be contested.

We’ve got a lot of reasons for the markets to be volatile. Don’t let that be a reason for you to rip up the script. It’s very important. If you go back on a graph, you can’t even find the drop in 1987 anymore. It’s so far away that it doesn’t even register. So take all of this to heart. It’s very important that you stick with the script. Don’t let the news influence how you’re going to invest. And that is the message for episode 216.