Are We Actually Heading Toward a Recession? 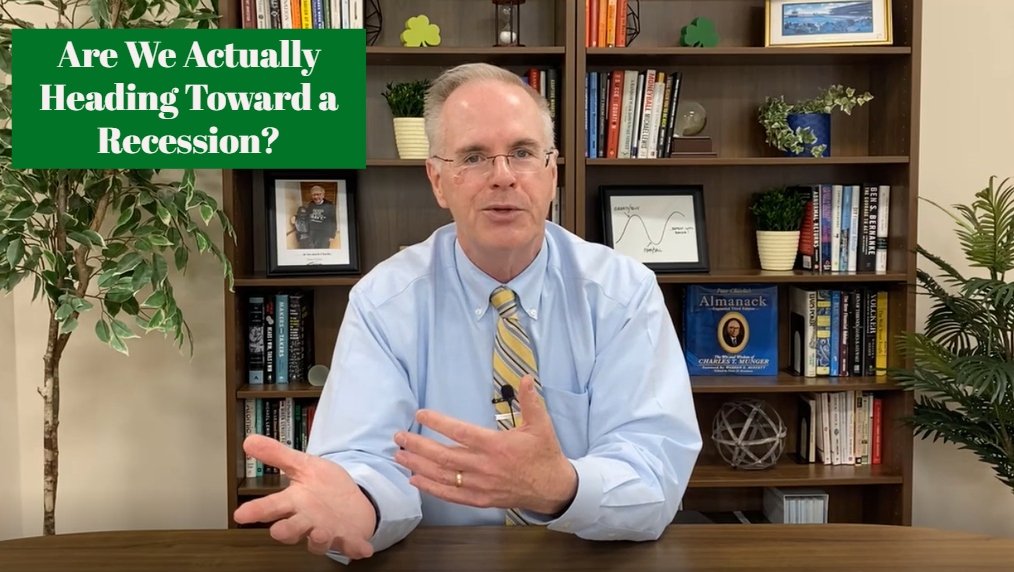 A lot of people are saying that we are heading toward a recession… but is that what’s actually happening?

In times like these it’s crucial to not let our decision making be driven by the latest headlines.

In this week’s video Tom discusses signs in the stock market and economy that are being overlooked. Tune in to hear Tom’s take on the latest!

What Are Inflationary Stocks Telling Us?

Are We Actually Heading Toward a Recession? – Full Transcript

Tom Mullooly: Everyone wants to know when the recession is going to begin. Stick around.

Tom Mullooly: Welcome to the Mullooly Asset Show. I’m your host, Tom Mullooly, and this is episode number 290. Have you watched the other 289 yet?

Tom Mullooly: So everybody wants to know when this next recession is going to begin. I’m here to tell you my opinion only, that we are not going into a recession. However, the stock market is behaving as if the recession will happen on Monday. We’re recording this on Friday morning, May 6th 2022. So as I mentioned, the market’s behaving as if we’re going into a recession, but I want to talk about a couple of things.

On Thursday night, prior to recording this, we were at 4,151. So we’re basically unchanged after all that bouncing around this week. If you hang on the news minute by minute, what’s happening on TV, you will make yourself crazy and you’re going to force yourself into making very bad decisions.

Tom Mullooly: So let’s talk about that. The biggest fear right now is that the U.S. economy is going to go into a recession. So some things I’d like to share with you. Mortgage delinquencies are, they dropped again in the first quarter of 2022. In fact, we saw mortgage delinquencies drop seven quarters now in a row, going back to the lowest levels we saw in 2019.

These sort of things, mortgage delinquencies, these are people falling behind under mortgage payments. This doesn’t happen in a recession. In fact, you could take that same dropping delinquency rate and apply it to all loans, including business loans. People are not crapping out on their promises. They are coming through and paying their bills. This doesn’t happen as we slide into a recession.

Tom Mullooly: People want to know what’s going on with the job market. So we saw job openings and what they call a quit rate. These are people who are walking away voluntarily from their jobs. So job openings and quit rates are not falling, they’re actually increasing.

People voluntarily walking away from work, that doesn’t happen as we’re moving into a recession. And today, we got a jobs report this morning at 8:30, that showed, again, for April, there were 428,000 new jobs created. More than expected and more than forecast. So understand, the economy is expanding, it’s not contracting.

That doesn’t happen when we have sustained inflation. So let’s start putting some of these building blocks together, and we come to the conclusion here, again, our opinion only, that we are not sliding into a recession, but the market is acting, behaving as if we’re going to go into one.

So when the economy expands, earnings do very well. And in fact, we just finished an earning season, and 80% of S&P 500 companies, the largest companies out there, 80% of them beat their earnings forecast. And that’s pretty typical for what we see quarter to quarter. About 80% of companies usually beat their own forecasts.

Now, part of the reason why some of the stocks sold off recently is because these companies also then talked down what’s going to happen next quarter or in future quarters, and that’s just good business. They want to under promise instead of over promising and then having a disaster on their hands.

Tom Mullooly: So we see a lot of good things happening out there. The best equivalent that I can find in my own personal experience was 1994. We had gone through a period of five years where the fed had not raised interest rates.

The beginning of 1994, February, Greenspan says, “Hey, you know what? We finally have to do this to avoid causing inflation and a runaway economy. We want to kind of keep things under control.” So fed funds rate was at 3%.

Tom Mullooly: So we’re going to have periods of time like this, where there’re digestion periods. If you look back at the numbers, the markets were pretty good in 1920 and ’21, despite the pandemic.

We had three solid years without even a 5% pull back. So now we’re getting a pull back, we’re going through a digestion period. We don’t see a recession. We feel pretty good. There’s a lot of green shoots out there. Things starting to happen.

Tom Mullooly: That’s going to wrap up episode 290. As always, if you’ve got questions, reach out, get back in touch with us. We’ll see you for the next episode.