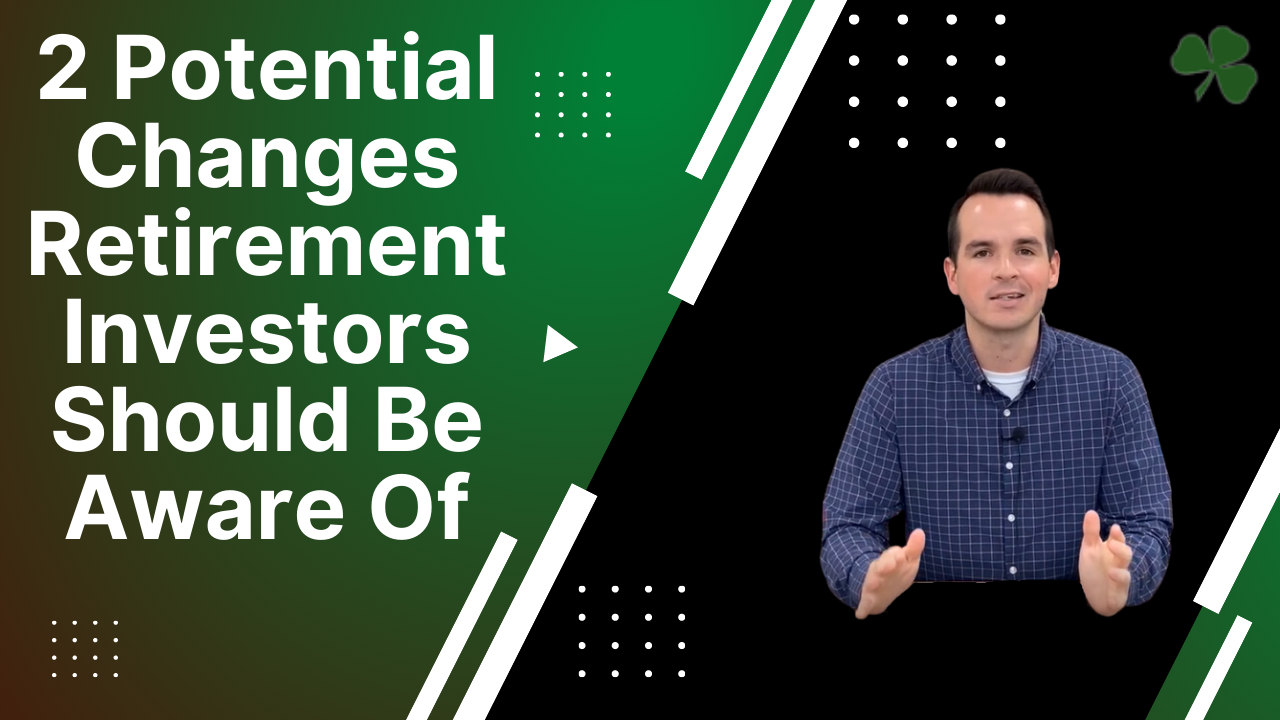 In this week’s video, Casey discusses changes to retirement accounts that **could** happen in the near future. If you save for retirement in a 401(k) or IRA, you’ll want to get these potential changes on your radar.

We could see the age to begin RMDs pushed back and the allowance of certain penalty-free emergency withdrawals.

Tune in to hear our thoughts and when you should start planning for these changes!

How to Start Planning for Retirement

2 Potential Changes Retirement Investors Should be Aware of – Full Transcript

Casey Mullooly:  Changes seem to be coming for retirement investors. Keep watching Episode 298 to find out what they are.

Casey Mullooly: Welcome back to the Mullooly Asset Show. I’m your host, Casey Mullooly, back with you for Episode 298 here this week. We’re going to take a break from the stock market analysis and talk about some potential good news for retirement investors. So we’re recording this here in late June, and the Senate Finance Committee recently passed the bill that has implications for retirement investors.

So if you have a 401(k), 403(b), IRA or another retirement savings vehicle, there could be some changes coming down the pike. Nothing is finalized yet. And there’s two different versions of the bill floating around in Washington, one in the House and one in the Senate with nothing finalized yet. And there’s some differences in the bills. So let’s get into what changes we can expect.

Casey Mullooly: Specifically, we’re talking about RMDs, which are required minimum distributions. If you have a 401(k), IRA, you’re required to take a distribution from that account at a certain age.

Right now, that age is 72, but in both the House and the Senate bill, that age would be increased to 75. Those changes, while the bill might be enacted in the next year or so, that age increase wouldn’t go into effect in either version of the bill until at least 2032. So don’t sweat it. We have plenty of time to plan for that change.

This is a big change for these plans, because right now you can’t take that money out without incurring a penalty until age 59 and a half. Again, that would be a thousand dollars… You would have the ability to withdraw a thousand dollars in case of emergencies.

Casey Mullooly: They’re still ironing out some other details like catch-up contributions, increasing those and some other things. It bears repeating that none of this is finalized, but we just wanted to get it on your radar.

And in terms of the emergency withdrawal provision, yes, it’s great in theory to be able to tap into that money, but we still would rather see folks do a better job of lining up short-term and long-term needs and not put short-term dollars into longer-term assets, like a 401(k). We talk about the need of having an emergency savings account and an emergency cushion at the bank.

Casey Mullooly: It’s especially true now that interest rates are rising and banks are offering more attractive rates on savings accounts, especially in online savings accounts. So keeping money at the bank and keeping that cash cushion is still a good idea, even if these changes get through down in Washington.

So we’ll keep you abreast of any changes that need to be made. So, like I said, just wanted to get this on your radar and take a break from all the stock market analysis. So that’s the message for Episode 298 of the Mullooly Asset Show. Thanks as always for watching, and we’ll see you next week.