What The Martian Can Teach You About Investing 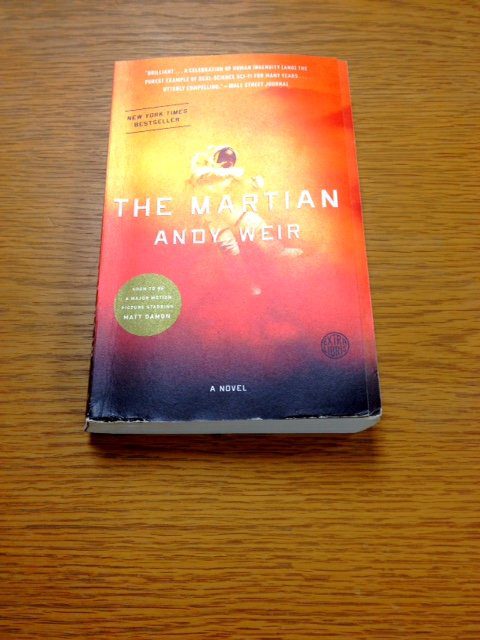 I was a little late to the game, but better late than never, right? I just finished reading Andy Weir’s The Martian. This science fiction novel was recently made into a movie, starring Matt Damon, that will debut in October. If you haven’t seen a commercial yet, check out the trailer here.

After watching the trailer, and seeing a recommendation from Tadas Viskanta of Abnormal Returns, I finally bought it and I’m super glad I did. It’s been described as, “Apollo 13 meets Castaway”, and I found that to be pretty accurate. While I read this for the excitement, as you likely have or will do too, I think there were some lessons in the book that can be applied to investing.

SPOILER ALERT: If you haven’t read The Martian and intend to/or want to be surprised by the movie, I’m going to discuss aspects of the plot, so proceed with caution.

The Martian is based on astronaut Mark Watney being left behind on Mars by his crewmates. They were forced to evacuate during a lethal dust storm, and Watney was impaled by an antenna on their trek to the ascent vehicle. His crewmates were unable to locate him in the storm and presumed him dead. They were all devastated at having to leave Mark behind, and barely make it off Mars themselves. Watney is left by himself on Mars with no way to communicate with NASA.

Being stranded and alone on Mars sounds like a nightmare. For many people, trying to figure out how to begin investing for their future is its own scary proposition. It may not be a matter of life or death, but it does have a large bearing on a person’s future well being. If you’re just starting out, searching for quality, unbiased financial advice can seem like being alone on Mars. Investors who are intimidated by this very situation should take a play from Mark Watney’s book. Rather than let fear immobilize him, Watney calmly constructs a plan for his survival. He works with the information at hand, and logically pieces things together one step at a time.

Early on, Mark Watney decides that he will keep a log of his attempt at survival. He figures somebody will find it one day and learn from it, plus it’s a way to keep himself sane. I think keeping a log is something investors should do too. Aside from following the progress of your investment accounts as they move towards your goals, you should keep a log of how you’re feeling along the way. As we know, the market does not move upward in a linear fashion. Your portfolio is likely to endure its ups and downs along the way too. Describing how you feel over the course of your financial journey can shed light on many interesting details you’d otherwise miss. You’d be surprised at what you can teach yourself if you pay attention. Aside from learning lessons about your behavior, it’ll probably help keep you sane, just like Watney.

So what does Mark Watney do after waking up to find he’s alone on Mars? First things first, he finds out how much food he has. Using a little bit of math, Watney is able to determine his necessary daily caloric intake and how long his current supplies will last him at that rate of consumption.

This isn’t too dissimilar to the first steps that prospective investors should take. A good place to begin is figuring out your monthly number. You can do this by setting aside discretionary extras and determining what your lifestyle costs on a monthly basis. It sounds really simple, but knowing this number is critical. Moving forward without it would be like Mark Watney eating all his food and not worrying about how long it would last him. After you figure out your monthly number, you can create an emergency fund that will cover 3-6 months of expenses. Having this safety net in place is not a choice, it’s a necessity. Knowing your monthly number and having an emergency fund are as crucial to investors as food is to a man stranded on Mars.

Eventually, NASA realizes Watney is alive. They’re able to make contact with him after Mark travels via rover to obtain the abandoned Pathfinder, which was left behind from earlier Mars exploration. NASA devises a plan to bring Mark Watney home, but it’s determined that he’ll have to make it from his crew’s camp to one designated for the next Mars exploration. The catch is that it’s several thousand kilometers away.

Faced with reality, Mark makes the necessary modifications to the Mars rover and begins other preparations for his wild expedition. It’s pretty much a space age version of the Oregon Trail.  As you can imagine, the logistics of getting several thousand kilometers across Mars change along the way, but the goal remains intact. Kind of how the long term goal of saving for retirement remains intact, but can be impacted by major life events along the way. In both situations, portions of the plan can become fluid, but the underlying purpose is consistent.

Mark Watney continually adjusts to whatever surprises Mars throws at him. Whether it’s the Hab (the crew’s Martian habitat) collapsing, losing communication with NASA, limited rations, or a dust storm, Watney endures. Investors will face a similar, long-winded journey with plenty of obstacles when they set out to save for retirement. Figuring out their monthly number, creating an emergency fund, having a sound financial plan, and documenting their experiences will all contribute to the journey’s success.

If you haven’t read The Martian yet, I highly recommend you do so!