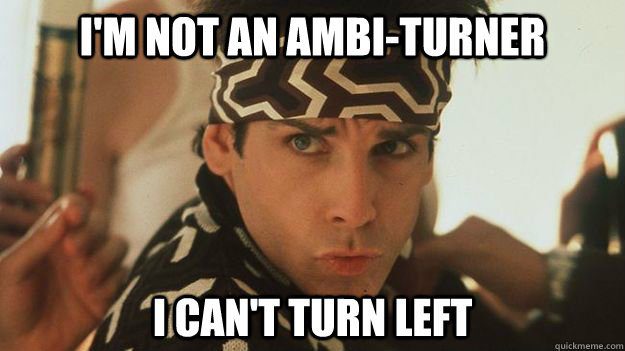 I recently learned that UPS drivers and Derek Zoolander share something in common. They can’t turn left. If you remember, Zoolander wasn’t an “ambi-turner”. While UPS drivers can technically turn left if absolutely necessary, it’s frowned upon by management.

A recent Quartz article looked into UPS’s no left turn policy. They shared how the small change allows UPS to, “use 10 million gallons less fuel, emit 20,000 tonnes (22,000 tons) less carbon dioxide, and deliver 350,000 more packages every year.” Their new delivery method has been so efficient that they’ve been able to cut the number of trucks on the road. All because they decided not to turn left.

Normally, we’d define the “best route” as the one with the shortest distance to travel. However, UPS has redefined “best” to fit their own criteria, which includes avoiding left turns. This might seem counter-intuitive if it adds distance to the driver’s trip, but it also “reduces the chances of an accident and cuts delays caused by waiting for a gap in the traffic”.

Most investors might assume the “best portfolio” is one that gets them to their goal fastest. While this isn’t a bad way to think about it, I’d caution them to consider other factors.

Before undertaking any investment strategy, an investor should be aware of its pros and cons. It’s great to choose an evidence based strategy with high historical returns. However, if it were that simple, we’d all be rich. The downside of any investment strategy should also be considered. What kind of mental toll will investing a certain way take on you? This means looking into things like periods of underperformance and historical drawdowns. Taking a strategy’s historical drawdowns and applying them to your portfolio in dollar terms is a good way to determine your ability to hold on.

An investor’s ability to hold on is a much bigger determinant of their success than nearly anything else. Michael Batnick of Ritholtz Wealth Management had an excellent post in January that illustrates this. He looked at the performance of the Vanguard Growth and Value Index Funds since their launch in late 1992. Despite plenty of jockeying over the years, these funds have returned nearly identical amounts (641% for value and 675% for growth). However, actual investors in these funds have not done the same. You can put your money into any number of great investment strategies, but without true commitment, it won’t matter.

To avoid becoming an unflattering investor return statistic, be honest with yourself about how much you can handle. Just as UPS willingly forgoes the fastest routes in favor of safer alternatives, some investors may be better suited to a more conservative allocation. An investor who undertakes an aggressive strategy, only to bail on it during tough times does their future a much greater disservice than somebody who chooses a more conservative approach but sticks with it.

Investors almost always consider a strategy’s historical returns before investing, but I question how frequently they consider their ability to hang in there when times get tough. UPS has found more efficient delivery routes by considering both speed and safety. I believe investors should do the same in their search for the “best” portfolio. They can do so by emphasizing evidence based strategies with strong historical returns. However, equal emphasis should be placed upon their ability to live through periods of underperformance and drawdowns because those will define their results more than anything else.