You cannot watch a baseball game these days without hearing about a batter’s launch angle. Launch angle is the measurement of a batted ball’s vertical trajectory.

Since 2015, hitters have begun optimizing their swings for the ideal launch angle (25-35 degrees). This is because research has shown that balls hit within that range are more likely to result in impactful hits. 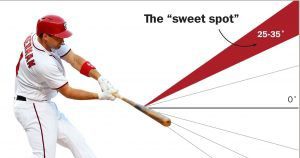 As more hitters have become launch angle disciples, pitchers have responded in kind. In 2018, they’re throwing fewer balls that lend themselves to hitters’ uppercut swings, like sinkers and low pitches. Instead, more pitchers are throwing curveballs and fastballs up in the strikezone.

The results of this counter-adjustment have yet to be fully quantified, but speak to an important point: in highly competitive fields, today’s edges often become tomorrow’s table stakes. We see this all the time in sports, as well as investing.

Winton CEO, David Harding, recently made a profound distinction in an article explaining his $30 billion investment management firm’s decision to rely less on trend following signals: “People always say to me: ‘This is what works.’ I say: ‘Worked’.”

Anything successful that can be easily and painlessly replicated will. Additionally, suckers don’t like to stay suckers, so they tend to make counter-adjustments when they find out they’re being taken advantage of. This is how edges get reduced to table stakes.

When large amounts of money are involved, I’d bet on any “unfair advantage” becoming table stakes (or useless) sooner rather than later. This is especially true in a hyper-competitive field like investing. Charley Ellis describes this phenomenon well:

“If you go back, 50 years ago there might have been 5,000 people involved in active investing. Now there are at least a million involved. And they’re smart. Well educated. They’ve all got exactly the same tools. Computers, access to the internet, Bloomberg terminals, and they’ve all got access to the same information because the SEC requires public companies to give everybody all the information they give to anybody.”

The idea of having an informational or analytical edge today is a pipe dream for almost all of us. There are too many intelligent people, all working with the same information, for an edge like that to last. However, less desirable edges stand a fighting chance because they come with a cost. A good indication of how enduring an edge will be is how uncomfortable it is to capitalize on.

Jim O’Shaughnessy was recently on the Bespoke Podcast with George Pearkes. He made an excellent comment about their own and many other successful investment strategies that might seem counterintuitive:

“You can scream from the roof tops what the secret sauce is and it doesn’t matter because people simply either won’t do it or will do it incorrectly.”

In a world where informational and analytical edges are fleeting, behavioral edges are the most important advantage available to us. Having a behavioral edge over other investors is far easier said than done. The reason this edge exists is because it’s uncomfortable, counter-intuitive, and sometimes downright painful. It means relentlessly following a financial plan and its corresponding investment portfolio, even when it feels wrong.

As I see it, there are two options: constantly and consistently find today’s edges before they become tomorrow’s table stakes or behave better. One seems far more realistic to me, but we each have to reach that conclusion on our own.