Recency bias is one of many cognitive errors that plague investors. It refers to the human tendency to overemphasize more recent data. The recency bias is most likely to be discussed in the realm of behavioral finance, however this bias can be found in every day life too. I want to share a few examples of recency bias in life, investing, and sports.

Shark River Park is one of my favorite places to run. I’ve been frequenting its trails since high school. Last weekend, I noticed that I haven’t visited the park in a while, despite continuing to run elsewhere. I didn’t realize it, but recency bias had crept its way into my life.

The last time I ran at Shark River Park, I sprained my ankle. Despite years of pleasant and injury-free runs at the park, I’ve been letting my most recent experience deter me from returning. In the meantime, my ankle has healed and I’ve continued running in other locations. I’m not any more likely to sustain an injury at Shark River Park than I am on the Bike Path in Wall Township or the boardwalk at Belmar beach, but my brain has been subconsciously keeping me from the park.

Cullen Roche of Orcam Financial actually inspired this post with something he wrote this week. Cullen wondered on Twitter if the 60/40 portfolio has grown so popular due to recency bias. If you’re unfamiliar, this refers to an investment portfolio that allocates 60% of its assets to stocks and 40% of its asset to bonds.

Cullen’s point was that this particular allocation has probably benefited nicely from the bond bull market we’ve seen over the last 35 years or so. Since around 1980, the trend of interest rates has been going in one direction…down. Bond prices and interest rates are inversely correlated, so while interest rates have been falling, bond values have been appreciating. 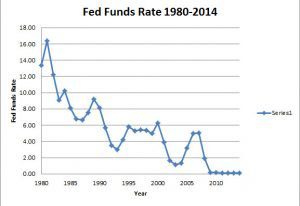 Due to the strong bond market, back-tests of standard 60/40 portfolios look very strong over the last 35 years. That’s great, but does that mean they will continue to be as strong in the future? Maybe or maybe not. As Cullen shares in his post, the bond aggregate’s performance from 1940-1980 looks vastly different than it has from 1980-today. Investors may have to check their expectations for this allocation accordingly. Cullen raises an interesting point about recency bias potentially being a contributing factor to this portfolio allocation’s popularity.

For better or worse, we’re huge fans of the New York Mets at Mullooly Asset Management. Expectations coming into the 2015 season were higher than previous years, but we never really considered the Mets to be a contender. If things went according to plan, I figured they might finish slightly above .500 for the season. That was until the Mets rattled off 11 straight wins in April. Recency bias struck again, but this time in sports.

Like many other fans, I let the team’s April performance change my expectations. The Mets were playing like the best team in baseball for a few weeks, so I believed it and it was fun. Today the Mets are 36-36, and the fans aren’t very happy.

If you told me before the season that the Mets would be .500 on June 24th, I probably would’ve said, “Yeah, that sounds about right”. Since they overperformed in April, my expectations became skewed by recency bias. I overweighted their most recent performance and its probability of continuing in the future. Apparently, some cognitive biases are so powerful that they can even overcome my extreme Met-related pessimism. Hopefully now that I’ve come to my senses, I won’t let it happen again.

Behavioral biases get the best of us all from time to time. It’s important to be able to recognize when one is affecting your decision-making process. As investors we must try to avoid these deficits the best we can. Having systems in place to guide us away from emotionally-driven decisions is a great way to start.

More on the recency bias: